It was late in the afternoon on opening day of shrimping season and two boats were coming home from a day of shrimping in McClellanville. The proud boats rode a little higher on the trailers that day because both had caught limits of shrimp to bring home for many good meals to come.

The morning started early for Richard Calhoun and Brownie Campbell who left Dillon at 5 AM that morning. By the time Hunter Jordan, Reagan Jordan, Shannon Jordan, and I reached the boat ramp, Richard and Brownie had already made a pass on their ten poles. Richard sounded happy over the phone and I thought he had a good shrimping report. “No” he said, “Just happy to be on the water. Only one shrimp so far.” I was worried that there may not be many shrimp here at this time but I told myself that the low number was due to the low tide and that the numbers will increase when the water is moving again.
We encountered heavy wind and rain along our boat ride to Cowpens Bay so Reagan and Shannon put on their rain gear. They were perfectly comfortable with their backs to the rain and continued talking and laughing. Hunter and I were facing the oncoming rain while driving and I overlooked a crab trap buoy that our engine hit. We felt the rope go tight and water splashed into the back of the boat. Luckily the rope came loose and we continued on our way.
We reached the bay and looked across for options of where to make our stand. We considered the wind and where we can at least have some blockage from the Northerly winds. We chose to go to the south of Cape Island to block the wind a bit and I hoisted my 3′ X 5′ Shrimp flag to the top of the boat. Brownie had the same flag flying over his boat but the bay was too large to make out other boats.
We found water that was about 3′ deep at low tide and shoved our poles in the ground, one by one, until a line of 10 poles was formed. Reagan kept the boat in position while Hunter and I mixed clay and fishmeal into 30 patties to use as bait. When the bait balls were ready, I drove the boat past the poles and Hunter dropped 2 bait balls beside each pole. 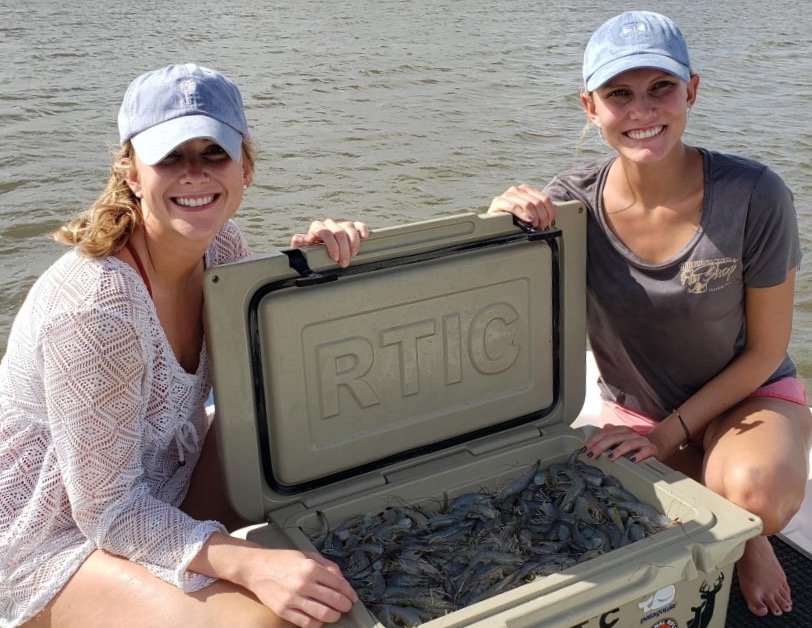 With the bait in place, we allowed the boat to drift freely while we enjoyed some refreshments and allowed time for the shrimp to discover their food. When the crew of the Varia Fit finished snacks, Hunter put the motor in gear and I loaded the cast net for my first throw. Nothing can build morale or take it faster than the results of the first cast where we get an idea of the amount of shrimp in the water. Shrimp were jumping as we approached the pole and the first cast brought in a nice load of shrimp. The rest of the poles provided similar results and after 10 casts, Hunter took the net and I took the steering wheel. The wind was aggressively blowing from the north making driving the boat and casting difficult. You cannot let the net float too long in the air or the wind will close it before it lands in the water. We had to cast the net down to the water quickly in order to land an open net. This was a difficult technique, but we did have the most encouraging crew in the bay that day. 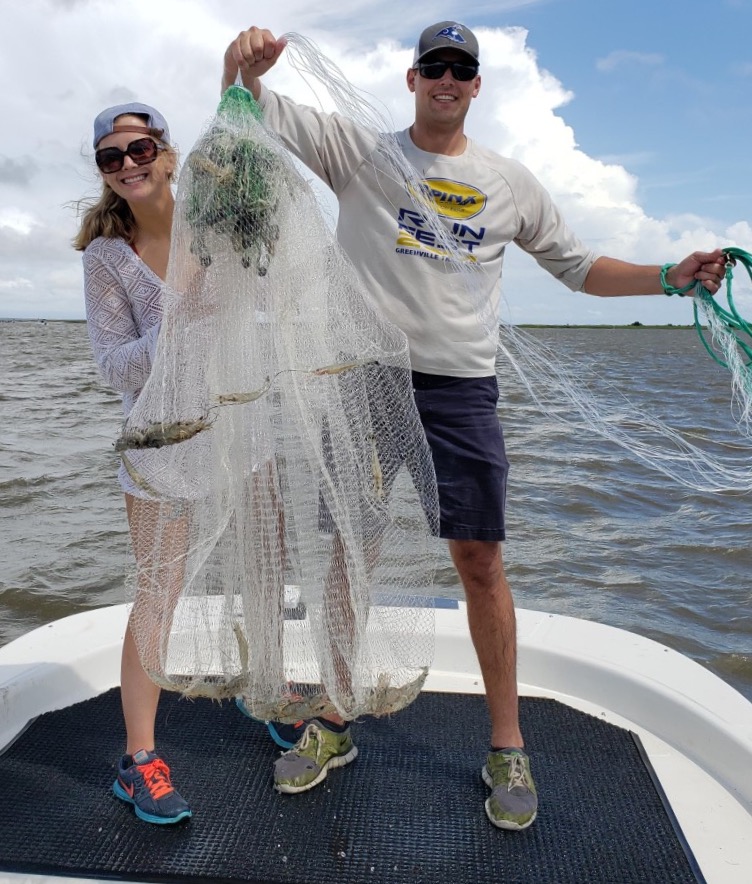 Men and friends often fuss with each other during the action of the day but on our boat, Shannon and Reagon cheered each cast, and were excited with each load. They even assured us after a bad throw that we were doing well and the next cast will be better. Morale among the crew was as high as it has ever been.
We pulled in load after load of shrimp and were able to move fast because with each load, Reagan and Shannon were sifting through the nets to empty the shrimp and to untangle the net. One of the fun things about shrimping is that it is fast action for the entire crew and the places it takes us. In the middle of the action we can almost forget to look around and enjoy the dolphins around us and the scenic Cape Romain lighthouse in the background.
I was driving the boat for Hunter to cast and Shannon answered a call on my phone. Richard called to inform us that they just pulled in a load of 150 shrimp in a single cast. By this point we were having to adjust the ice in the cooler to make room for our shrimp and it was becoming apparent that both boats would catch the limit of 48 quarts of shrimp this day.
After a few more rounds casting nets at the poles, we had filled the cooler with shrimp and could not close it with ice. Reagan, Shannon, and I worked to behead the shrimp while Hunter drove us from Cowpens Bay, through Casino Creek, and into the Intracoastal Waterway. A familiar boat approached from behind and they had the shrimp flag flying on the top. It was Richard and Brownie who caught their limit at about the same time. We pulled alongside to exchange reports for the day and then we rode as a fleet to the boat ramp with many meals of shrimp ahead.