By Betsy Finklea
The City of Dillon Downtown Development Office is forming a Dillon Downtown Merchants Association with a mission to “enhance the downtown experience for shoppers, diners, and other visitors with the goal of building business for out downtown merchants.”
The first meetings of the association were held in early November at two meeting times—9:00 a.m. and 6:00 p.m. Downtown Development Director Lisa Moody said they intended to keep two meeting times to accommodate more participants. Meetings will be limited to an hour and will be held at the Downtown Development Office in the old First Bank building. There are no fees or dues. 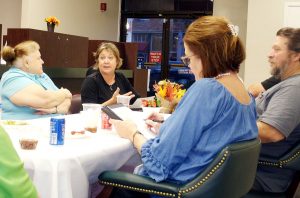 She said this group will be informal group to gather, eat, and talk things over. Moody said each month they will have a department head or council member from the city at the first part to make a report on something that may be of interest to the merchants.
They will be working on things that will be happening now such as Shop Small Saturday, holidays, sidewalk sales, etc. It’s also an excellent time for business owners to meet and get to know each other.
She said this all started out with Latta and the little pumpkins in the trees and people asking why can’t Dillon do this. She said together they could do some type of organized decorating theme. She would also like for them to start a welcome wagon.
The city manager approved a 30-second television commercial advertising Shop Small Saturday and the Christmas events in Dillon. (Filming for that has recently taken place.) She said she wanted the business owners to be as involved as possible.
Moody said there are some innovative things coming in mentioning a possible business that may be coming to the old Kintyre House location.
Moody said she feels like there are many things they can do with this organization. They plan to do some things that can be done right now to bring interest and vitality to downtown such as decorating for the holidays. She said there are little things they can do to make downtown more enticing. It was suggested to decorate the corners with lights for Christmas. A window-decorating contest will also be held.
A Christmas tree decorating contest was also discussed along with coordinating wreaths for the doors if business owners are interested.
Shop Small Saturday was also discussed. There will be a passport book and it will direct people to the windows to vote. There will also be a Shop Small market with Santa and the snow. The event will take place November 26 from 11 a.m.-2 p.m., and passports can be picked up at South Plaza.
She said she wanted this group to do some things that will make a difference right now.
The parade and tree lighting will be combined together like last year and will be held on December 1st. There is no charge unless one rents a float. The group may have a float in the Christmas parade or some kind of presence such as a car in the parade.
The Downtown Development Office’s Chit, Chat, and Chew will be held on December 2nd. It will be a holiday-themed gathering in December.
They also discussed a weekday open house sometime during the month of December. David Longacre suggested December 8th. He said the theatre was having a performance involving youth, and people could come down for the open house and then go enjoy the performance at the theatre.
Various other topics were also discussed that were of interest to the group.
These Downtown Merchant meetings will be open to the public.
If you would like to watch the evening meeting in its entirety, visit The Dillon Herald channel on YouTube.