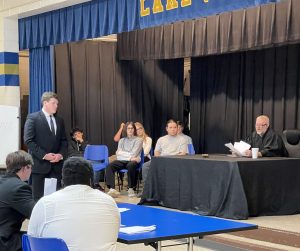 It made not just northerners, but Americans ask the serious question of whether slavery was right or wrong.
Was John Brown crazy, or was he a hero?
John Brown grew up in Connecticut and became an American abolitionist leader. Witnesses testified that John Brown took them out of their homes without their consent, and some were held captive in the armory in Harper’s Ferry. The captives were scared and feared Brown. Other witnesses claimed that they did not fear Brown and thought Brown was not dangerous. John Brown’s reasoning behind raiding Harper’s Ferry was to free the enslaved people; therefore, he would be overthrowing the government because slavery was legal in the states. John Brown said when we questioned him that “some people will view me as a hero, others a villain; I hope people will understand that I was trying to do the right thing.”
Three different trials took place. In the trials, John Brown was played by Jacob Kirby. Judge Andy Bethea ruled on this case for all three 11th grade classes.
In the first block trial, John Brown was represented by lawyers Luke King, Ashlyn Hunt, and Courtland Hardee. Luke Price and Jayden Benjamin played the role of prosecuting John Brown. In this court, the jury found John Brown to be guilty of conspiracy and not found guilty of treason and murder. He was only sentenced to five years.
In the second block trial, John Brown was represented by Layla Nobles and Scott Florea. Asher Lee, Jayden Ford, and Nick Lewellen played the role of prosecuting John Brown. In this court, the jury found John Brown guilty of all three charges: conspiracy, treason, and murder.
In the fourth block trial, Jaylen Oliver, Adrieon Alford, and Jaleya Ford represented on behalf of John Brown. James Adams, Jamarion Jones, and Chris Flores worked on behalf of prosecuting him. The jury concluded that John Brown was innocent of all charges.
This mock trial covers South Carolina DOE standard one, two, and three of South Carolina’s curriculum of U.S. History. Principal Edison Arnette, Assistant Principal Chris Ray, teacher Jacorie McCall, teacher Joan Rocha and Curriculum Coordinator Barbara Ann Jackson worked together to create a scene out of the history book to bring history back to present day. Judge Andrew Bethea, Sheriff Douglas Pernell and Dillon District Four Lynn Liebenrood, Chief Human Resource Officer, helped the students process through court proceedings.