Zachary Jamar Wilson, age 25, of Oakland, has been charged and arrested in the death of Christopher Jackson. 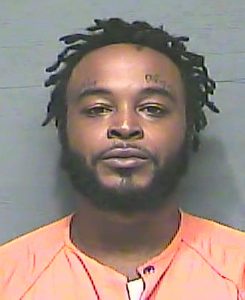 Zachary has been charged with murder and possession of a weapon during the commission of a violent crime in the death of Christopher Quenten Nigel Jackson, who was last seen on April 23rd, 2022, in the Oakland community of Dillon County.
Sheriff Douglas Pernell commended the work of SLED, SCDNR, Dillon Rescue Squad, the Dillon County Coroner’s Office, and the investigators for the great job they did working together on this case. He said it took “long hours and hard work to get this case solved.” Pernell said he appreciates the concern and help of the citizens in the community.
On April 29, 2022, the body of Christopher Jackson was found in Shoe Heel Creek off Bakers Mill Road. The body is being sent for an autopsy to determine the cause of death.
The vehicle was located April 28, 2022 off Oakland Road.
This investigation is ongoing. Anyone with information about this incident is asked to call the investigators at the Dillon County Sheriff’s Office at 843-774-1432, non-emergency central dispatch at 843-841-3707, Pee Dee Crime Stoppers at 888-274-6372 or through the Dillon County Sheriff’s Office Facebook® page. All suspects are innocent until proven guilty in court.