By John Harlow
The Dillon VFW Post 6091 held its chicken bog fund raising event on Friday, May 6th at the VFW Post. 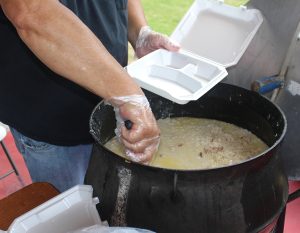 A big pot of chicken bog

This is a new fund raiser for the VFW and Committee Chairman Bobby McLean and his team arrived at the VFW at 5:30 a.m. to fire up the cookers. 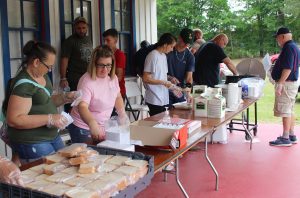 VFW members, family members, and others who wanted to help support veterans arrived throughout the morning to help serve pre-sale ticket holders and on-site ticket sale customers chicken bog plates from 11AM to 2PM. 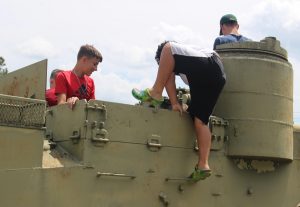 Kids coming with their parents took the opportunity to play on the armored personnel carrier located in front of the VFW Post Home. 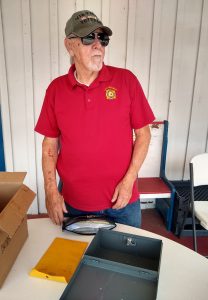 VFW Quartermaster Jim Chavis said that the VFW chicken bog exceeded its ticket sales goal. The VFW will use the proceeds to help support local VFW programs for veterans and their families and needed repairs to the Post Home. Post Commander Harry Moore thanked the VFW members and their family members for dedicating the day to the VFW, and he thanked the other volunteers who had come up to work and help support veterans. Among the servers was a gold star widow and their son. Post Quartermaster Jim Chavis said that the VFW was able to exceed its ticket sales goal because of the strong support provided by Dillon businesses, organizations, and the Dillon people who bought a ticket or gave in some other way to the fundraiser in support of veterans. He said that some donations were made directly to the VFW for veterans. VFW Post 6091 is located at 2042 Highway 9 East and meets at 7PM on the 2nd Thursday of the month. VFW membership is open to military veterans and active-duty members of the military who have honorably served and in a combat area.
More information about the South Carolina VFW is available at www.vfwsc.org.