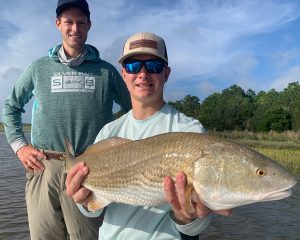 Tarpon Weekend has been a yearly trip since 2017 where three boats and crews stay in Georgetown, SC, for the weekend and as the name suggests, fish for tarpon. Over the years, the trip has proceeded through good and bad weather, catching lots of fish along the way, having a few close calls with tarpon, and only once bringing a tarpon to the side of the boat. (Captain Caleb Olney in 2019) My crew for the weekend was Dawson Jordan, Duncan McLaurin, and Ryan Stephens.
This year, we met for the first weekend of September. We stayed at the Hampton Inn and docked our three boats at adjacent boat slips. Each crew shared a room, and we would fish all day Saturday and Sunday. Our fleet fished all day on Saturday from 7 a.m. to 7 p.m. through rain and sun. We found schools of tarpon and caught red drum that the SoCo Marina Restaurant prepared for us that evening.
The next day, we left the dock at 7 a.m. and caught bait in Mud Bay as we did the day before. The sun had not yet risen, the bay was calm, and the air felt like the Fall. We caught lots of mullet, large and small, and dumped all of them in our bait tank. We rode into Winyah Bay heading back to North Santee to try again for Tarpon when I decided to try fishing a creek in Winyah Bay. We slowed down as we entered the creek, and I deployed the trolling motor at the first sight of a tailing red drum. The red drum were swimming through the marsh grass plowing their nose through the bottom. This causes their tails to show above the surface and makes them easier to stalk.
Ryan and I baited hooks with live mullet under a cork and cast them into the grass. Dawson started casting his fly rod at visible red drum, but the wind made it impossible for him to have good placement. My cork vanished and Ryan yelled, “You’ve got one!” I fought the red drum out of the grass and Ryan scooped it up in the net. My fish measured 24″ long and was just barely too big to keep. Ryan caught one that was 23” and another 19” fish, and both went into the cooler. We used the trolling motor to creep along the grass and try new spots. Ryan hooked a fish and was going to pass the rod to Dawson, but Dawson hit his head on the T-Top. Dawson didn’t have to wait long for his turn. He lodged his bobber deep in the grass and a red drum immediately went to eat the mullet. Dawson set the hook and it came out the fish’s mouth. We switched the bait to a smaller mullet which Dawson cast to the same place and got a bite. Dawson’s red drum also measured 24” and was released to fight another day.
The most fun part of the morning was seeing how active the area was. Bait fish scurried along in the grass, and we could see movements of the red drum on the hunt. Our hearts raced as we watched the red drums cross paths with our bait and the cork being pulled under.
The deck was secured, and we rode to the North Santee river to get ready for the tarpon. Ryan said, “We’ve already had a great day. Catching a tarpon would be a bonus!” We arrived in the North Santee and dropped anchor. Dawson tied a float to the anchor line so we could untie and chase a tarpon without having to retrieve the anchor. We baited hooks with our biggest live mullet and fed line until each one was at the desired distance.
We had only a moment to settle down and talk before we heard a sharp gulp sound behind the boat. We all looked up and saw a swirl in the water and a tail submerge. We froze, watching for a sign to see if the tarpon had eaten one of our baits and then, “ZZZzzzz-ZZZzzzz-ZZZZZZZ_” The top fishing rod bent under the pressure and Ryan took it from the rod holder. I sprang to the helm and cranked the Yamaha and at the same time, Dawson threw the anchor rope overboard. Ryan screamed, “He’s gonna spool me! Hurry up! He’s taken a hundred yards!” The drag on the reel continued to sing as we turned the boat around. Ryan stepped to the bow and i accellerated only fast enough for Ryan to gain on the fish but not too much that he would lose pressure.
We were in the clear now and were ready to battle the tarpon for as long as it took but the fight was long from over. If you pull too hard then the line will break but if you fight easy for too long, then the tarpon’s abrasive mouth could weaken the 100-pound leader. The tarpon surged ahead of us multiple times and Ryan braced for a jump, but the line went slack. We were all speechless and Ryan reeled in the line and hook that had just been inside the mouth of our most wanted catch. I said, “We did it once, let’s do it again.” I drove us back to the anchor and Dawson tied us up, then we baited hooks and waited, but the bite never came a second time. We finally decided to quit and will have to pursue the tarpon another year.
Although it was hard to see us loose the hard sought-after tarpon, our crew enjoyed two great days of fishing, dinner out, and night navigating the waters of Georgetown with the fleet. The never-ending chase is part of the fun and that, plus the friends made along the way keeps us coming back for more. 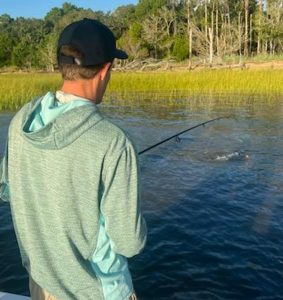 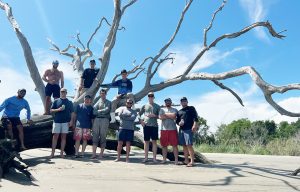 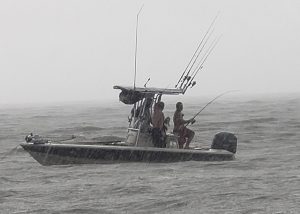