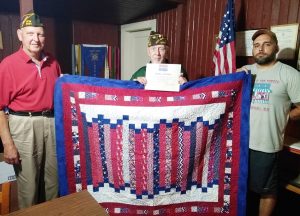 By John Harlow
Dillon resident and Vietnam War Veteran Jim Chavis was nominated by Chief Harold Hatcher of the Waccamaw Indian People for a Quilt of Valor.
The Quilts of Valor Foundation (QOVF.org) make the awards to living veterans who have been touched by war. In making the nomination,
Chief Hatcher acknowledged the Native roots of Mr. Chavis and spoke of the appreciation expressed by his tribe for him and his military service in war.
Chief Hatcher talked about the past and continued support Mr. Chavis has provided to Native veterans and their families on Veteran matters.
In approving the award, Ms. Diana Lorenz of the Horry County Quilts of Honor Valor Committee, spoke of his military service to our nation and wrote that the QOVF considered it a privilege to honor him with a Quilt.
The accompanying QOVF certificate stated, “We may never know the extent of your sacrifice and service to protect and defend the United States of America. As an expression of gratitude, you are awarded this Quilt of Valor.”
At the July stated VFW meeting, the 2021-2022 District VFW Commander Mike Mishue was present to recognize Mr. Chavis for this award and to also report that Mr. Chavis had been recognized by the VFW as an All-State Quartermaster. Commander Mishoe said that during 2021-2022, Mr. Chavis had served as both the Dillon VFW Quartermaster and the SC District 7 VFW Quartermaster where he performed both jobs in an exemplary manner deserving of VFW All-State recognition.
Dillon VFW Post 6091 Commander John Harlow said, “Jim Chavis is a long-time member of the VFW and fully deserving of this recognition. Jim is an excellent example of the #StillServing attitude demonstrated by VFW members working to help Veterans and their families. We at the VFW have come to count on Jim Chavis as a worker at the VFW.”