The City of Dillon received their audit report at a recent meeting. Smith Brooks of Kenneth Cobb & Company, P.C., reported that the City of Dillon had once again received a clean opinion on their audit, which they have had for many years.
The audit is the period ending for June 30, 2021.
To see the full discussion by Brooks and the council, view this meeting on The Dillon Herald’s channel on YouTube on the video, Dillon City Council 6 13 22.
The following is the Management’s Discussion and Analysis from the audit report:
Management of the City of Dillon provides this Management’s Discussion and Analysis for readers of the City’s financial statements. This narrative overview and analysis of the financial activities of the City of Dillon is for the fiscal year ended June 30, 2021.
We encourage readers to consider this information in conjunction with the additional information that is furnished with the City’s financial statements.
(Editor’s Note: A copy of the complete audit can be viewed at the City of Dillon office at the Dillon City-County Complex.)

FINANCIAL
HIGHLIGHTS
• The assets and deferred outflows of resources of the City exceeded its liabilities and deferred inflows of resources at fiscal year ending June 30, 2021 by $31.5 million (net position). Of this amount, $3.5 million was restricted and the City’s unrestricted net position (the amount that may be used to meet the City’s ongoing obligations to citizens and creditors) was a $2.0 million deficit for governmental activities and $316,396 excess for business-type activities.
The remaining $29.6 million of net position is for the City’s net investment in capital assets.
• The City’s total net position increased by $1,076,529.
• As of the close of the current fiscal year, the City’s governmental funds reported combined ending fund balances of $5.0 million, an increase of $887,810 in comparison with the prior year. Approximately 70 percent of this total or $3.5 million is unassigned fund balance.
• The City’s total capital assets decreased by approximately $161,000 during the current fiscal year due to capital asset additions of approximately $1.66 million offset by depreciation expense of approximately $1.82 million.
• The City’s total debt decreased by $274,606 during the current fiscal year.

Government-Wide Financial Statements
The government-wide financial statements provide a broad view of the City’s operations in a manner similar to a private-sector business.
The statement of net position presents all of the government’s assets and liabilities, with differences between the two reported as “net position.” Over time, increases or decreases in the City’s net position may serve as a useful indicator of whether the financial position of the City is improving or deteriorating.
The statement of activities presents information showing how the government’s net position changed during the most recent fiscal year. All changes in net position are reported as soon as the underlying event giving rise to the change occurs, regardless of the timing of related cash flows. Thus, revenues and expenses are reported in this statement for some items that will not result in cash flows until future fiscal periods (such as uncollected taxes and earned but unused vacation leave). This statement also presents a comparison between direct expenses and program revenues for each function of the City.
Both of the government-wide financial statements distinguish functions of the City that are principally supported by taxes and intergovernmental revenues (governmental activities) from other functions that are intended to recover all or a significant portion of their costs through user fees and charges through user fees and charges (business-type activities). The governmental activities of the city include general government, public safety, public works, sanitation, and parks and recreation. The business-type activities of the City include water and sewer operations.
The government-wide financial statements can be found immediately following this discussion and analysis.

Fund Financial Statements
A fund is a grouping of related accounts that is used to maintain control over resources that have been segregated for specific activities or objectives. The City, like other local governments, uses fund accounting to ensure and demonstrate compliance with finance-related legal requirements. All of the funds of the City can be divided into two categories: governmental funds and proprietary funds.

GOVERNMENT-WIDE FINANCIAL ANALYSIS
Net Position
As noted earlier, net position may serve over time as a useful indicator of a government’s financial position. The City’s combined net position totaled $31.5 million at the close of the most recent fiscal year.
The largest portion of the City’s net position $29.6 million reflects its investment in fixed assets such as land, building, equipment, and infrastructure (road, bridges, and other immovable assets), less any related debt used to acquire those assets that is still outstanding. The City uses these fixed assets to provide services to citizens; consequentially, these assets are not available for future spending. Although the City’s investment in its fixed assets is reported net of related debt, it should be noted that the resources needed to repay this debt must be provided from other sources, since the fixed assets themselves cannot be used to liquidate these liabilities.
A portion of the City’s net position (11 percent) represents resources that are subject to external restrictions on how they may be used. The remaining balance of unrestricted net position may be used to meet the City’s ongoing obligations to citizens and creditors. Internally imposed designations of resources are not presented as restricted net position. At the end of the current fiscal year, the City is able to report positive balances in total net position for the government as a whole, as well as for its separate governmental and business-type activities.

Changes in Net Position
The City’s net position increased by $1.1 million. Approximately 16 percent of the City’s total revenue came from property taxes, while 15 percent resulted from grants and contributions (including state and federal aid). Charges for various goods and services. The largest expenses were for public safety and water and sewer.

GENERAL FUND
BUDGETARY
HIGHLIGHTS
The original approved budget was not amended for the fiscal year ended June 30, 2021.
The City’s actual results for the General Fund were different than budgeted amounts due to the following:
•Actual revenues of approximately $6,824,000 exceeded budget by $995,000. Property taxes were $210,000 and licenses and permits were $246,000 over budget and grant revenues of $433,000 were not budgeted.

FIXED ASSET AND DEBT ADMINISTRATION
Fixed Assets
The City’s investment in fixed assets for its governmental and business-type activities as of June 30, 2021, amounts to $69.6 million, less accumulated depreciation of $38.0 million, leaving a net book value of $31.6 million. This investment in fixed assets includes land, building, improvements, equipment, and infrastructure. Infrastructure assets are items that are normally immovable and of value only to the City, such as roads, bridges, drainage systems and similar items.
The decrease in the City’s investment in fixed assets for the current fiscal year was approximately $161,000. Actual expenditures to purchase or construct capital assets was $1.7 million for the year. The City’s total depreciation expense of $1.8 million was netted with the following assets that were added to the depreciation schedule: council – dispenser island; police – vehicles, drones, and laptops; fire – vehicle; street – mower, rotary cutter, and bush hog; wellness center – heat pump and outdoor gym equipment; golf course – rehab pump and well; water and sewer – many improvements to the water, sewer, and wastewater treatment plant systems. The City also received two parcels of real estate during this fiscal year that totaled $213,000 in value.
Additional information on the City’s capital assets can be found in Note 2C of the notes to the financial statements of this report.

Debt Activity
The City of Dillon’s total debt decreased by $274,606 during the current year. Debt was added in the governmental activities for the purchase of various equipment. Additional information on the City’s long-term debt obligations can be found in Note 2E of the notes to the financial statements of this report.

NEXT YEAR’S BUDGET AND RATES
The City has approved a balanced budget for the fiscal year ended June 30, 2022. The following are some of the factors considered in preparing this budget:
•Increased property taxes by 2 mills.
•Increased sanitation and water and sewer rates by 3%.
•The increases to the above revenues were to help offset increases to health insurance and retirement expenditures/expenses.

REQUEST FOR
INFORMATION
This financial report is designed to provide a general overview of City of Dillon’s finances for all of City of Dillon’s citizens, taxpayers, customers and investors and creditors. This financial report seeks to demonstrate the City’s accountability for the money it receives. Questions concerning any of the information provided in this report or request for additional information should be addressed to: City of Dillon, P.O. Box 431, Dillon, S.C. 29536. 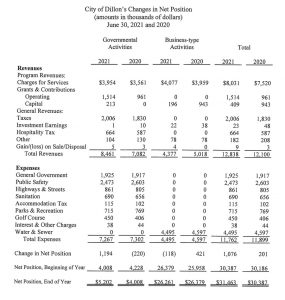