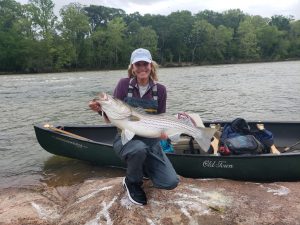 The Spring Run for striped bass has begun as they migrate from Lake Marion, up the Congaree River, into Columbia to spawn. Unlike Largemouth Bass, Striper live out their lives in the lakes or ocean and migrate up into rivers to spawn. The spring spawning run creates the unique opportunity to fish for striper casting artificial baits in fast flowing water. The reports started to show up that people were catching striper and so our group made 6 trips individually wading out to various spots with no luck. On one such trip I observed a fisherman who caught a few stripers while standing on a rock and I decided that I would fish from there next time I had my canoe.
Ryan Stephens, Dawson Jordan, Shannon Jordan, and I planned to make a trip together on Saturday, April 16th. While Shannon and I loaded the boat on Friday night, Ryan was already on the Congaree and fished until midnight. His report was like our other attempts, not catching anything but a crappie, but we hoped our luck would change the next day. 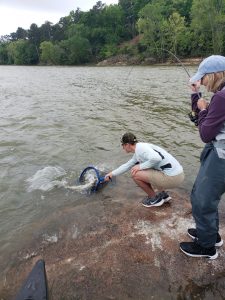