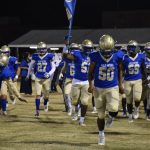 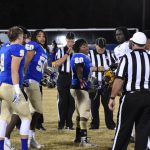 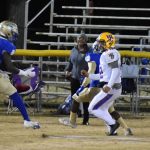 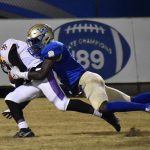 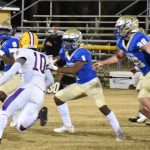 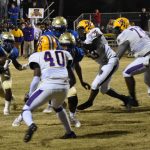 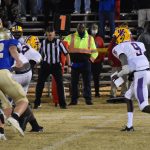 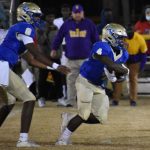 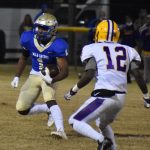 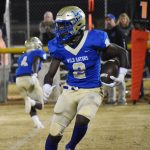 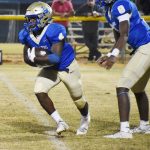 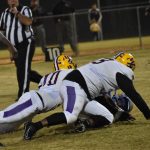 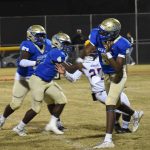 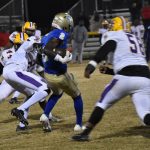 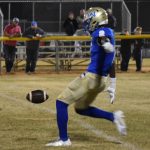 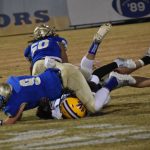 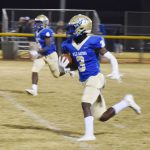 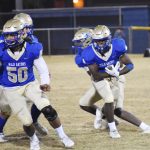 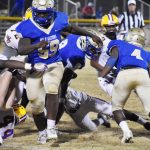 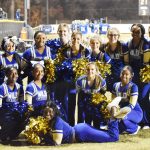 By Craig Brown
The Warriors of Whale Branch High School ended the hopes of the Lake View High Wild Gators returning to Columbia Friday night in Lake View with the Warriors getting a 27-12 second-round playoff win. Not taking anything away from the Warriors as they played excellent but the Wild Gators did not play with the same intensity as they did in past weeks. If the two teams had met last week the outcome might be different. This is no fought of the Lake View coaching staff as they are among the best in the state. It just seems that every team has a bad game at least once a year and sadly this seemed to be the Wild Gators time. It was Lake View’s passing attack led by quarterback Derrick Bethea with top receivers Shaheed Dawkins and Trey Page versus the speed of Warrior running backs Darrell Cummings and Joseph Hicks. Both teams were hard-hitting on the defensive side of the ball.
On the Warriors’ first possession of the game, quarterback Kai’shawn Jenkins’ pass was intercepted by Gator DB Tyrell Foxworth with Foxworth returning the ball 42 yards for the touchdown. The conversion failed holding the Gators to a 6-0 lead with 11:12 left in the first quarter.
The Warriors would not be denied on their second possession with Hicks finishing the drive with a five-yard touchdown run. Hyo Amano added the point after kick to put the Warriors up 7-6 with 8:35 left in the first quarter. The first quarter would end with the Warriors holding the one-point lead.
Although Jenkins would not have have the passing numbers as Lake View’s Bethea he would find Hicks open for an 11-yard touchdown pass with 10:01 left in the second quarter. Amano’s kick increased the Warrior lead to 14-6.
Late in the second quarter, Cummings crossed the goal line on a 12-yard run. Amano added the point after kick to up the Warrior lead to 21-6 with 3:38 left in the second quarter. The Warriors took this lead into the halftime break.
The third quarter was a hard-hitting defensive battle with neither side finding the end-zone.
Midway in the fourth quarter, Marvin Gordon found the end-zone for the Wild Gators on a three-yard run. The conversion failed and with 5:26 left in the fourth quarter the Gators had cut the Warrior lead to 21-12.
The Wild Gators had made some uncharacteristic mistakes in this game but a fumble on their one-yard line with the Warriors recovering was the final nail in the coffin. Jakhi Pusha running from the Wildcat took it in for the game’s final score. For some reason the Warriors decided to go for two points but the Gators kept them out of the end-zone.
With only 54 seconds left in the game after the score, the Wild Gators had no time to mount a comeback giving the Warriors the 27-12 playoff win.
I have covered 9 of Lake View’s 12 games this season, and team statistician Jimmy Sweat has been a great help to me as he is every year in presenting the most accurate team stats for the games. Sweat had the following stats for this game: on offense: Derrick Bethea was 13 of 24 for 196 yards passing and added 20 yards rushing; Shaheed Dawkins caught seven passes for 122 yards, Trey Page caught four passes for 58 yards, Treyvon Bellmon had 35 yards on 10 carries and caught three passes for 18 yards, Marvin Gordon had 18 yards on four carries with a touchdown, and Luke King completed a pass for 12 yards. On defense: Hunter Norton and Raekwon McNeil had eight tackles each with Norton adding two quarterback sacks; Sevon Nichols had six tackles; Luke King and Michael McDaniel had five tackles each; Jaymeer Brown and Kamarik Bethea had four tackle each; Camden Umphries, Jayden Ford, Tyrell Foxworth, Jayden Benjamin, and Braylon Worley had three tackles each with Foxworth getting an interception and returning it for 42 yards and a touchdown; Shaheed Dawkins had two tackles; and Luke Price added a tackle. Head Coach Daryl King and Jimmy Sweat added the following individual statistics: Derrick Bethea became the first quarterback in Lake View history to pass for more than 2,000 yards, Shaheed Dawkins went over 1,000 yards receiving, Trey Page had 728 yards in receptions, Trevon Bellmon had 1,145 yards rushing with 14 TDs. Bellmon missed some games because of an off-campus injury or his stats may have exceeded 1,500, and Hunter Norton had over 100 tackles.
Many fans did not expect this team to be as good as it was as Lake View graduated a ton of seniors from last year’s Lower State Champions but credit Coach King and his staff: Cloy Ford, Larry Inman, Andy Ford, Kip Herlong, Jeffery Ceasar, Johnny Dew, Terry Lasyone, and Glenn Edge for an outstanding job in getting the team to this mark. Mostiler Rogers with assistants Boone Sweat and Landon King made the sidelines run smoothly.
The Wild Gator football season is over but I fully expect Coach King and his very able coaching staff to have the Wild Gators back in the running in 2022. Football fans in Dillon County salute the Wild Gators on a great season.