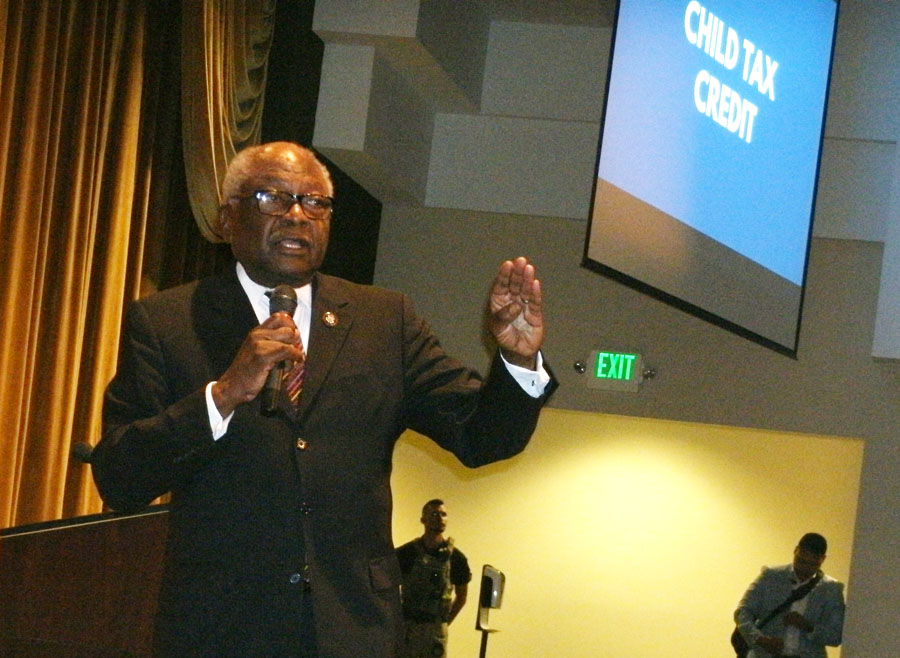 Clyburn, who has been in Congress for 29 years, began his comments with COVID-19. Part of his responsibilities in Congress is as chair of the House Select Subcommittee on the coronavirus overseeing about $4 trillion to make sure that money meets the three E test. The three “E”s are that the money is being spent efficiently, effectively, and equitably.
On July 1st, the committee had a hearing because the COVID-19 numbers are ticking back up. Clyburn said on July 13th, he woke up to disturbing news all regarding the Delta variant in various parts of the country. He said most of the people who are contracting the virus are not vaccinated. Clyburn said it is incumbent upon us to make ourselves committees of one to talk to our family members, to talk to our church members, or whoever. He said if this thing goes up that we will be shut down again, and nobody wants that. He said we have to get serious about this. We are well below the 70 percent vaccinated needed for herd immunity, but he said they are still pushing. He said there are several states, South Carolina being one of them, who don’t appear to be taking the virus seriously enough. Clyburn said there are some with crazy ideas about why not to take the vaccine. He said this idea that the vaccine is some attempt to destroy black people is foolishness. “Nothing could be further from the truth,” said Clyburn. He said we have to get beyond this vaccine hesitancy,
Clyburn said he was young when the polio vaccine came out, and he took it like others at his school. He said he didn’t say I’m not going to take this vaccine because the people who came up with it are white. He said he didn’t care about the skin color of who came up with it. He said he also didn’t know anyone who didn’t take a blood transfusion because the person who came up with the method was a black man named Charles Drew. “We’ve got to stop this foolishness right now,” he said.
He said the vaccines include the two-shot Pfizer, which he took; the two-shot Moderna; and the one-shot Johnson and Johnson. He said the lead scientist on the Moderna vaccine was a black woman in her thirties. He asked if anyone thought she spent her life creating something that would destroy her parents. He said we have got to take the vaccine and do what we have to do to get this virus behind us.
He then spoke about the American Rescue Act. He said on July 15, the day of the meeting, some people got some money in their account for their children through the child tax credit. He said this is something they are doing for the families, just like they gave money to corporations. He said not to let anyone shame you about receiving this money. This is not a giveaway. He explained the child tax credit. In the Seventh District, 142,000 will receive the child tax credit. This lifts 13,100 children out of poverty in the Seventh District, including 5,000 children under age six.
Clyburn said the American Rescue Plan also lowers health insurance costs for nine million Americans who buy health insurance through healthcare.gov.
Clyburn also spoke about Medicaid expansion. He believes South Carolina has made a big mistake by not expanding Medicare. He said South Carolina is one of 12 states who have not done this. If South Carolina expanded Medicaid, Clyburn said the state would receive an additional $600 million in federal funds over the next two years, would have fewer uninsured residents, and would reduce racial health disparities. He said the reasoning not to expand Medicaid it about like the reasoning behind not taking the vaccine.
He said they are working to extending the child tax credit beyond one year especially if the virus is in our future. Another thing is expanding tax credits for healthcare.gov. The third thing is closing the Medicaid gap in 12 states. He also spoke about broadband.
Also recognized during the presentation was Fitzhugh Bethea, a Latta High School graduate, who is working in Clyburn’s office.
If you would like to see Congressman Clyburn’s comments in their entirety, the video of the meeting appears on The Dillon Herald’s channel on YouTube.