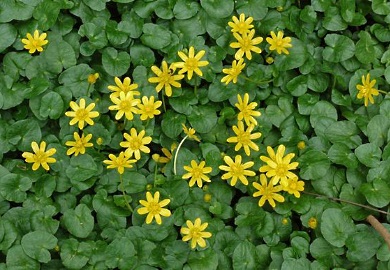 The sound of sniffles and the yellow tint on cars and buildings seen through watery eyes tells us spring is upon us. Trees and plants are blooming, including the Ficaria verna, commonly known as Fig buttercup, which is invasive.
Not to be confused with the non-invasive Packera glabella, or Butterweed, there is more to the Fig buttercup than meets the eye. Its bright yellow petals contrast against its dark green leaves and outshines the native plants that once lived on several Carolina riverbanks.
Surveys conducted by the Department of Plant Industry (DPI) at Clemson University, a state regulatory agency charged with protecting South Carolina from foreign plant predators, show that colonies of Fig buttercup have established themselves along tributaries of the Reedy River in Greenville and the Catawba River in Rock Hill.
“Invasive species (plant or animal) disrupt natural conditions by outcompeting native species creating a cascade of failures from ecosystem processes to loss of indigenous biodiversity. Not to mention that they can wreak havoc on crops and natural areas managed by SCDNR resulting in exorbitant costs to control (total removal is almost never possible) their spread,” said South Carolina Department of Natural Resources’ Assistant Botanist Herrick Brown.
Compared to some parts of the country, infestations in the Southeast are relatively few and far between, thus many folks have not yet encountered it. We do, however, have several large infestations, a down payment on what it can do in the South’s riparian zones.
If new populations are discovered, the public should contact the Department of Plant Industry immediately, and they will handle treatment or removal. Citizens should not attempt to remove the plants themselves—minimizing the potential for inadvertent spread.
Suspected cases can be reported online at invasives@clemson.edu or by calling DPI at 864-646-2140.