Since my college friend Andrew Case made his move to Alaska with the Army, we had been in discussion about making a trip to visit and see the last frontier. 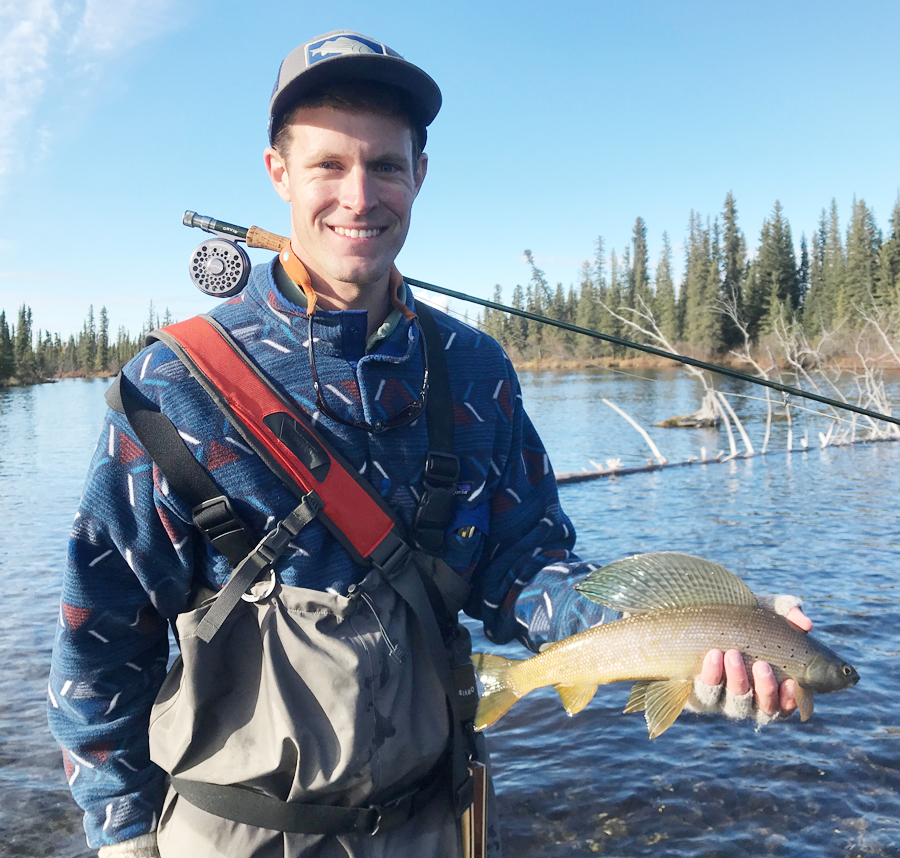 That time finally came towards the end of September when Dawson Jordan and I boarded a plane to fly farther than ever before.
We arrived in Fairbanks late at night where Andrew picked us up and drove to his cabin in Delta Junction.
There was not a lot to be seen on our rainy night time drive through the spruce forest except for when we passed the North Pole and Santa’s actual workshop!
A quick glance would tell you that homes in this place are built to hold heat, and Andrew’s studio cabin had two wood stoves along with a heater. The fifteen hours of travel made a long day, and we went straight to sleep.
The top priority the next morning was to get to the fly shop. There we started with coffee, a few flies, and heard reports on grayling and silver salmon.
The arctic grayling live in the Clearwater River year- round, but the silver salmon that are present have already swam over a thousand miles and still have farther to go on their one-way spawning run.
Andrew talked about the fast -action dry fly grayling fishing as we looked over the river for fish breaking on top. We didn’t see any but decided to walk out and try our luck. The water is spring fed and reaches about 38º F at the warmest. The current was strong and the rocks below were clearly visible. All morning we worked the river and the fish that I wrote off as an easy win soon had me scratching my head for new tricks.
I moved on up river, now four hours in and flies could be seen hatching and dipping in the river. I cast my dry fly into the current and watched it float downstream. SPLACK!
Before I could react, a grayling viciously swiped the fly off the surface. The bowl of slack line ruined my hook set and my first chance eluded me. Careful not to allow the blunder to happen again, I managed my line and with the second hit, I raised the 4-weight fly rod to set the hook and felt the fish come to life.
The grayling put on a great show and the dorsal fin was illuminated in orange, blue, green, and black. First fish in the net, and I’m fishing for real now.
I took another cast and another fish, this time even larger than the one before. I was worried that Dawson was missing the action and called for him. No answer.
I rushed down stream and as it turns out, Dawson had found a school of his own. At this point the whole river came alive all at once and you could not be anywhere without fish busting the surface around you.
I waded towards Dawson and the clear water deceived me to anticipate shallow, but when I got too deep, the current pushed me in.
The freezing water rolled down my back to my legs and filled at my feet. It was hard to fish numb but being in such a remarkable place, I would not allow myself to quit.
Fish after fish, we stood together laughing and talking, each of us having lost count of fish. We released all of the fish that we caught and even though each of us had caught close to 30, it never got old. This time reminded me of dove hunting because as doves sharpen a Hunter’s aim, so do grayling improve an angler’s fly cast.
A man from Fairbanks fished nearby and landed the first salmon I have ever seen, a Coho. It was bright with color and released to swim on to spawn.
The sun was dropping behind the Alaska Range Mountains, and we retired to the Clearwater lodge for burgers and drinks with friends we met on the river.
We had now claimed the first target fish of the trip and returned to the cabin.
As the 4Runner pulled into the driveway, we woke a group of moose who were sleeping in the front yard.
It was no big deal to Andrew that they just trotted in front of the car into the woods.
That night we loaded up the car for the great road trip which was to start early the next morning.