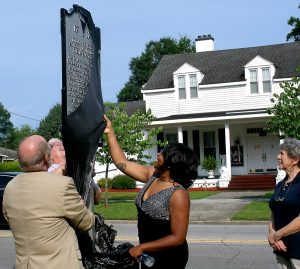 By Betsy Finklea
The Dillon Historic School Foundation held a ceremony recently to unveil the historical marker at the J.V. Martin Junior High School auditorium.
The welcome was given by DHSF Chairman Gerald Berry. The invocation was given by Pastor Anthony Alford of Shiloh United Methodist Church. 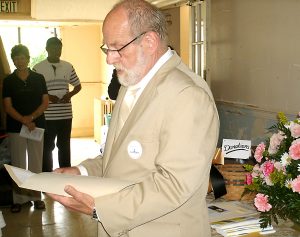 Remarks then began. Mayor Todd Davis said a lot of hard work had gone into the project. He said many came through the halls of J.V. Martin and left with fonder memories. He talked about those who dedicated their time and efforts and those who will continue to do so to make this restoration a reality. Dillon District Four Superintendent Ray Rogers said this had been a long journey for the group. He said Bob Braddy came to him with the dream of restoring the auditorium. This group continued the dream and every time they met an obstacle, they found a way around it. He said while the group had already done a lot of work, there was still much hard work to do. He said this will be a treasure for years to come, and this facility had touched many in the community. Dillon County Council Chairman T.F. “Buzzy” Finklea, Jr., said he was glad to have a group preserving this historical treasure. Sheriff Major Hulon and Latta Police Chief Crystal Moore also offered comments.
Betty Lou Barclay, a member of the DHSF, said it was a big accomplishment for the DHSF to get the auditorium on the National Register of Historic Buildings. She said it took a great deal of perseverance, dedication, and stubbornness to get where they are today. She spoke about the importance of preserving historic treasure. 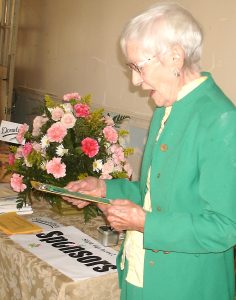 Berry then gave the history and mission of the DHSF. The history and goals as printed in the DHSF brochure reads as follows:
The Dillon Historic School Foundation (DHSF) was established in 2010 by a group of interest citizens with two primary goals. The first of these goals was having the DHS/JVM auditorium, gymnasium, cafeteria and the Dillon Graded School (1896) recognized by the National Register of Historic Places. This first goal was successfully accomplished by DHSF in 2014.
The Foundation’s second goal is to renovate, refurbish, and fully restore the 1936 auditorium as a cultural center and an arts venue to serve the local community. The auditorium has a seating capacity of 1046, a 60-foot stage with ample wing space, a projection room, the original footlights, unparalleled acoustics, and spacious lobbies on the first level and on the mezzanine.
Miss Helen Culp, prestigious band director of DHS for many years may have said it best:
“After many years of use, multiple repairs are needed to return this fine ‘Old Lady’ to former beauty and usefulness.”
DHSF actively promotes a once-in-a-lifetime opportunity to reopen the auditorium doors as a legacy for generations to come. DHSF urges the Dillon Community to bring the town’s rich cultural past to the present by supporting the auditorium restoration.
The mission of the Dillon Historic School Foundation is to renovate and restore the former Dillon High School Auditorium. Share the dream of preserving this beautiful, irreplaceable building so that it can once again be the entertainment and cultural center of our Dillon Community and our neighbors.
Those in attendance sang the Dillon High School alma mater led by Gerald Berry.
The group then adjourned outside where the marker was unveiled.
The marker reads as follows: 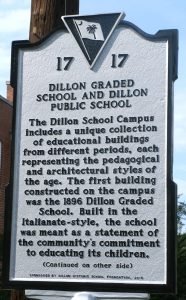 DILLON GRADED SCHOOL AND DILLON PUBLIC SCHOOL
The Dillon School Campus includes a unique collection of educational buildings from different periods, each representing the pedagogical and architectural styles of the age. The first building constructed on the campus was the 1896 Dillon Graded School. Built in the Italianate-style, the schoolwas meant as a statement ofthe community’s commitmentto educating its children. Auditorium and gymnasium additions built in 1936 display a striped classicismtypical of Public Works  Administration (PWA) funded building projects. The 1957 cafeteria addition exhibits then-prevailing thinking that one-story schools with window walls for light and circulation were best. The complex was listed in the  National Register of  Historic Places in 2014.  Sponsored by the Dillon Historic School Foundation, 2015 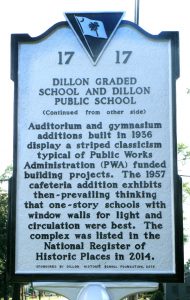 The benediction was given by Rev. John Bumgardner, pastor of Dillon First Presbyterian Church. Several in attendance then went and visited the auditorium.

END_OF_DOCUMENT_TOKEN_TO_BE_REPLACED

Give me six hours to chop down a tree and I will spend the first four sharpening the axe.
Abraham Lincoln
Some of the most fun people I know are scientists.
Mae Jemison