If someone would have told me some years ago that I would one day be so close to a canine, that I literally share snacks with while we are riding, I would have called them crazy, said they were “out to lunch”, or that their elevator did not go all the way up to the top floor.  That was something that other people did, you know, those who are eccentric like Leona Helmsley, who left her loving pooch, Trouble, a $12 million trust fund in her will some years ago.  Or even perhaps like one of our renowned citizens, who recently passed away, who was well known for taking in stray dogs and taking good care of them. 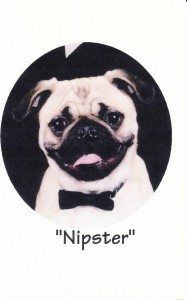 These individuals fit the mold, but certainly not me, who frowned on such bizarre behavior and idiotic interaction with dogs, cats, or any other pet.  I felt this way until the arrival of a little Chinese pug named Nip who came into my life a little over eight years ago.  I have had dogs before which I treated very humanely.  They were always dogs that stayed outside and were never allowed to stay in the house.  However, Nip’s arrival changed all of that from the onset.  He was afforded the convenience and luxury of living on the inside.  This little bandit faced dog, that has a tail that curls up from the time he was a puppy, established himself as being more than just a pet.  Instead, he became a beloved part of the family.   If truth be told, he became a spoiled canine child who almost always gets his way.  As stated, I never thought in my wildest dreams that I would be so close and attached to my little, greedy, and pudgy pal.
Every weekday morning, I take him for a walk. Sometimes, I wonder if I am walking him or if he is walking me.  Even during this time, Mr. Nip (as I sometimes refer to him) seeks to exert his authority and will often challenge me for control.  Many times, I’ve had to pull on the leash attached to the harness around his body to let him know that I am the alpha male and not him.  I do not know which one of us looks to our daily weekday morning rides the most.  At the beginning, I called myself giving the little fellow a break and a time to be out of the house.  However, as days have turned into weeks, and weeks into months, and months into years of us riding together, I cannot truly say which of us loves the other’s company the most during these cherished rides.  I will confess that there was a time when he was away in Florence with his human mother; I missed him immensely.  I tried to do my morning cruise and mobile meditation without my little buddy, but it seemed so empty and uninspiring.  His presence had brought something to these morning rides that I was just beginning to realize.  He would give me his undivided attention and would look straight at me with those big, brown pop-eyes.  He would try to get as close to me as possible by putting his two front legs on the console that separates the driver’s seat from the passenger’s seat.  Regardless of what I am listening to, he listens to it too and seems to enjoy it as much as I do.  One thing I can say about my little buddy is that while we are riding, he has never complained about my praying or singing praise songs.  Everything I have shared with him has been in confidence and he has never betrayed my trust.  Little wonder why dogs are man’s best friends.  I am his primary groomer and caregiver.  I am also the one who takes him to the veterinarian, as well as the person who gives him his monthly medications and daily vitamins.  I delight in doing all these things for my little buddy.  I will continue to do all that I can do to assure that he lives a long time.  In doing so, I look forward to the times of sharing and fellowship that we have.  His company is truly enriching and therapeutic to me.  However, in all actuality, there is another person who he prefers over me.  When she is around, I am a distant second in his love and loyalty.  Although he is my pal and road dog, he is my wife’s baby, who she affectionately refers to as “Nipster”.  I was a little jealous at first, but I have learned to live with it.  I guess I had rather have a part of my little buddy’s time and affection rather than none at all.
In closing, I never imagined that one day I would be in the same position as those people who I so sharply criticized and even mocked.  Now I understand why certain people love and care for their dogs so much.  Now I know first hand why some people do not mind their dogs kissing on them and giving them the same attention and affection that they give another human.  If their dog gives them as much joy and affection as Nip gives us, then they are worthy to receive it in return.  I do not mind folks deriding me and saying that, “Michael Goings has gone to the dogs.”  Perhaps it’s just payback time for me and what I said derogatively about others.  So if it must come, then let it come.  My time and fellowship with my little canine son is worth it all…

There are no shortcuts to any place worth going.
Beverly Sills
Life is pretty simple: You do some stuff. Most fails. Some works. You do more of what works. If it works big, others quickly copy it. Then you do something else. The trick is the doing something else.
Leonardo da Vinci
+81
°
F
H: +81°
L: +58°
Dillon
See 7-Day Forecast