Contributed
After having our scheduled boat trip tour through the Santee Sanctuary cancelled due to the threat of severe weather in April, the Dillon Garden Club held its last spring meeting in the “Carolina Community” at the home of Bo and Patti McInnis.
Although we had visited the historic home site once before, this year, the weather was warmer, and we toured the area behind their house on the Little Pee Dee River. 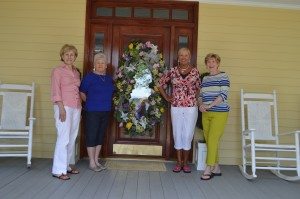 The McInnis family has a long winding dock through the massive Cypress trees that juts out into the water.  Some of these trees are estimated to be several hundred years old.  We learned the average lives of these Cypress are 800 years or longer. The platform comes complete with a swing perfect for lazy afternoons watching the water ripple against the ancient Cypress knees as it travels downstream.
Then we all scrambled into trucks and rode to the old Parrish Mill Recreation Club where we ventured out onto the platform from which the large, knotted rope hangs for swinging out and dropping into the cool, dark water. Two Cypress trees hold up the platform with the rope swing.  The county line is between the two trees.  One Cypress has a spike in it to mark the Dillon County side; the other has a spike for Marlboro County. It is thought that the spikes at one time marked the Georgetown district formed in 1768. In 1785 four subordinate counties were formed out of the Georgetown district known today as Horry, Marion, Williamsburg, and Georgetown Counties. Dillon County was later formed from a portion of Marion County in 1910.
The trees are still used to determine the present day line of Marlboro and Dillon County.
For the even more adventurous swimmers, there were wooden boards nailed to the side of a taller Cypress tree across the stream from which many a “high dive” was made by fearless young men and women in years past. The McInnis family closed the recreation club years ago to the public but it is still used by family and friends.
The business part of the meeting included reports from various committees about the projects the club completed in the first part of 2014.
We discussed the possibilities of fund raisers, projects, speakers, and programs for the fall. Jan Austin then installed the officers for next year: Pat Laird, President, Susan Kannaday, Vice-President, and Betty Stout, Treasurer. Bonnie Rogers who will serve as secretary was absent.
After one more trip to the goodie table, the meeting was adjourned.