Jigger pole fishing is an old classic way to catch fish along riverbanks and ponds where the good spots are hard to reach by casting. A jigger pole is a long telescoping cane pole that extends to at least 18 or 20 feet. I tie a trailer hook to another hook to hold a worm and pork rind together. The hook is tied on heavy line, 6 to 8 inches from the rod tip but the line continues all the way to the handle of the rod. I do this in case a giant breaks the tip off my rod, i will still be able to catch it.
Jigger pole fishing is a team effort. One person paddles the boat while the other fishes. I like to paddle against the current while I fish because I can move slower and have better control. My grandfather, AB Jordan, says that you need to paddle as slowly as you can, and then go slower. Allowing ripples to get ahead of the boat is another problem. This kind of fishing is so close that a bass will be spooked if it senses the unnatural motion on the surface. The angler on the bow can use the slow pace to fish up close around every stump and under every low lying tree limb. All that is needed to be successful on a late summer evening is patience, a strong back, and strong shoulders.
Ryan Stephens and I took my canoe to Harllee’s Bridge on Sunday evening and paddled up river into a slough. The water was still at that point and we stopped to cast worms-catching 2 mud fish and a bass. I have not eaten a mud fish but I am sure some people know how to cook them well. I enjoy catching mud fish because of their size and fight. Ryan caught the bass while I got my line stuck in a tree. The worm was dangling over the water so I bounced it to ripple the surface. Out of nowhere a hungry bass broke the surface and I set the hook. The bass got my line out of the tree but i lost him because I could not keep tension on it.
The sun was getting low behind the trees and so Ryan and I tucked our spinning rods away and extended the Jigger Pole. Ryan was in the front and carefully fished the bank. My focus was to keep Ryan in a good position to reach the bank at all times even if that meant paddling through a branch or spider web. The spiders did not bother me because Ryan caught them all. Ryan’s attention was caught by a dark shady corner at a bend up river from us and so we approached it carefully. Ryan was shaking the worm in the water and WHAM! a bass lurched out from the cove and hit the worm. The tip was bent but it let go. The fish came around again and hit but we still lost it. After seeing this we concluded that the worm was too long and we cut the tail off.
We continued up river despite the dark and caught two more bass and one more mud fish. It is important that the angler remembers not to lift his pole as he might do with a reel. A jigger pole can handle huge fish when used correctly, but if the angler raises the pole then it will likely break in half. Acquiring the skill to follow the fish with a 20 foot rod as it swims to, from, and under the boat can take some practice but your whole body gets involved in the fight when it is this close.
The moon was high in the sky as we paddled down river to the bridge and the tree line against the sky helped to show the river’s path. I get a thrill out of fishing with a jigger pole because of the intense focus and the surprise that is sure to come.
The angler’s eyes are fixed on such a small area focusing on one worm and one stump at a time; never knowing about what size bass could be an inch beneath it ready to strike. A lure on a jigger pole receives some of the most vicious strikes that i have seen from bass.
There are plenty of surprises on the Little Pee Dee just as I never knew we had pike down south until I caught one on a jigger pole.
Jigger pole fishing is a great way to get back to the basics. I imagine the Native Americans using the same techniques to catch fish along the Little Pee Dee and Lumber Rivers and it was a favorite for my grandfather and great grandfather. It is easy to get started, so grab a cane pole at Lane’s Bait and Tackle and hit the river.

Apr
17
Sat
10:00 am Latta Springfest
Latta Springfest
Apr 17 @ 10:00 am – 5:00 pm
Once again the time has come for Latta Springfest! Mark your calendars for April 17, 2021 and enjoy our wonderful festival. April 17 from 10:00 until 5:00 – Latta will hold their annual Latta Springfest. Come and enjoy fabulous food, handmade crafts, and delightful entertainment. There will be something for people of all ages. This…

END_OF_DOCUMENT_TOKEN_TO_BE_REPLACED 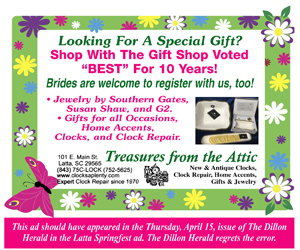