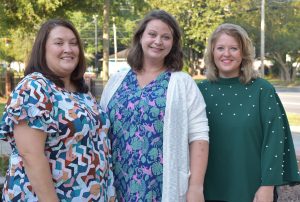 The Teachers of the Year for each school in Dillon District Three (Latta) are as follows: April Dailey (Latta High School), Leann Lane (Latta Middle School), and Diana Kirk (Latta Elementary School).
Mrs. April Dailey is a 1995 graduate of Marion High School in Marion, SC. In 1999, Mrs. Dailey earned a Bachelor of Science Degree in Biology and a minor in Chemistry/Computer Science from Francis Marion University. In 2013, she earned her Master’s Degree in Education Administration from Winthrop University.
Mrs. Leann Lane is a 1997 graduate of Lake View High School. In 2012, Mrs. Lane earned her Bachelors of Science Degree in Elementary Education from the University of Phoenix.
Mrs. Diana Kirk is a 2002 graduate of Socastee High School in Myrtle Beach. In 2007, Mrs. Kirk earned a Bachelor of Science Degree in Early Childhood Education from Coastal Carolina University. After finding her love for the Montessori method of teaching, she earned her Master of Education Degree in Montessori Education from Lander University in 2013. Dillon District Three would like to announce Diana Kirk as District Teacher of the Year for the 2022-2023 school year. Diana is married to Adam Kirk and resides in Conway, SC. She has two children, Harrison Stubblefield and Ellie Kirk.
Mrs. Kirk’s dedication to Dillon District Three began in 2010. She assisted with developing the Montessori program for Latta Elementary School, which was piloted in 2012. Currently, Mrs. Kirk teaches grades 1st through 3rd in a Lower Elementary Montessori classroom at Latta Elementary School.
When asked why she chose to become a teacher, Diana Kirk stated, “I always felt a special kinship with young children and possessed a desire to understand more about how they learn. I knew I could contribute to society by helping children develop and grow through my work as a public-school teacher.”
Being selected as District Teacher of the Year qualifies Diana Kirk as a participant in the selection of South Carolina Teacher of the Year.
The South Carolina Teacher of the Year Program is coordinated via the Division of Educator Quality & Leadership and is designed to honor those who are representative of the state’s many exceptional teachers.