My mom planned a family weekend to rent a mountain cabin in May, and as anytime we are near the mountains, Dawson Jordan and I checked an app to identify which rivers are nearby. A quick trip to a trout stream could result in a great morning of fishing before anything even gets started back at the cabin.
After debating between two options, Dawson and I chose Wilson Creek in NC and our step father, Joe Ellers, agreed to join us for the morning. I packed an extra fly rod and my duck hunting waders for Joe to use. 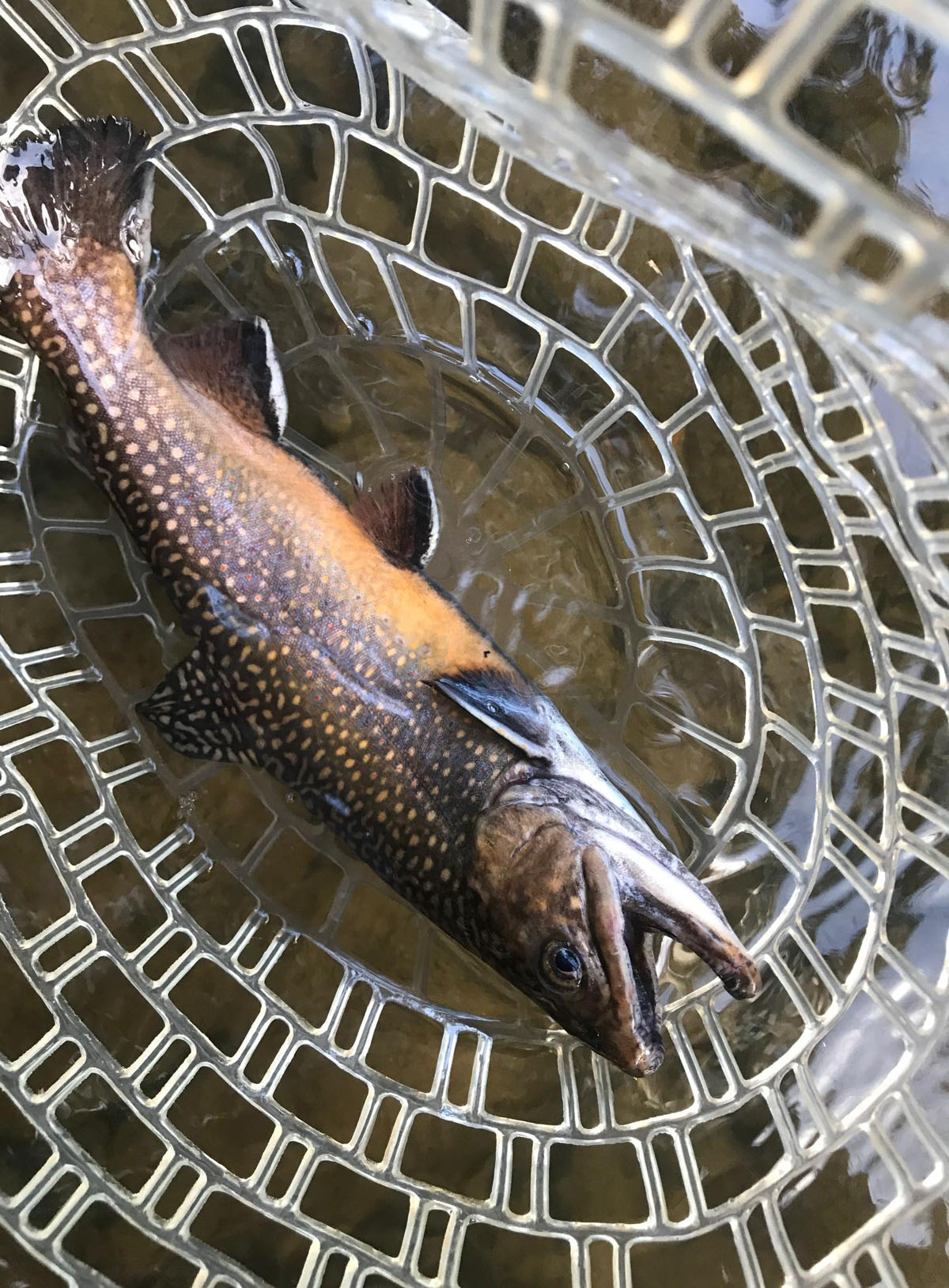 Our cabin was freezing cold on Saturday morning because we left the windows open. Dawson and I turned on the gas stove to heat the cabin while we got dressed for fishing so that Shannon and Giselle wouldn’t freeze while we were gone. We made coffee and heated breakfast burritos for our drive to the river.
Joe was stepping out of his cabin when we pulled up at 5 a.m., and he asked, “I hope you’ve got some coffee.” We did, of course, and we hit the road for the river. From an overlook, I could see fog lying over the Wilson Creek Gorge even in the dark.
Other cars were in the parking lot when we arrived and so Dawson left to stand at our favorite spot and hold it down while Joe and I got ready. It was 36 degrees when Joe and I joined Dawson on the riverbank to start fishing. We all had nymphs tied on our line which drift underwater representing insect larvae in the nymphal stage. I caught a brook and rainbow trout on my first two casts and Dawson caught a brook trout.
Joe had not had a bite yet and I traded my rod for his. I sat on a rock and clipped the line and began to tie on a prince nymph, occasionally glancing back at the river to see if I was missing any action. In doing so I saw the ripples where a trout rose to the surface and swallowed a fly.
“One lucky rise is not enough to change my plan,” I thought, but as I glanced back to the river, I saw trout rising and even leaping for flies.
“It’s a hatch!” I said, and with stiff cold hands, I tied on an Adams dry fly. I waded to the back of the run, just above the next rapid which is where the trout were feeding. I cast up stream and the fly deftly landed on the surface, dry and only balanced by a few hairs touching the water.
I stripped line as the current carried the fly closer. My eyes were trained on the fly, careful not to confuse it with one of the many real flies.
A trout rose to eat a fly beside mine and I didn’t flinch. The next trout to rise engulfed my fly. and I set the hook. The trout came alive and was quickly netted and released. It took both of my cold stiff hands to squeeze flotant from the bottle to dab some on the fly. The flotant is a water repellant that keeps the fly dry. I blew on the fly and fixed the hairs, then cast it again upstream.
Dawson and Joe were watching, trying to decide if they too should change or if the hatch would be short lived.
I caught a brown trout and a brook trout in the same way as before and in seconds, Dawson was beside me with an Adams fly tied on.
I traded fly rods with Joe and tied a Black Gnat onto this rod as most of the flies were black. Joe and I moved down stream to a long and shallow run. No trout were visible in the blurred and swift water but they were constantly rising to eat.
I laid my fly across the river where I knew a brown trout was waiting under a tree. The trout slurped my fly exactly where I thought it would be. I released the brown which was my largest fish of the day and moved down to fish in the still water just above the next rapid where I caught my last trout of the day.
Joe said that half of the time he couldn’t see his fly in the water but he knows that he missed two hits that he could see. He was mending the line correctly so I thought that his reaction must be too slow. We later found out that the tip of his hook was broken.
Dawson walked by on land and moved down the rapid from me. His rod was bent the next time I looked back at him and he raised his hand with five fingers. (4 of his 5 trout at that spot)
The action slowed down by 8:30 and more anglers descended to the river.
These fishermen were all fishing with nymphs and we didn’t see anyone hook a trout.
We moved upstream and down stream to find the best spots occupied.
We stopped at one more location where I sat on a rock to make a cast.
When I looked down, I saw a hatch of a thousand black flies gathering on top of the water and spreading across the stream as they were carried down river like a trout buffet. I sent my artificial fly out to join them but no fish rose to the feast.
Dawson, Joe, and I stripped the waders off and piled our gear in the trunk before riding back to the cabin. None of the fish were measured in size because none were greater than a foot in length.
We measured the greatness of our catch by the brilliant colors and the extraordinary way that they rose to the surface to eat our dry flies.
In the southeast, nymphing is the most common way to fly fish, but today, the fish behaved as if we were fishing in Montana.