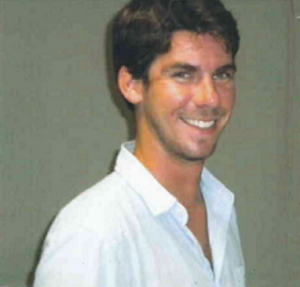 Colin was born on November 26, 1987 in Walterboro South Carolina to David and Dana Gasque.
Traveler and lover of adventures, Colin was looking for his way forward after the death of his brother, Cooper, in 2004.
At the age of 18, Colin set out on the first of his many adventures, this one to Puerto Rico.
He spent months driving an El Camino and surfing. He returned home with 13 cents in his pocket and the clothes on his back.
He later flew to Spain and sailed across the Atlantic Ocean. He even sailed into Cuba, before it was allowed, during a hurricane.
Colin went to Europe with a friend and traveled for several months.
He came home to South Carolina and embarked on a cross country trip across the US, working along the way at different land surveying companies. Colin spent several months in one of his favorite places, New York City.
When Colin accepted a job selling land surveying equipment, he relocated to San Diego, CA. During this adventure, he split his time between San Diego and Tijuana, Mexico. After surviving a week in a Tijuana jail, the result of a car accident (that Colin says was set up) he returned to Beaufort. He worked various jobs awaiting his next adventure.
Colin is survived by his parents, David and Dana Gasque, his daughter Emory, his brothers Cody (Brittany) and Conner, his niece Autumn, his maternal grandmother Peggy Cook, several aunts, uncles and cousins. He is predeceased by his brother Cooper Gasque, his paternal grandparents Marion and Dora Gasque, his uncle Tommy Gasque, his maternal grandfather Bobby Cook and his beloved dog and cross country travel companion Rocco.
The family will receive friends from 2:00 until 3:00 p.m., Thursday, November 10, 2022 at Copeland Funeral Service.
A graveside service will be held at 3:00 p.m., Thursday, November 10th at Beaufort Memorial Gardens. If inclement weather, the service will be held at the Chapel of Copeland Funeral Service
In lieu of flowers, the family requests donations be made in Colin’s name to the animal shelter or rescue of your choice.
Colin cherished his family, many tolerant friends, and most of all, his precious daughter.
Please share your thoughts and stories about Colin by visiting www.copelandfuneralservice.com Copeland Funeral Service is assisting the Gasque family with arrangements.