Beaver Dam held another tournament Wednesday afternoon, October 19th! It was a chilly afternoon but the fish were biting and the fishing began at 4:30 and ended at 6:30. Robert Tallon’s 3.6lb bass won the largest bass category. Robert had been on a years long drought but had been receiving coaching from his uncle, Jewell McLaurin, which apparently paid off! Close behind was Michael Owens and David Strickland. David McLaurin won the largest flat fish category with a 2 pound crappie. Mac Moody was a distant second. BP Gordon handled the weigh in and Burt Rogers and Ray Stephens prepared a delicious meal which everyone enjoyed. Club President Charlie Vance presented the winners with their prizes! (Contributed Photo) 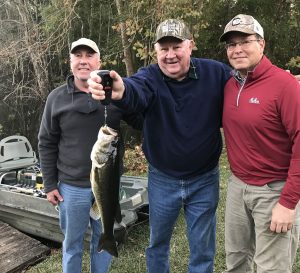