Superintendent of Education Molly Spearman came to Dillon District Three (Latta) to deliver a $3 million check. Read all about it in today’s issue of The Dillon Herald. (Photos by Johnnie Daniels/The Dillon Herald) 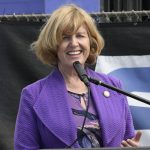 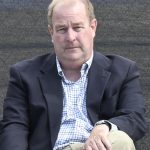 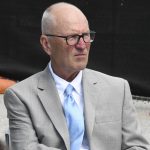 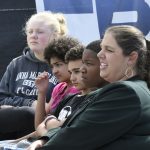 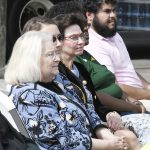 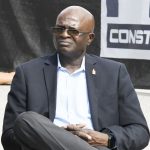 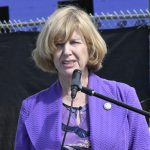 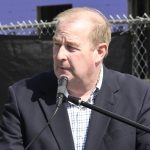 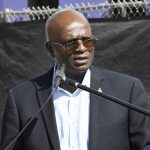 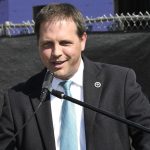 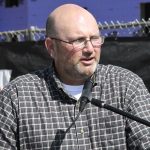 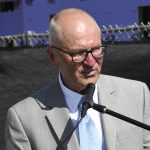 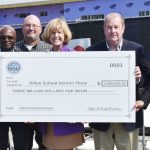 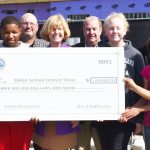 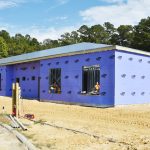 By Betsy Finklea
South Carolina Superintendent of Education Molly Spearman came to Dillon County on Wednesday with 18 million dollars for local schools and lots of praise for the Dillon County delegation including Rep. Jackie Hayes, Senator Kent Williams, and Rep. Lucas Atkinson.
Spearman, who had announced $3 million for Marlboro County earlier in the day, visited Dillon District Four first bringing with her a check for $15 million.
Dillon will use the $15 million in ESSER funds for the new elementary school.
Dillon District Four Superintendent Ray Rogers thanked Spearman for all she had done for the children in South Carolina. “The kids benefited from your vision and caring,” Rogers said.
Spearman said the last few years had been challenging ones, and it had been especially challenging for teachers and students. She thanked the principals in attendance—Shannon Berry, Jan Powers-Penuel, and Michael McRae—for all they have done to be caretakers for the teachers and students and encouraged them to take time for themselves. She also thanked the district office for their leadership. Spearman said that Dillon County had no better advocate in the House than Rep. Jackie Hayes. She also credited Senator Kent Williams for all that he does for the area. Spearman said we could have no better people representing the area than Rep. Hayes and Sen. Williams. She said this was a celebration of the announcement of the $15 million in ESSER funds announced earlier this year. She said these funds are coming to Dillon County at no cost to taxpayers.
Rep. Hayes said it’s about “trying to do what’s right”—it’s not about the D or the R. He praised Spearman for all she had done for the students of South Carolina.
Senator Kent Williams said Spearman “gets it.” She knows the challenges of rural South Carolina. She doesn’t deal with politics, but about what’s right. He pointed out that a tax mill in Dillon County is worth about $60,000 while one in Charleston is about $2 million. He said they want the same opportunities for children in rural South Carolina as the more affluent counties and didn’t want a hand out, but a hand up. He commended the citizens of Dillon County for approving the penny sales tax years ago that have brought the improvements since in recent years to the Dillon County schools.
After leaving Dillon District Four, Spearman visited Dillon District Three (Latta Schools) where Hayes and Williams were joined by Rep. Lucas Atkinson and Latta School officials. Some students were also part of the Latta celebration where Spearman brought a $3 million check. She explained to the students what this celebration was about and told them to study hard and take advantage of the opportunities presented to them. As the presentation was going on in Latta, the sounds of saws and building could be heard in the background as the addition to Latta High School was being constructed during the event.
Rep. Hayes said it was “always a good day when you bring the bacon to you home county.” He said Latta was a great school with great teachers, students, and a great community. Hayes said he was the students and community of Latta to have the best. He thanked Latta Superintendent George Liebenrood and Board Chair Kyle Berry and the other board members for their leadership. Hayes said this was a good starting point, and there is more to come.
Senator Williams said this is a great day for the Latta School District. He pointed to the kids in attendance and said this is our future and he wanted them to have the same opportunities as others. He again praised Spearman for all she has done to address the issues in the rural schools. Senator Williams said while $3 million might not sound like a lot, it means a lot to small districts like Latta.
Rep. Lucas Atkinson, who formerly represented Latta, thanked Rep. Hayes for helping him bring funds to Latta when needed. He said with Senator Williams and Rep. Hayes working together and the positions they have attained in the legislature, they would really be able to help Latta in the future.
Latta School Board Chairman Kyle Berry thanked Superintendent Spearman for all she had done for public education in this state. He noted that the Latta project is on budget. He noted many of the accomplishments that students had made in the Latta School District and said the district is a “diamond in the rough.” More pictures from these events will appear on www.thedillonherald.com.