The Dillon Herald, the oldest continuously operated business in Dillon County, was founded in 1894 by John P. Coffin of Florence.
At that time, the only other newspaper in what was then Marion County was The Marion Star, which originated in 1849 and had already lived two competitors.
As the northern section of Marion County developed and the Town of Dillon, after having been chartered in 1888, was its most populous settlement, the need for a newspaper became apparent and The Dillon Herald came into existence. The Herald’s first editors were named Churchill and Howard and shortly after its birth, Churchill purchased his partner’s interest.
Howard M. Ayers, an agent for the Charleston News and Courier acquired The Dillon Herald, a weekly newspaper, and in 1897, employed Arthur Buist Jordan, a native of Bamberg with daily newspaper experience, to come to Dillon to manage The Dillon Herald.
In 1898, Jordan acquired the newspaper, and it has been owned by the Jordan Family ever since.
According to Dr. Durward Stokes, author of The History of Dillon County, Jordan wrote shortly after his arrival in Dillon, “When the present owner came to take charge of the paper, he found small equipment in the back end of a frame building on the lot now occupied by Meares Grocery. In the front of the building were a food market, a pool room, and a beer privilege. The only liquid assets were a bag of sweet potatoes and two frying size chickens, which a conscience-stricken subscriber had brought in the morning.” Times have surely changed since then, but one thing that has remained the same is The Dillon Herald’s commitment to the community it serves.
Throughout the years, The Dillon Herald has weathered storms, fires, depressions, and other calamities, but it has never missed an issue or a payroll.

Who was A.B. Jordan? 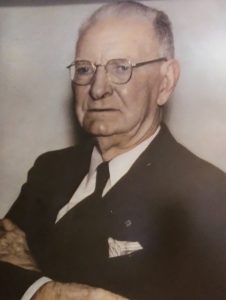 When A.B. Jordan came to Dillon in 1897, leading men in the upper end of Marion County were smarting over the defeat of their first effort to form a new county.
As editor of The Dillon Herald, which he bought a year later, he helped to keep alive the new county idea and was a key man in the long fight that finally ended in success in the forming of Dillon County in 1910.
Twice mayor of Dillon in the first decade of the century, he was a member of the Central Executive Committee that planned the strategy and carried the new county struggle to its ultimate success. All through the period of struggle he lent his writing talents to wooing supporters to the new county cause through his newspaper which gained and held high regard and deep respect.
When Mr. Jordan died in 1956 he still held the office Master in Equity for Dillon County, an office to which he was elected in the first Dillon County election and held continuously 46 years.
Born in Bamberg, S.C., on August 8, 1876, he was the son of Lawrence M. and Adeline Jordan. While attending school in Charleston at age 14 he wrote for The Charleston World. At 18 he joined the staff of The Augusta Chronicle and soon afterward transferred to The Atlanta Constitution. He was 21 when he came to Dillon to edit The Herald for H.M. Ayer, as the youngest editor in the state. He was married in 1901 to Hortense Hampton of Leaksville, N.C. He was always a community builder of the finest kind, active in all religious, civic, social and business circles, never a mere spectator. In addition to his other community service, he was also city clerk and treasurer of Dillon 1899-1901, president of the Dillon Chamber of Commerce, Chairman of Board of Trustees of the Dillon Public Schools, Chairman of the Democratic Party, Director in national Publishers’ Association, two terms on the Executive Committee of South Carolina Press Association in 1919 and re-elected in 1920, member of the Board of Control, S.C. Development Board, member of Committee on Markets of the same board, Vice- President and Director of First National Bank of Dillon, during World War I was chairman of Local Exemption Board for Dillon County and also chairman of Red Cross of Dillon County for the same period. He was also elected to the South Carolina Hall of Fame for newspapermen and listed in Who’s Who in South Carolina.
His career as a newspaperman and a citizen is a long record of service to his town, county, state and nation.
NOTE: Some of this information is taken from the September 1960 semi-centennial edition of The Dillon Herald.