By Betsy Finklea
Habitat for Humanity is coming to Dillon County.
Ricky Hardy, the executive director of Habitat for Humanity in Marion County, was the guest speaker at Latta Rotary recently where he shared the news. Hardy has held the position of director full time since February 2011. He is also a minister at Firefall Bible Church.
Hardy said they get numerous calls and have for years about people who need new homes or repair work in Dillon County, and their hands have been tied. He said when you hear the people’s stories and you can’t help them, it breaks your heart and make you want to cry.
Each Habitat for Humanity affiliate is restricted by Habitat for Humanity International to a certain geographical service area which is typically the county of the affiliate. 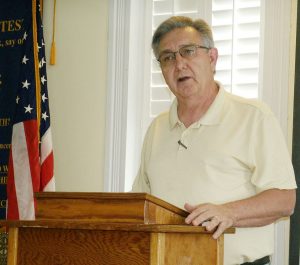 He said they had to file paperwork to get approval to come to Dillon County, and they have been approved. He said he didn’t know the exact date they were coming at the time of the meeting.
Hardy gave some background on the organization. Habitat for Humanity is a Christian ecumenical housing ministry. They seek to bring people of many faiths together to build people a simple, decent, affordable home. He said the homes are nothing fancy.
The goal of Habitat for Humanity is to eliminate poverty/substandard housing from the area in which they operate.
Habitat was founded in 1976 by Millard and Linda Fuller and Clarence Jordan, an ordained minister. Jordan started something called the Koinona Farm in Americus, Georgia. It was a place where the poor in the community could come and plant their crops, and they shared in their crops. The Fullers were multi-millionaires in their early 20s, who were having marital problems. They decided that money was the root of their marital problems and they started looking for places where they could give their money. They connected with Clarence Jordan and decided to combine the farming resources with putting in small homes on these farms for people to live in. From there, Habitat for Humanity was born.
Since 1976, 800,000 homes have been built and over four million people have been served. Habitat for Humanity is now an international ministry.
The Marion County affiliate was founded back in 1994. A group of concerned citizens in Marion County wanted to do something about the housing conditions, and Habitat took root here getting chartered on October 31, 1994. It takes people with a concern for other people, Hardy said.
Hardy said a few years ago, a man from Dillon County, who now lived elsewhere, offered Habitat 20 acres to build homes in Dillon County. Unfortunately, he had to decline the offer, but he said that spurred the push to bring Habitat to Dillon County.
Since their founding, the Marion County affiliate has built 47 homes and remodeled five homes. They are working on their 49th home in Mullins.
“It’s a great work that we do,” said Hardy, “and we look forward to bringing that to Dillon County.”
Each Habitat homeowner family (varies by affiliate) has to put in “sweat equity” into their home or the home of another Habitat homeowner. “We don’t give these homes away,” said Hardy. For the Marion County affiliate, each family is required to do 250 hours of “sweat equity.” They can get credit through various means.
Funding for Habitat homes is provided by Collegiate Challenge. Collegiate Challenge is a youth program sponsored by Habitat for Humanity International. The program started in 1996. College students give up their breaks to work on Habitat homes. and pay an affiliate fee to come do the work. The affiliate houses the students fir a week in area churches and contacts businesses, organizations, individuals, etc. to provide their meals. Hardy said not every affiliate does this. “It is a big part of what we do,” he said. Villanova University has been coming to Marion County twice a year since 1996. He said anything they can get free keeps the cost of the home down for that family.
Hardy said once the homes are complete, they sell the homes. They do not give the homes away. Hardy said this is a big misconception about Habitat for Humanity. They sell the homes with zero percent interest with typically a 20-year mortgage. They sell the homes at cost. They have to get the homes appraised. They have a silent second mortgage for the difference between the cost of the home and the appraisal. It depreciates over the length of the mortgage.
The benefits of having a local Habitat for Humanity affiliate is building relationships between people and giving a sense of community. “It builds unity in the body of Jesus Christ locally and globally. “It’s about Kingdom work,” said Hardy. “It’s about building up and encouraging people.”
There are 36 Habitat for Humanity affiliates in South Carolina. They have an impact of about $20 million each year on the South Carolina economy. Over 2,500 Habitat for Humanity homes have been built in South Carolina since 1995. More than 3,000 South Carolina families have benefitted from new homes and critical home repairs. Every Habitat for Humanity family has an income of 30-80 percent of the area median income.
Children of homeowners are 35 percent more likely to graduate from high school if they have a safe and secure home. They are 116 percent more likely to graduate from college. They are 20 percent less likely to become teenage mothers. They have a nine percent higher math score, and a seven percent higher reading score. They have fewer behavioral problems. They are 50 percent m ore likely to own a home within 10 years of leaving their parents home. They are 15 percent more likely to vote.
Hardy listed some ways people can help and some of the needs they have as they come to Dillon County. He said they will need to build relationships, donation of land, and a local office. “It’s going to be a growth process,” said Hardy.
“I think Habitat is a good thing,” said Hardy. “I see it make a difference in the lives of people.”
“People are looking for hope,” said Hardy, “and Habitat provides hope.”