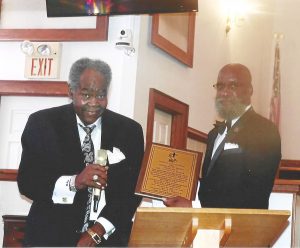 Deacon Johnny Gordon McRae was chosen 2022 Father of Year at Manning Baptist church recently and was awarded a plaque.
Deacon McRae was reared in Dillon and grew up in Manning Baptist Church. As a youth he was active in several ministries.
He attended the schools of Dillon County and graduated from Gordon High School in 1961.
Immediately after graduation, he moved to Stamford, CT in pursuit of a better life which he realized by becoming a successful real estate owner and using his acumen for business to become the owner of a restaurant, Johnny’s Drive In. The Drive In became well-known for its Chili Dogs and Shrimp Baskets.
Because of his Christian training at Manning, when Johnny became a resident of Stamford, CT he joined Union Baptist Church where he became a deacon and served as Chairman of the Deacon Board for twenty-five years.
In 1976, Johnny Gordon moved his family back to Dillon, but their stay was short-lived. Deacon McRae could not find employment of his choice, as a result, he and his family moved back to Stamford where he was hired by Metro North Railroad in New York as a train conductor, a position he held until his retirement in 1998.
Johnny Gordon and his family relocated to Dillon in 1998. Here in Dillon, he has continued to pursue his love of real estate and display his passion for exotic cars. He has acquired both residential and commercial properties. He built a mini mall in the New Town Community.
He served as a member of the Dillon County Development Board 1999 to 2006 and was instrumental in the planning to bring Harbor Freight to Dillon.
Johnny Gordon McRae is married to the former Vermell McKenzie, his wife of sixty years, and they are the parents of five children: Regina, Johnny Gordon, Jr. of (Felicia), Eric and Robin all of Dillon, and Lanell (Fred) Perry of Clinton, MD. The McRaes are the grandparents of nine children, the great grands of seven, and the great great grands of one.
Deacon McRae’s motto is, “May the work I’ve done speak for me,” and his favorite scripture is the 23rd Psalm.