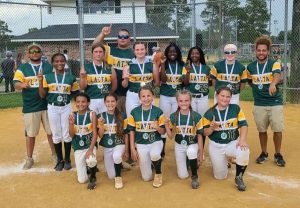 The Latta 12u All-Stars lost just one game during their regular season and were undefeated throughout the SCAP District Tournament which began on Thursday, June 9th, with a nail-biting first game against Lake View. Ultimately Latta pulled off a 14-13 win, advancing them to game two versus Dillon which resulted in a 13-0 shutout, keeping Latta’s streak alive. On Saturday, Latta continued to advance in the winner’s bracket with another shutout, beating Marion 10-0. The championship game was a rematch against Lake View. Latta was victorious yet again with a 6-2 victory yielding them District Champs.
The South Carolina Athletic Program 12u Softball State Tournament will be in North Augusta, South Carolina, June 23rd through 26th. Latta will be representing the Eastern District.
The team will be having various fundraisers leading up to state.
The games will also be streamed live through an app. If you’re interested in supporting this talented group of young ladies or would like to watch online, please reach out to head coach, Chris Richardson at 843-319-5676.