An investigation into a home invasion that resulted in murder has led to multiple felony charges against a suspect from South Carolina. Jason Tyvon McRae, 30, of Dillon, South Carolina is wanted in relation to the death of Shawn T. Campbell, 20, of Fairmont. McRae is charged with first degree murder, first degree burglary, robbery with a dangerous weapon, discharging firearm within enclosure to incite fear, possession of firearm by felon and felony conspiracy. 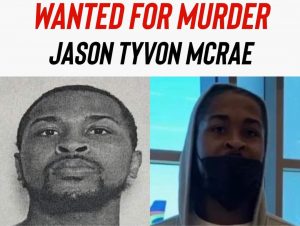 On Monday, May 23, 2022 at approximately 12:45 am, Robeson County Sheriff’s Office deputies were dispatched to 9310 Hwy 130 By-Pass, Fairmont, NC in reference to an individual shot. Upon the arrival of the deputies, Campbell was found inside of the residence deceased.

“Under our system of justice, every person is presumed to be innocent unless proven guilty in a court of law. The information contained in this post is not intended to be an expression of opinion regarding guilt. The views and opinions expressed by private citizens who may comment on this post are not adopted by and do not reflect the official policy or position of this law enforcement agency.”

NOTE: The Sheriff’s Office does not issue or determine bond amounts. This is done through a judicial official, such as a judge or magistrate, as per N.C. General Statute 15A-532. Many factors are considered when determining bond amounts.