What does a standout in Francis Marion University’s Class of 2022 have in common with some of the most notable figures in modern history?
They’re family. 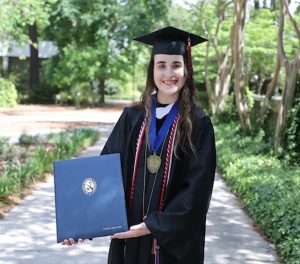 Elizabeth Henry of Latta, who received her diploma at FMU’s commencement on Saturday, is a direct descendant of American Founding Father Patrick Henry. Yes, Patrick Henry of “Give me liberty or give me death” fame. Patrick Henry’s family tree is a virtual “who’s who” of historical figures. From Sir Winston Churchill to Billie Eilish, Helen Keller, Bing Crosby, Marilyn Monroe, Walt Disney, and Gen. George S. Patton, just to name a few.
Elizabeth’s link to Patrick Henry is something others are more impressed with than she is; however, history is a major part of her present and future.
It was her major at FMU, with minors in anthropology and geography. Elizabeth plans to take a year off and travel to Australia and New Zealand with her father, Benton Henry (FMU Class of 1988). Then she’ll continue her history studies in graduate school.
Elizabeth’s current focus: German youth resistance to Nazism during World War II. Her honors thesis argued that youth resistance proved Hitler’s re-education and Nazification policies weren’t all that successful.
“Youth resistance was often overlooked, because they weren’t this huge organization that had united efforts and did these big, grandiose acts, like plotting to assassinate Hitler,” she said.
“They were smaller. They printed leaflets. They wrote slogans. They held parties and had critical discussions.”
They filled walls with graffiti, risked arrest and even execution.
For Elizabeth, history was always one of her favorite subjects.
“To me, it’s all stories,” she said. “That’s history.”
Through high school, she was well-educated on U.S. history, but was grateful for the opportunity to explore broader historical vistas at FMU.
“I was super excited about entering college, because I knew there would be a greater variety of history courses to take,” Elizabeth said.
Three courses, including one on modern Germany, were taught by Dr. Alena Eskridge-Kosmach.
“I was impressed from the very beginning with her work ethic, how she was listening to the lectures, how she was responding,” Eskridge-Kosmach said. “I was impressed with her intellectual curiosity, her broad-mindedness, her ability to work with me as her teacher and her ability to do the work by herself to look for the materials to look for new angles.”
Elizabeth was looking forward to studying abroad, perhaps in Ireland, last fall, but COVID scrapped those plans. While she wants to study internationally as she pursues a master’s degree,
Elizabeth has already seen much of the world. In addition to last year’s travel, she has been to China, Quebec and Montreal, France, Switzerland, Germany, Austria and Liechtenstein.
In China, she visited Shanghai and Beijing, from which she saw a portion of the Great Wall, and during a trip to the countryside, she saw the Terracotta Warriors.
“With my interest in archaeology, this was really cool to see,” she said. “It’s like a football stadium-size excavation pit.”
In Germany, Elizabeth visited Munich and nearby Dachau, the Nazi’s first concentration camp.
“It’s just one of those things that you have to see for yourself, and it helps you understand the magnitude of something that’s happened,” she said.
Elizabeth will be an intern this summer with the Marion County Museum and is looking forward to helping with an oral history project on Green Book sites in South Carolina, particularly Marion and Mullins.
She also plans to help Dr. Christopher Barton, an FMU assistant professor of archaeology, with some archaeological work at Jamestown, near Mars Bluff and not far from the FMU campus.
“It’s a plot of land that was historically owned by a black family shortly after the Civil War and has remained in the family ever since,” Elizabeth said.
“There are few original foundations of roads and houses. One of the owners, Terry James, has worked with us a long time as part of the broader oral history project that we have here on campus studying slavery. Connecting this campus to history is very important.”
The straight-A student plans to get her doctorate after she decides between history and anthropology.

First she will pursue her master’s in historic preservation. One school she is considering is Appalachian State.
“I’m interested in the physical preservations of artifacts, landmarks, buildings and documents,” she said.
“I’ve looked into the possibility of becoming an archivist, because that’s actually a blooming field now with digitization. Records are increasingly deteriorating, and it’s becoming too tedious to keep.”
Elizabeth works part time at Palmetto Peddlers in Florence.
“I still tie in history,” she said with a grin.
“It’s an antiques mall.”