By Betsy Finklea
The Third Annual Economic Development Summit was held on Friday, April 29th, at the South of the Border Convention Center.
Several speakers updated the audience on various issues. 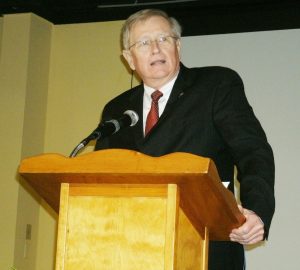 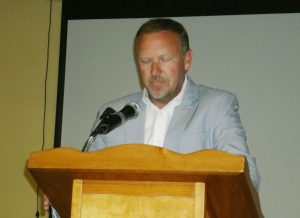 The invocation was given by Chief Deputy Jamie Hamilton. 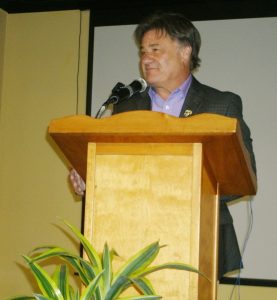 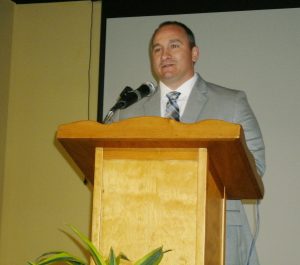 Don Strickland, Executive Director of the Pee Dee Regional Transportation Authority (PDRTA), said PDRTA is happy to bring bus service back to people who have not had it in a long time. PDRTA serves six counties in the Pee Dee Region including Dillon county. They are the largest RTA by land mass in the State of South Carolina and were the first RTA formed in South Carolina. PDRTA is 75 percent federally and state funded and 25 percent funded locally.
In Dillon County, PDRTA provides DCAT (Dillon County Area Transportation) service in the City of Dillon, Latta, Lake View, Little Rock, and Hamer.
Nearly 45 percent of the people in the total Pee Dee service area who ride are going to work. PDRTA made 300,000 trips in the area last year.
Strickland said PDRTA service takes a local commitment, and many in Dillon County are partners. In addition to the existing service, Strickland said PDRTA is planning park and ride service in the next couple of years.
Strickland said at times he rides as a passenger on the bus and speaks with the riders. Many are going to work, to the doctor, to the pharmacy, or to the grocery store, trips that once cost these riders $20-$30 when they were charged by family members or friends for these trips. Rides are fare-free in Dillon County. Strickland said he is looking forward to continued expansion in Dillon County. 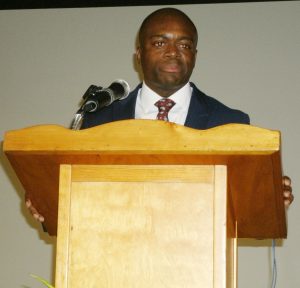 Michael D. Jackson, manager of Federal and Government Strategy for the South Carolina Ports Authority, was the next to speak. He said the South Carolina Ports Authority is successful, but he didn’t think it would be the success it is without the Dillon Inland Port. He said they have received a record volume of containers in the past 12 months and a huge part of this is the Dillon Inland Port. 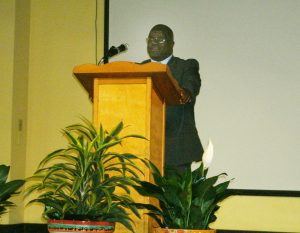 Michael Elmore, the Dillon Inland Port manager, said he was glad to be here in Dillon and the Port was very successful. He said tours can be arranged by going on the S.C. Ports Authority website. He said he hoped they would continue to be a success for years to come. 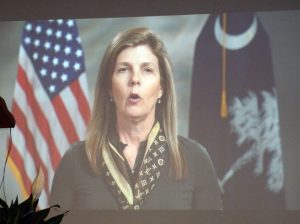 After these speakers, dinner was served. The program continued after dinner with a video featuring South Carolina Lieutenant Governor Pamela Evette. She said the South Carolina economy is booming with an unemployment rate of 3.5 percent. 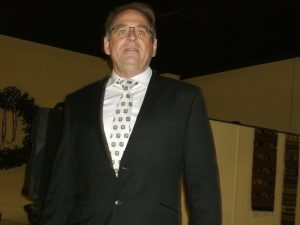 Dr. Kyle Wagner spoke about Northeastern Technical College (NETC). He said the state educational attainment rate was 41 percent, and Dillon County’s educational attainment rate was 40 percent. Wagner said there was an increase in students in Dillon County who earned a workforce certificate or associate’s degree compared to previous years.
Wagner said they are at maximum capacity at the Dillon campus and that they must have facilities. There has been a 365 percent increase in dual enrollment from 2016-2020. They have doing transfer degrees, but they are shifting from a transfer college. They have also been teaching classes in Harbor Freight and Perdue. 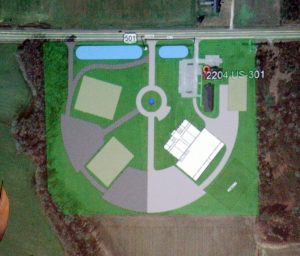 Wagner spoke about the economic transformation that education can bring. He said that the leaders and community must get around the table and figure out how to get a campus in Dillon.
Wagner showed a drawing of a proposed campus. For Dillon. He believes enrollment will increase to 2,000 students if they get a new campus. He said there is a market here for this. “We need space, and we need it bad,” Wagner said. He said they want to help companies move here and be productive. 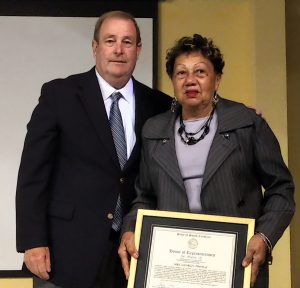 Rep. Jackie Hayes was the next to speak, but made two presentations first. He presented a plaque for Dillon County Councilman Harold Moody, who was unable to attend, for his many distinguished years of service to Dillon County. This was accepted on Moody’s behalf by Dillon County Council Chairman T.F. “Buzzy” Finklea, Jr. Hayes presented a South Carolina House Resolution to Mrs. Georgia Thomas for her contributions to the community.
Hayes said he was very fortunate to serve on the House Ways and Means committee. He noted that in Dillon County in 2010, unemployment was 16 percent. Right before the pandemic, it was at 2.5 percent. It is now at 4.3 percent. “If you need a job in Dillon County, you can get one because of forward-thinking,” Hayes said.
Hayes said it is not about political differences. It is about connecting the dots and working with different people to make things happen.
Hayes noted that Dillon County spent $3 million of their money for the inland port to come here. “It takes money to make money,” said Hayes. He said he appreciated the opportunity to help make the county grow and thanked the audience for the opportunity to serve in the statehouse. 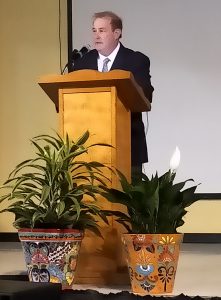 Congressman Tom Rice was the last to speak. Rice said as a congressman he has worked to make life better for those who live on the Grand Strand and the Pee Dee. He said that unemployment was 14.3 percent when he took office and is now very low.. “People forget how bad it was,” said Rice. He said the poverty rate in this area has dropped by 29 percent while household income is up by 35 percent. Rice said he has worked to give everybody a real opportunity, a fair shot, at the American Dream, but his job was not done yet. He said the number one problem that industries are facing is that they can’t get people to work. He said if you depend on the government to take care of you, then you will always live in poverty. Rice said he helped draft tax reform and negotiate the new NAFTA. He is proud of what he has done, but said there is a long way to go. 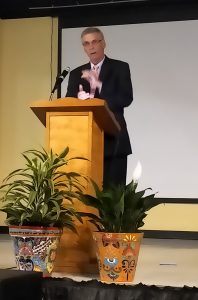 After his remarks, Rodney Berry gave some brief parting remarks and adjourned the summit. More photos appear on The Dillon Herald’s page on Facebook®.