The Latta Rotary Club recently held a dinner and fundraising drive to provide a local relief effort to support Ukrainian refugees.
At this time, the BBC estimates that more than 4 million Ukrainians refugees have fled the Russian onslaught of their country. In context, South Carolina has a population of about 5.2 million people.
The carnage of Ukraine is almost unbelievable. Not since WWII has the world seen this much devastation: Hospitals, schools, suburbs, apartment buildings, churches; nothing is off limits to the Russians. The people who fled need support. Many have no family or contacts outside of Ukraine and are dependent on the good hearts of people who will make sacrifices for them. The volume of refugees is just too much for Poland and other NATO countries to absorb without help. There are, of course, many opportunities to support the refugees, many Christian denominations and churches have missionaries and other opportunities for support. What they offered is an opportunity for our Pee Dee communities to provide gifts from our region. Rotary International is no stranger to major relief efforts. In 1979 there were about 350,000 cases of polio worldwide. Today, there are about 20 cases. The statistical projection is that 16 million (3X the total population of South Carolina) people who would have suffered from this deadly disease did not because of the efforts of many people working together for the purpose of serving others. Rotarians donated 2.1 billion dollars and other support from nations, corporations and individuals, in over 122 countries that have amounted to over $10 billion, for the world eradication of polio. As of today, only two nations in the world (Afghanistan and Pakistan) have refused vaccinations. World cases have been reduced by 99.9%.
Think of the details, the logistics, the coordination with countries of such diverse peoples and political systems; all the nations on earth (with two exceptions) have now been vaccinated for polio! While this is major it is only one of many ongoing humanitarian efforts of Rotary.
All funds were forwarded to the Rotary International Ukrainian Relief Fund. 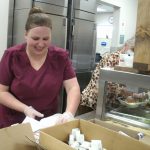 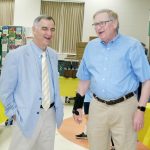 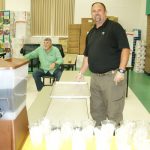 Robert Norton and in the background, Rocky Brunson 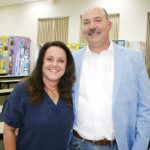 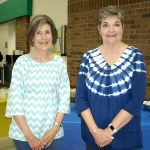 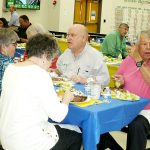 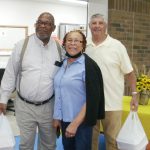 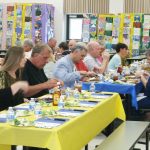