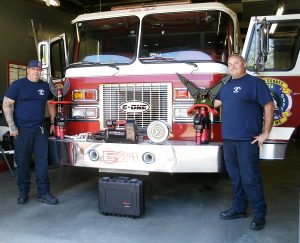 By Betsy Finklea
Christmas came early to the Dillon County Station Two Fire Department on Wednesday, April 20th when they received a very important package thanks to the Leary Firefighters Foundation.
Dillon County Station Two (Latta) will now be able to better serve citizens in an an emergency thanks to some rescue tools they were able to get through a grant from the Leary Firefighters Foundation. Among the tools they received were a TNT Storm Surge spreader, cutters, and ram.
“We are deeply thankful to the Leary Firefighters Foundation,” said Chief Andy Britt. “Without their assistance, we would not be able to get these much-needed tools.”
Britt said these tools will be used to assist wreck victims who need to be extricated. Assistant Chief Brad Smith added that it would also be helpful in industrial and manufacturing accidents or other incidents where extrication is needed.
Britt said this will greatly enhance extrication efforts on the south end of the county.
This equipment will help us save lives by being able to extricate victims quickly and efficiently without having to wait for assistance from other departments, Britt explained.
The Leary Firefighters Foundation is dedicated to filling the gaps between the limits of government funding and the vital need of fire departments.