The City of Dillon Police Department is seeking the public’s help to locate Cruz Emmanuel Harley, who is a suspect in a recent murder, according to Chief David Lane. 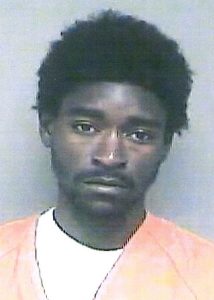 Harley is wanted on charges of murder, possession of a weapon during the commission of a violent crime, and felon in a possession of a firearm in the death of Brian Keith Ford at the 24-Hour Hot Spot on Tuesday, April 26th.
Harley has an extensive criminal record and should be considered armed and dangerous.
Another suspect, Azaya Peterson, was arrested and charged with accessory after the fact of murder on Wednesday, April 27th in the case.
If you have any information about this case, please call the City of Dillon Police Department at 843-774-0051, 9-1-1, or the City of Dillon Police Anonymous Tip Line at 843-774-0051 ext. 800.