Shannon Jordan and I went to the upstate for a Clemson football game in the late season and enjoyed watching the Tigers win. We stayed in Anderson that night and woke early on Sunday morning to go fly-fishing. We made coffee for the ride and the Blue Ridge Mountains were soon in sight. We reached the Chauga River and stepped out of the car to gear up. The temperature was 36 degrees Fahrenheit, and the plants were all frosted. Shannon and I were dressed in layers, and we encapsulated our outfits with our waders. Shannon had her own set of fly-fishing waders this time which were a major improvement from last time when she wore duck hunting waders. Fly fishing requires hiking and scrambling rocks, two categories which heavy duck boots perform poorly. 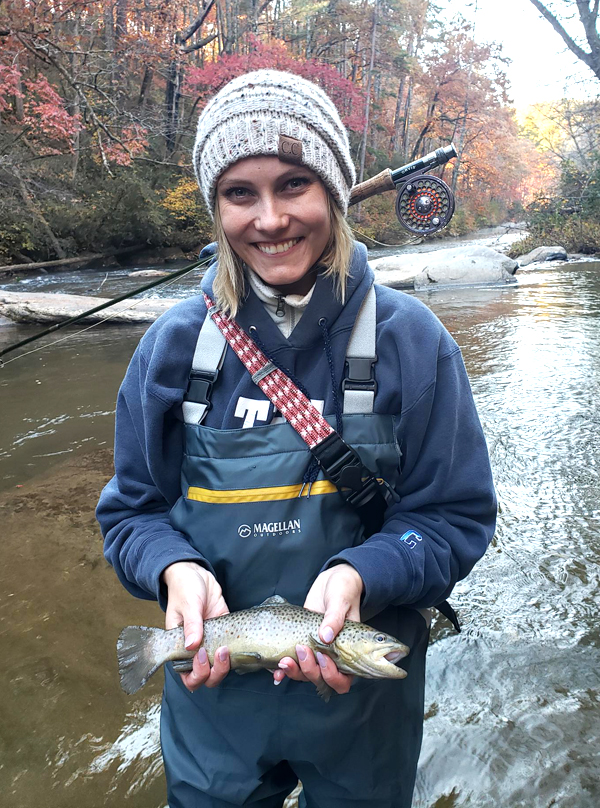 Shannon and I only had one fly rod, and we took turns fishing as we moved between spots. I started fishing and cast prince nymphs and stoneflies into the current. I watched carefully while the current carried the nymph and a trout rose to eat it. I set the hook and could feel the trout’s vibrations all through the rod. I dipped my net in the rushing water and guided the rainbow trout inside. It was Shannon’s turn now and she repeated the roll cast and drift carefully to make sure it was perfect. Sometimes the stonefly would bump into a rock, and she would set the hook because a rock feels exactly like a fish bite. She pulled out a little line to make farther casts and roll cast back across the current. The current carried the stonefly and Shannon felt a bump.
When she set the hook, a brown trout rose into view shaking its head side to side. I couldn’t believe it. From the cast to the hookset, Shannon was perfect.
Now we had to be careful and land her trout in the net. When Shannon fought the fish enough, it turned on its side and I scooped the net underneath it. We took some pictures and released her trout to fight another day.
We moved upriver looking for rapids, eddies, and deep runs of water where trout may be hiding. I stepped into the water and waded into casting range of the current and started fishing. I soon had a rainbow trout leaping and turned around to tell Shannon and she had just fallen into the river. Her arm was soaked and when she stood up, the cold mountain water ran down her hoodie into her waders. She was still able to fish for now, but the cold would soon be setting in. Shannon managed to catch another trout, a rainbow this time, but her arm was getting cold and shivering. We took a break from fishing and sat on a log to eat our clementine oranges and then I went back to fishing. 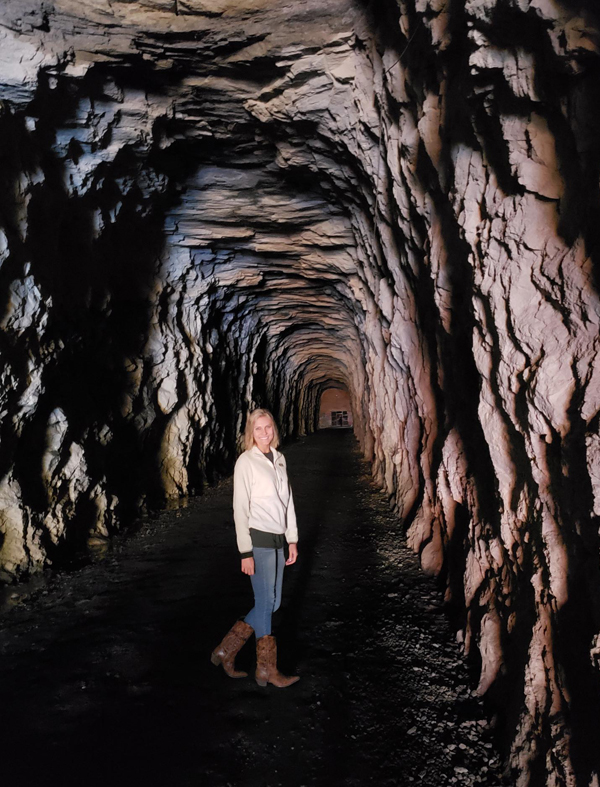 I leaned against rocks in the middle of the river and used them to hide me while I fished. The fall leaves littered the water and were getting caught on my line but that still didn’t take my appreciation for the beautiful fall leaves in the trees. I noticed a pair of trout dancing in a mating ritual where they swim parallel and then in a circle together like a dance. They break off the circle, swim upstream, and repeat. I made no effort to catch them because they were occupied with each other, and I had been ignored every time I approached fish with this behavior. I always enjoy seeing the dance.
Shannon and I had caught six rainbow trout and three brown trout in the morning and decided to hike back to the car. We changed out of our waders and started the ride home, stopping in Walhalla, SC to explore the Stumphouse Tunnel along the way. My favorite part of the day was when Shannon said that she wished we had two fly rods so we could fish at the same time. Shannon, knowing the basics, was ready to approach a section of the river on her own, and a fly rod would be wrapped under the tree for her on Christmas morning.