Congaree National Park is a National Park in South Carolina and I was eager to visit and see why this swamp earned the title of a National Park. The Congaree River had already become a special place to me through our endeavors of the spring striper run, but I wanted to go with Earl Dutton so he could share the history and significance of what we would be paddling through. 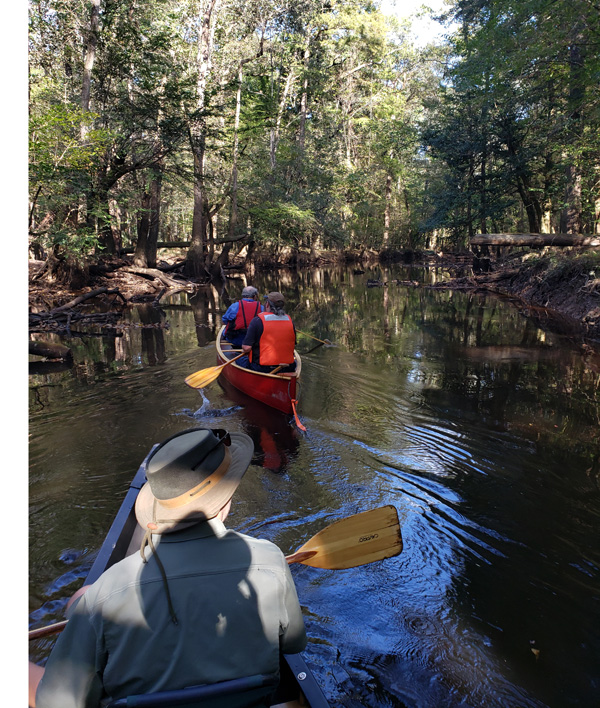 Duncan McLaurin joined my canoe and Robert joined Earl in his canoe. Earl and Robert camped out Friday night and we met at their camp around 9 am on Saturday. Duncan and I arrived to a lit fire with breakfast cooking. The tent was pitched with cots inside and a bedside table. Earl and Robert were cooking grits, bacon, eggs, and coffee and it was evident that they can be as comfortable in the woods as at home. I started some coals and used them to cook buttermilk biscuits in my cast iron Dutch Oven. We enjoyed our breakfast and then mobilized for the river.
We carried our canoes down a trail to Cedar Creek, a tributary of the Congaree River that leads through the Congaree National Park. Duncan stood guard with the canoes, and we moved the cars downstream to the finish line. I joked that Duncan should make sure he added freon to the canoe’s A/C and Earl added for him to check the oil as well.
We returned to Duncan at Cedar Creek and shoved off down the stream. Cedar Creek is a narrow river consisting of sharp turns at close intervals. The sandy bottom and black water closely resembled the Little Pee Dee River. The main difference between the Congaree National Park and our local Little Pee Dee River is the forest. The forest of bald cypress, red maple, and pine continued endlessly on either side of the creek and the only sounds were flowing water and wind in the trees. This was a big difference from the heavily logged Little Pee Dee River.
The wildlife was active that day and we encountered wood ducks, a heron, and wild hogs. A kayaker paddling upstream warned us that a water moccasin was resting on the next tree. Duncan and I paddled towards it, against Duncan’s will, and identified it as a harmless Brown Water Snake. I removed my hat and held it in the snake’s face to distract him while I grabbed his head, however, the hat was too intimidating, and the snake jumped into the water before I had the chance to make the catch.
The wind was so hard that nuts were being blown out of the bald cypress trees and hitting the water. Some hit us on the head, and we paddled under a bridge where Earl chose to break for lunch. We had sandwiches and then were back under way. The wind was still blowing, and we heard a great tree fall in the distance. It moaned, scraping other trees, then crashed onto the ground.
Cedar Creek offered more obstacles as we moved along our route. Logs lay across the entire river, and we had to pass over many of them. While crossing one log, Duncan and I slid my canoe over the tree and into the water on the other side. Earl climbed over it, and stepped into my canoe while his canoe was moved across the tree. Earl’s canoe mate, Robert, pushed his canoe over the tree and back into the water. Robert attempted to board the canoe and it slipped out from under him, dunking Robert head first into the river. Duncan and I salvaged the wreck and bailed out the water, then both canoes were underway again. We came across a pair of otters aggressively hissing and swimming close to the boat. They were sitting straight up in the water looking at us and we thought that we may be near a nest.
We reached the boat ramp and trailered the canoes before sunset and then drove back to camp. Duncan and I had kitchen duty for dinner and meatloaf was on the menu. We started making our mixture right away and baked the meatloaf in my dutch oven on coals. We sat around the fire enjoying a hearty meatloaf after a long day of canoeing.
The Congaree National Park offers more than what we had time to do. The Visitor’s Center was closed at the time but has great exhibits of plants, animals, and natural history. Don’t let the absence of a boat deter you from planning a trip either. There are miles of walking trails and a boardwalk that makes a 2.5 mile loop through the parks core. We had a great first trip to the park and hope to come again in the near future.