By Judge James E. Lockemy
A Memorial Day service presented by the Dillon County Veterans Of The Year organization will be held on Veterans Square in front of the City-County Complex on Monday, May 31, at 11 a.m.
This year the guest speaker will be retired Navy BMCM Ray Brown.
Brown served heroically in Vietnam where he manned a river boat that engaged the enemy on several occasions. In the course of fighting for our country, he received wounds and was awarded the Purple Heart along with other medals for his service. He later served during Desert Storm and was deployed to Saudi Arabia.
Asked about his 32 years of service and his awards, Brown stated that he most cherished the Purple Heart.
On Monday, Brown will emphasize the sacrifices made by so many men and women in uniform for the freedoms we enjoy in America. He vividly remembers those who gave the ultimate sacrifice fighting next to him in Vietnam.
This year’s Memorial Day Service will also honor the service of a Distinguished Deceased Dillon County Veteran. This year’s recognition will go to Navy Commander Phil Brown. He not only fought in both the Atlantic and Pacific Theater during World War II, but his crew engaged in hand to hand combat with the sailors of a German Submarine on the high seas in 1943. Thursday’s issue of The Dillon Herald will highlight more of this outstanding Veteran and Dillon County Citizen’s service to his nation and community.
A special part of the service will be the reading of the names of all Dillon County Veterans who have passed away since our las Memorial Day Service.
A lineup for this important service is printed below. Everyone is invited to attend to honor our Veterans but especially those who gave their lives for our country. 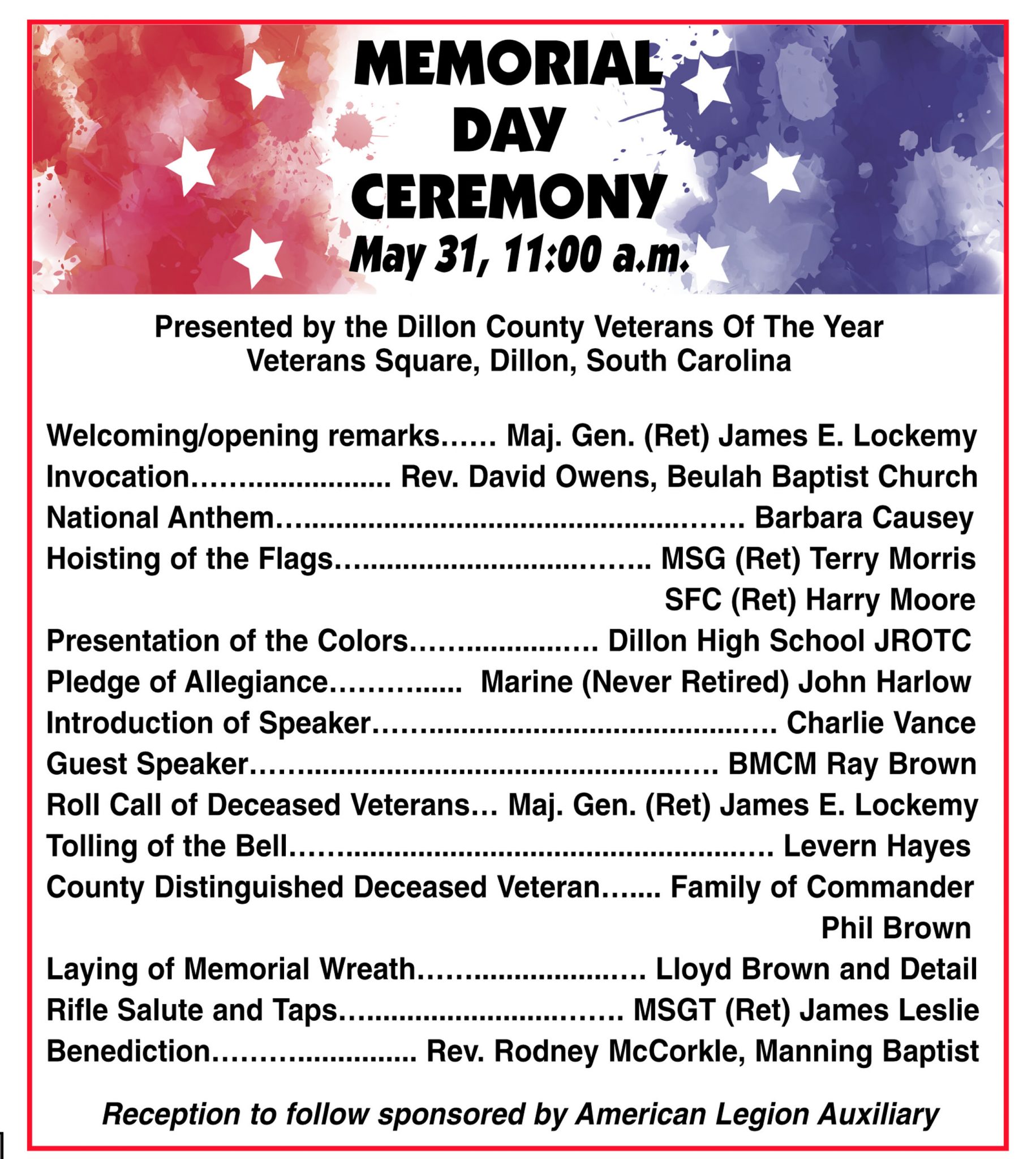 ***
By James E. Lockemy
Philip B. Brown, longtime community leader, who passed away on May 29, 2002, will be recognized almost exactly 19 years later on Memorial Day for his actions in World War II as the Distinguished Deceased Dillon County Veteran.
Most people knew Phil Brown as a partner in Brown-Lucius Wood Preserving Company or as owner of the local radio station. He also was very much involved in community service from the Mental Health Association, Legislator, establisher of Pee Dee State Park, bank board member, chair of the school board, and South Carolina highway commissioner. In those endeavors, he devoted countless time and effort for the betterment of Dillon County. Few knew though of his amazing acts of bravery and courage while serving in the United States Navy during World War II.
Commander Brown, a United States Naval Academy graduate, saw action in both the Atlantic and Pacific theater. He ended the was as the Captain of the Destroyer, the USS J. Fred Talbert. His leadership helped earn the ship many citations including one from the president of the United States. He also received several military awards including the Legion of Merit and a special citation from the Russian government for heroicism.
It was as the executive officer aboard The Destroyer U.S.S. Borie in 1943, however, that his actions were the subject of many glorious reviews and even articles in Life magazine, Military History Quarterly, as well as other publications.
While acting as an escort for a navy convoy, The Borie came in contact with German submarine U-405. Although several depth charges failed to sink the sub, they were injurious enough to cause it to rise to the surface. When that occurred the ships were so close to each other, The Borie decided to ram the enemy ship. With German crew and American crew practically face to face, a hand to hand and gun to gun battle broke out with Executive Officer Brown leading the way firing a machine gun. Brown and his crew got the best of the Germans and those that were not killed abandoned ship as it began to sink. An attempt was made to rescue the German sailors but another sub fired a torpedo at The Borie, causing it to cut into the German rafts to avoid being hit. No one knows what happened to the hapless German crew after the maneuver as The Borie then had to head for the convoy. The battle had caused extensive damage to the ship and it was taking on water. Before it got to safety the ship began to sink costing several brave American lives before the survivors, forced to abandon ship and man the life rafts, were rescued by an American vessel.
Commander Brown survived that action and many others and finished the war with an outstanding record of bravery and service. He retired from the Navy in 1954 and came to Dillon where, as noted above, he made significant contributions to our country.
The Dillon County Veterans of the Year organization began recognizing a deceased veteran from our county two years ago. The first recipient was the late Charles Lee because of his distinguished career on active duty and in the National Guard. The COVID-19 pandemic prevented the recognition of someone last year. Therefore, Commander Phil Brown will be only the second deceased veteran to be recognized by this special award.
Members of Commander Brown’s family will be present and receive the award in his honor at Memorial Day services on Monday, May 31, at 11 a.m.
The public is invited to come to this service and hear more about this brave hero of World War II and dedicated citizen of Dillon County.