Mount Calvary Baptist Church held the Awanas Club Closing Celebration on Sunday, November 15, at 6:00 p.m.
This ceremony had been postponed earlier in the year due to the Covid-19 pandemic.
Although a new Awanas church year has begun, the previous year’s awards were presented on Sunday, November 15.
Keith Coward, Awanas Club director, was the emcee for the event.
Mr. Coward spoke from II Timothy Chapter 3: 12-15 and also verse 5.
The Awanas Club leaders always instructs the children to tell someone about Jesus and invite someone to church. Mr. Coward also stated that we want to see kids come to Christ and know Him. We want the kids to make an impact in our community. It is Awanas desire to help these kids to build a foundation.
Coward thanked the church family for the church’s help and commitment to the Awanas Club Program.
Mrs. Emily Mew, co-director assisted Mr. Coward with the awards. Each group from the Cubbies to the Listeners were recognized during the program. Some of the children were not present. However, everyone was recognized.

Two-year old Meredith Campbell was the first to receive her award for Awana Bees. After her award presentation, the 3- and 4-year old Cubbies were recognized including Benton Bethea, Brayden Hasty, Colton Campbell, and Landry Walters.
The Sparks, ages 5k – second grade including Nolan Barnes, Grayson Griffey, Wren Hedgepeth, Ava Huggins, Gabby Kirven, Abby Poston, Jackson Price, Eli Meekins, Kase Coward, Avery McKenzie, and Edeigh Walters.
The points winners for the Sparks were: first place, Avery McKenzie; second place, Kase Coward; and third place, Edeigh Walters.
The T&T group were from the third grade through the sixth grade and included: Abby King, Maddy Miller, Gavin Grant, Carson McKenzie, Jude Mew, Chayse Walters, McKenna Meekins, and Heath Mew.
T&T points winners were: first place, Jude Mew; second place, Maddy Miller, and third place, Chayse Walters.
The T&T Timothy Award went to McKenna Meekins and Heath Mew.
The Victory Award went to Heath Mew. He is the second person who has completed everything in the program since Mount Calvary Baptist Church began Awanas in 2005.
A “prize box” is given each week during the program as a bonus award to the children. Each child must learn 3 Bible verses before being allowed to go to the “prize box” for an award.
Mr. Coward acknowledged all of the Awanas team leaders including Sparks and T&T leaders. Additionally, Dustin Mew and Brent Hasty were recognized as the Games leaders.
Special recognition was given to the food group consisting of Jeff Tanner, Jimmy Tanner, and Debbie Hill who supplied food treats every week. Emily Mew was recognized as the a listener plus all of her other duties.
A special time honored two adults who have given so much over the years to the Awanas. Both of these two, Jo Alice Webster and Preston Davis, are at home with our Lord.
At the conclusion of the Awanas award ceremony, Rev. Harold Cooke spoke from chapter 5 of Matthew.
Pastor Cooke also stressed that these kids will some day be the leaders and bosses of everything.
Pastor Cooke also noted “Do you know the same Jesus who is being taught to these kids?”
An invitational hymn was sung followed by the Benediction.
Mount Calvary Baptist Church is located at 405 Mount Calvary Road, Dillon.

END_OF_DOCUMENT_TOKEN_TO_BE_REPLACED 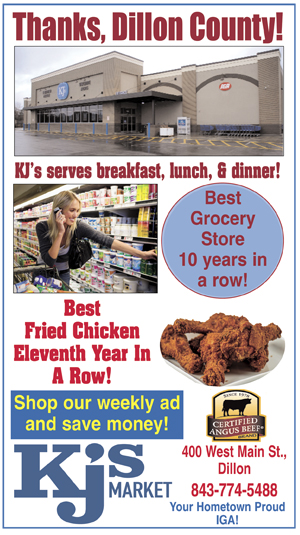 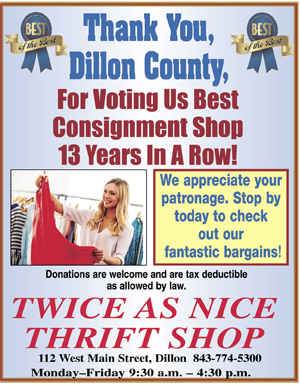 A hero is no braver than an ordinary man, but he is brave five minutes longer.
Ralph Waldo Emerson
The only stupid question is the one not asked.
Latin Proverb