Sometimes we chase the impossible fish where a single bite can make the day and on other days, it is fun to enjoy catching quantities of fish. It was late May, still too early to find the Tarpon which have been my target for 7 years, and I was in the mood to catch red drum. Ryan Stephens pitched the possibilities of catching Cobia and Kings, which are usually found offshore but due to the excellent forecast, we felt that we had a chance. These are fish that I cannot usually reach with my skiff because of the ocean waves but under these conditions, we thought we may have a very diverse bag at the end of the day. 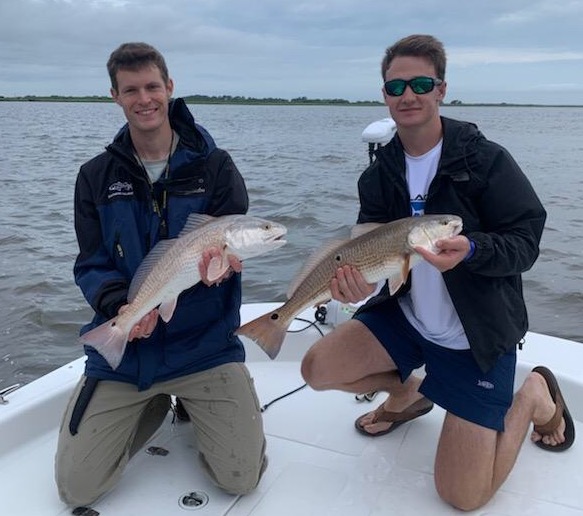 Daniel Camp, Ryan Stephens, and I left Dillon at 4:30 Saturday morning heading to Georgetown. We usually say that we have to leave early to catch the tides at the right time which is often true, but the real reason is to have the time to get the most out of the day. The ride in the early morning is always exciting and far more talkative than the ride home when everyone is tired.
We bought live mud minnows and frozen shrimp, then launched the skiff into Georgetown’s Winyah Bay. The skies were clouded, and it looked like it could rain at any time. It was low tide when we reached our first spot, an oyster bed exposed by the low tide, and a small creek running from the marsh grass. I baited my hook with a mud minnow and on my first cast, the cork hit the water and disappeared before it could drift with the current. I had a red drum on the line, and Ryan yelled, “Daniel, we need to get bait in the water!” My fish was a keeper, and the boat was full of excitement while everyone baited their hooks. I caught another keeper, and then hooked another. Daniel hooked his first red drum at the same time, and we guided our fish carefully to prevent a tangle. Both were successfully landed, and both were a hair too large to keep. We took some good pictures, released both fish, and returned to casting. Daniel also managed to catch a cluster of oysters which we cracked and ate raw while we fished. I knew that it could come back to haunt me but it was fun to eat them at the moment. We caught nine fish before the bite stopped, and we moved to the mouth of the river to catch the bulls in the surf.
We anchored as close as possible to the breaking waves and baited our hooks with large cuts of shad. The tide was now coming in, and we cast some lines to the breakers and others to the deep water. It wasn’t long before the first bull hit, and Daniel took the rod to fight the fish. This fish was so big that Ryan and I began to assume it was a blacktip shark. The crew was shocked when the fish finally came to the surface, and we could see that it was a giant bull red. We never had the chance to measure this one because the line snapped as Ryan strained to haul the fish into the boat. 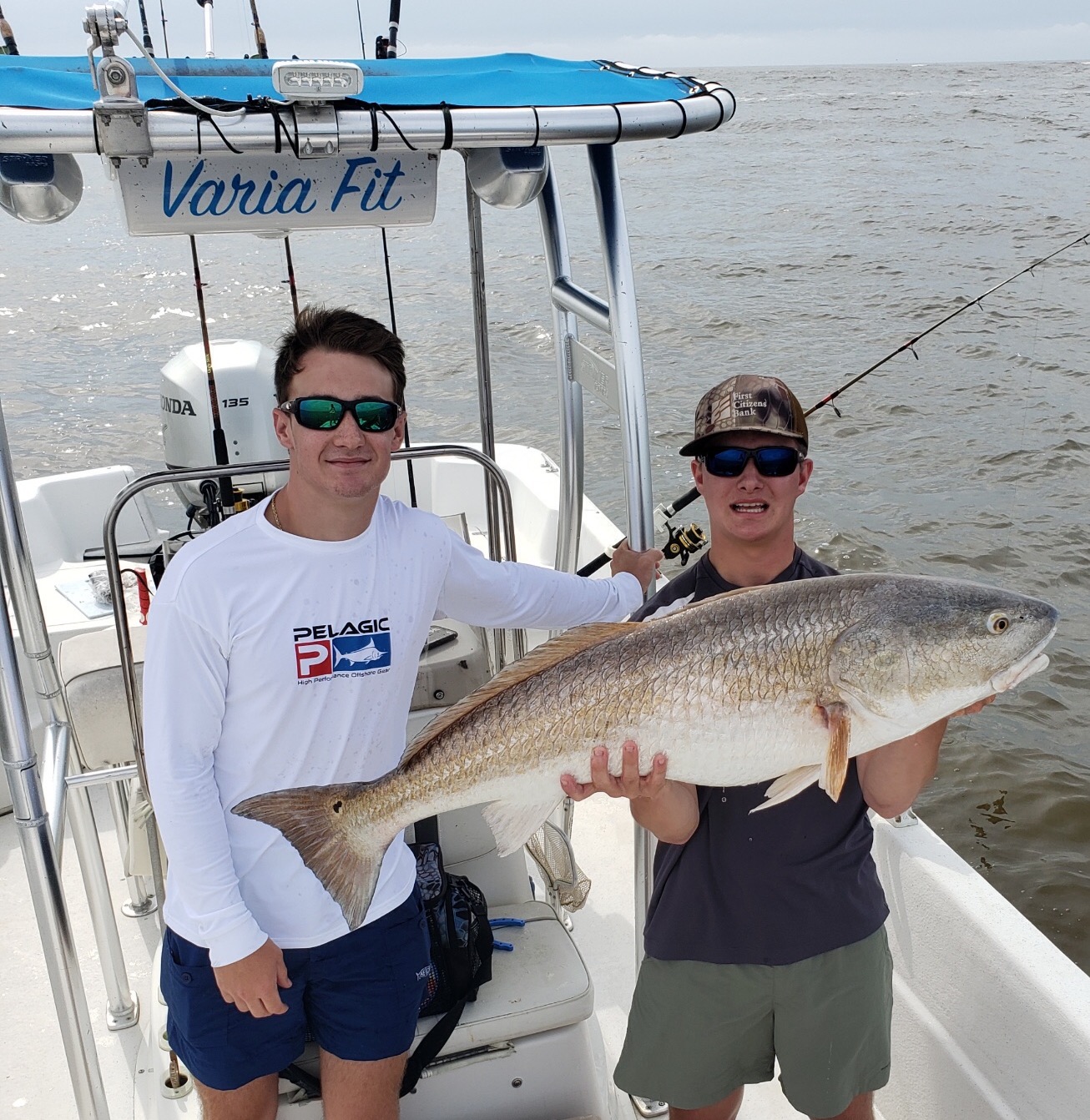 Another rod bent and Ryan took on the fish yelling, “They’re biting on the shallow side!” The fish swam in front of the bow, and we both leaned over to pass the rod under the anchor line. The rod was back in Ryan’s hands, and we safely landed our first bull red of the day. The fish was measured to be 43″ long and was released to fight another day. Daniel had another chance at a bull and successfully landed it .
Catching bull reds can wear you out quickly, and so we drove out into the calm sea in search of schooling fish. Cobia and kings can be found near schooling menhaden at this time of year, and it was not long before we came across a school with bait jumping. The plan was to catch some menhaden and float them just outside of the school of bait. We searched the boat for my 8-foot cast net but I had left it in the car. There was no time to go back to the boat ramp, and so we fished unsuccessfully with frozen cigar minnows.
We found the line where the dark water from inshore meets the blue water of the ocean, and we trolled with hope for a king makerel to bite. The ocean seemed to be quiet with no birds or schooling bait activity so we reeled in our lines and sped toward the Winyah Bay jetties. We set the anchor positioning the boat as close to the rocks as possible and began fishing. We used shrimp suspended under a float with 5 or 6 feet of leader and floated them as close to the rocks as possible. My cork submerged, and I fought a keeper red drum into the boat. Ryan caught one on a bottom rig, and another using a float.
A storm was building inshore, and we could see the wall of rain approaching We pulled our rain gear from the dry box and prepared for a wet ride to the coast. The ride through the storm was actually refreshing and cleaned the boat too. We had a full haul of fish to cook when we came home as well as plenty more released.
We had a great day catching red drum, and it is good to appreciate how many forms of fishing can be used for catching them in the different environments that they live in.
Bottom fishing for the bulls and fighting the great pull of these fish is a thrill but we also enjoy the up close and personal approach for the smaller slot fish that are found in the grass and oysters.
The boat and crew were proud on the drive back to Dillon after a successful day on the water, and it was a good way to lead into the long and stressful tarpon season to follow.