“I ride for the Wounded Warrior Project,” stated Randy Roscoe when he arrived in Dillon on Wednesday, August 28. “This is how I inform the veterans of my way of saying thanks.” 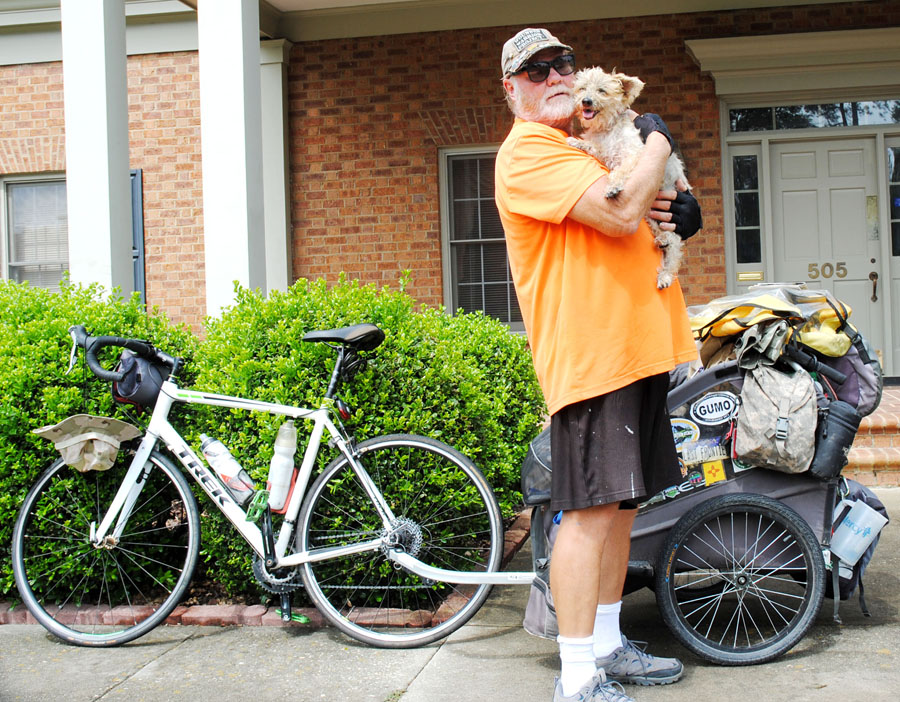 “I want to bring awareness to the Wounded Warriors of America.”
Roscoe started this year’s journey on his bicycle on his sixty-third birthday on May 13 with his pet dog “Atticus” from Anchorage, Alaska, to El Paso, Texas. This “leg’ of his trip took seven weeks.
He departed from Dillon heading to Washington, D. C. From there he will head to Jacksonville, Florida, and from there to Tampa, Florida where he will “winter” with his sister.
Roscoe has been riding since 2012 to raise awareness, and he intends to continue his travels to all parts of our country while informing the public of our great veterans and his love for the Wounded Warriors of America. Of course, Roscoe is accompanied by his companion, Atticus, his beloved pet whom he acquired from a friend who could no longer provide for him.
Roscoe makes Atticus as comfortable as possible along the way. He always stopped about every hour to allow Atticus to stretch his legs and have water and a snack.
At night, they camp along the way to their next venture in their trip while all the time Roscoe is talking about the veterans to whomever will listen. His love for veterans is evident each time he speaks.
To this point, Roscoe has traveled nearly 45,000 miles on his bicycle while pulling a trailer. Presently, he is on his second trailer as the first one caught fire and was destroyed some time ago after having 25,000 miles placed on it.
To date, Roscoe has traveled in every state west of the Mississippi except for Hawaii. He has traveled in at least 37 states and has been in over 72 newspapers to date while always promoting our veterans.
During his travels, Roscoe has learned to be self-sufficient as much as possible. Occasionally, he will stay at a church and will ask if the church has a food pantry where he may obtain some food. While not traveling, Roscoe works to save money for his next trip to promote the veterans.
Roscoe shows a special interest to the Vietnam veterans who he believes received bad treatment from the public when the veterans returned home from serving in Vietnam.
In the winter he will have an opportunity to visit the Wounded Warrior Project headquarters in Jacksonville for the second time.
One can obtain information about Roscoe’s bicycle journey on Facebook® at Roscoe’s Tour Across America. Information about the Wounded Warrior Project can be found at http://www.woundedwarriorproject.org.
Roscoe resides at 11228 Pony Soldier, El Paso, Texas 99326.