Our shuttle arrived, and Mike stepped out of the van to greet us. He is the owner of Mountain2Island Outfitters and has a shop in Radford Virginia, next to the New River. Mike and I spoke over the phone several times, and he agreed to provide our Claytor Lake shuttle and gave valuable information in the planning stages. We realized how bad we smelled when we sat together in the car, but the relief of having air conditioner outweighed all.
Mike doesn’t usually provide a shuttle service, but he knew the river that we were tackling and wanted to see us through. Our original plan was to walk to a grocery store to restock on food and ice after we are dropped off in Radford, but Mike was kind enough to take us to a grocery store and wait for us. Duncan and I raced through the grocery store planning meals while Elijah and Ryan waited in the van picking Mike’s brain about the river ahead. Mike warned us that our nearest obstacle would be Arsenal Rapids. Duncan and I returned to the van, stuffed the coolers, and Mike dropped us off at the Radford boat ramp. We thanked Mike for his help going above and beyond what we initially asked for and said goodbye. 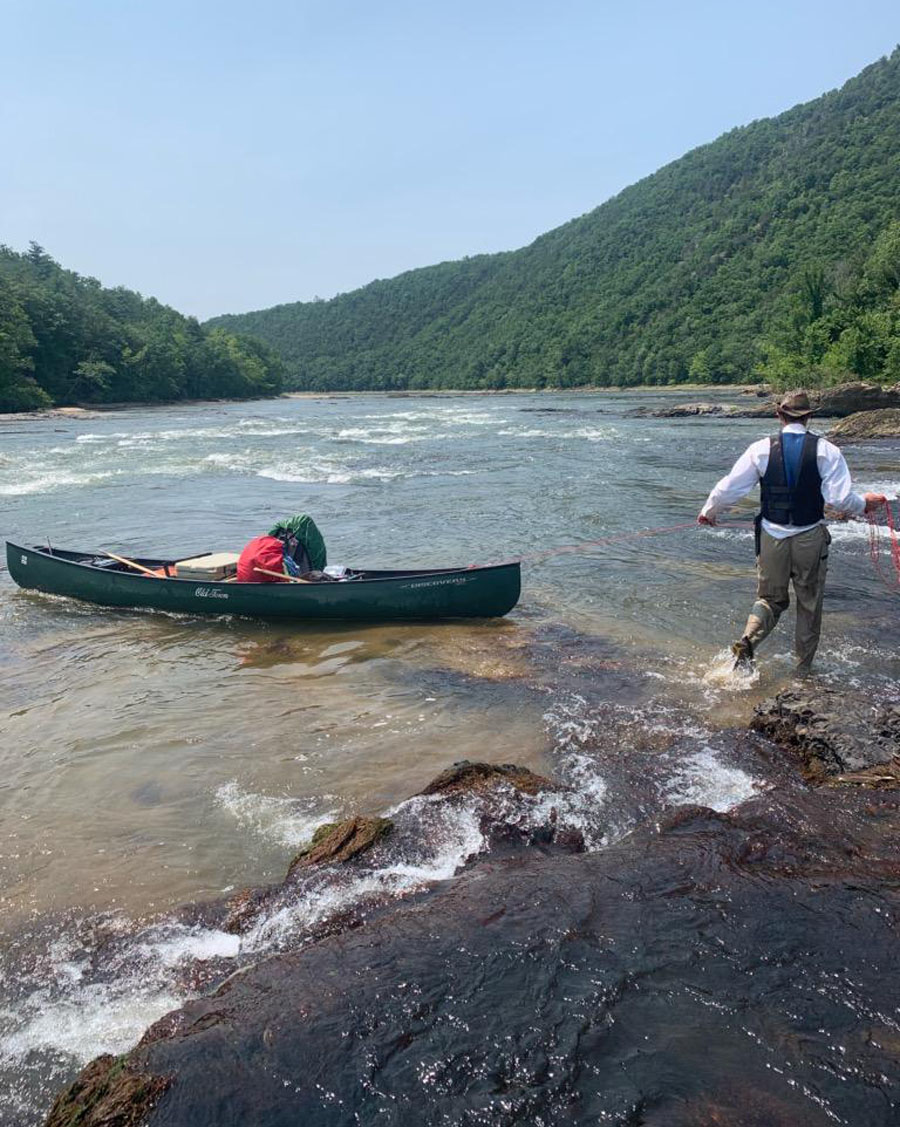 The boats were loaded, and we shoved off from Radford and into our Q3 of the New River Expedition. The river was swift from the start, and we looked as we passed great cliffs on one side and the fading city on the other side. A beautifully groomed golf course captured Ryan’s attention for a period until we passed it. Ryan said that he could have collected a lifetime supply of golf balls from the riverbed if we had time to stop.
The two canoes were making great time and eventually passed guard towers, and we were officially entering the Arsenal Army Ammunition Plant. Built in WW2 and still in use today, the Arsenal is used to manufacture ammunition for the military, recreational shooters, hunters, and even fireworks. The Arsenal was well- marked as government property, and no shoreline trespassing was allowed. We knew that being in the arsenal, we would soon encounter the class 3 rapids ahead. Sure enough, “Rapids!,” Ryan called from the bow. A series of riverwide ledges waited before us. Our clunky canoe slid gracefully over each drop and allowed time to paddle and gain speed before dropping over the next ledge. Duncan and Ian were dropping over the ledges behind us, and Ryan and I shouted in celebration when the rapids were finished. But it was too soon… the current picked up, and we realized that the greater falls were just ahead. The current snaked through an “S” curve through boulders before compressing into the falls which shoot the currentout into a cliff. Ryan and I scrambled our paddles to gain speed to follow the S curve before the falls. From the rear canoe Duncan later commented, “The lead canoe made turns faster that I thought possible.”
The bow extended over the falls, and Ryan screamed as it fell, “This is it! Were going to flip! We’re going down!” He never quit paddling. Ryan managed one last stroke of the paddle as he was overtaken by the surf, and by some miracle, both Ryan and the boat resurfaced. We sped past the great rock wall that could have been our end, and we wedged the bow of our almost swamped canoe into the dirt. Ryan and I bailed water watching upstream to see the second canoe make the same turns and survive the drop. They too were full of water and joined us by the shore to bail out the boats. At that time, Duncan said, “I have too good of a life back home for me to die up here.”
Despite the rapids, we reached an island on which we pitched our tents and unloaded cooking gear. The entire island was thick with brush, but the tip was a rocky shoal that allowed room to walk, cook, and have a fire. Duncan and Ryan pitched their tent on the rocks while Elijah and I planned to sleep in the tick-infested brush where the ground would hopefully be softer. Dinner for this night would be ground beef and mixed vegetables in burrito wraps. The crew enjoyed the burritos while watching smallmouth bass feeding against the rocks. The sky grew dark and we saw the international space station fly overhead until it disappeared in the distance. “It’s already over Europe,” Ryan remarked. The mountains on either side of the river were flashing with lightning bugs, and we laid out the map by the fire to see our progress. I counted down the days and probable goals for each day and for the first time on the trip, I saw that it was possible for us to reach our goal. The rain started, and as I tucked into my wet sleeping bag, my only concern was that the river would rise over the island and wipe out our tents. 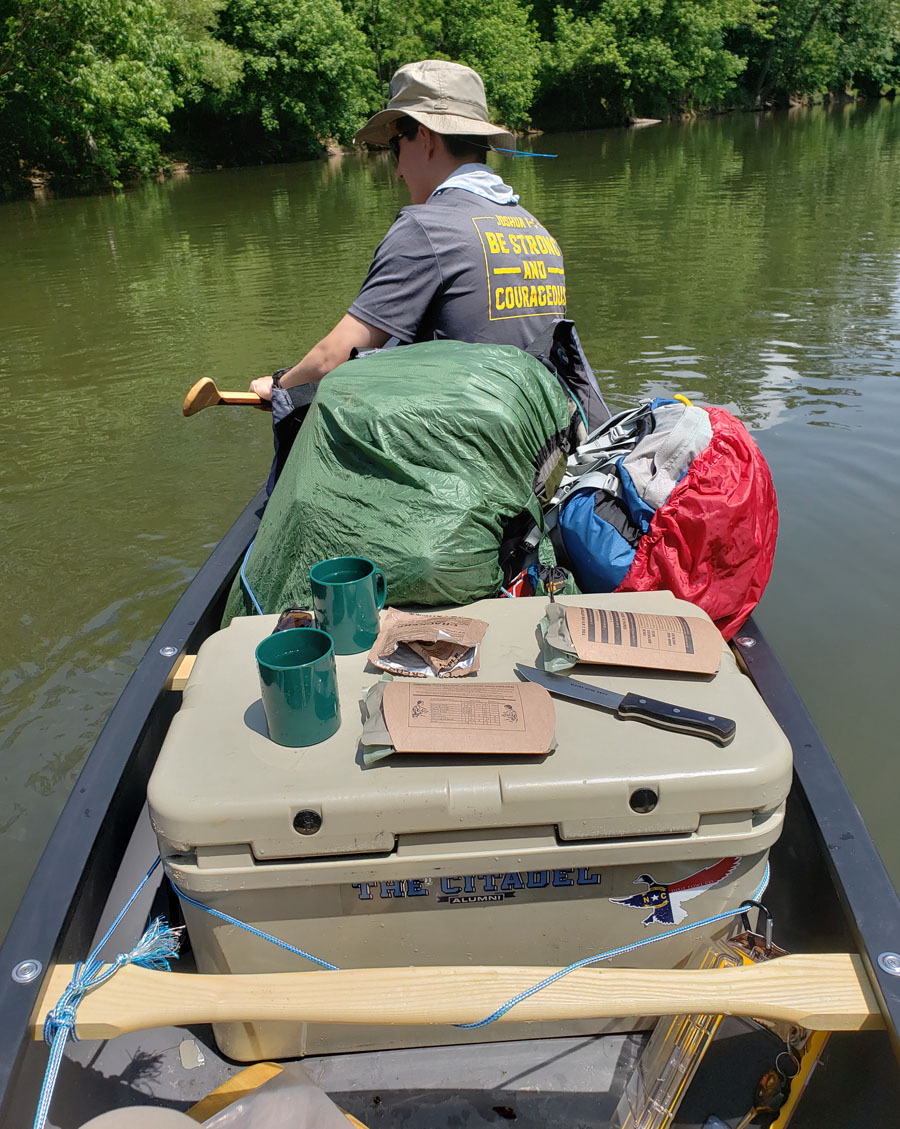 We woke the Wednesday morning, and I heated coffee for our daily safety vs. goal meeting. Duncan and Ryan came out of the tent and showed me a forecast predicting constant rain and storms from now through the rest of the week Our discussion was about the impact to morale and cooking ability when we would be in constant rain. Rain is no issue on a canoe when gear is packed but when everything is exposed at camp, constant rain can be demoralizing. The comment was made that in these days we are conditioned to quit when nature presents the opportunity for excuses when in fact, we can overcome that and more like Teddy Roosevelt or Earnest Shackelton did. We decided that we would press on.
We finished breakfast, loaded the boats, prayed for safe travels, and paddled down river. I said to Ryan, “It’s Wednesday, and we haven’t flipped a boat. We might make the whole trip without a capsize!”
“Why would you say that!,” Ryan said. “Now you’ve jinxed us and were going to get wiped out.” As we passed the end of our island, we noticed a lone deer standing on the end of the island. The deer saw us and lunged through the water until he could no longer touch, and he began swimming. Our canoes were never close to the deer, but he did not want to chance an encounter with us. I am always impressed to see how well hoofed animals can swim with so little traction in the water. The deer was on land and disappeared into the woods in no time.
We paddled through a long section of river with no current. The river was wide and looked more like a lake. We could see miles downstream where the river remained much the same; wide with little current. The mountains still lined the river valley but the terrain ahead was visibly different. A range of 5 parallel ridge lines boldly cross the range from McCoy to Glen Lynn, Virginia. Each range boldly breaks for the New River to pass through and a great class 4 rapid called “Big Falls.”
The river began to accelerate as we rounded the bend leading to the falls and it started to rain as forecasted. The ridgeline now towered overhead, and the sides where it broke for the river to pass were rocky ledges. We asked a fishing boat about what side we should pass on, and he said that most rafts take the right side. Our two canoes aligned with the right side, and the fishermen cranked the engine and left. “That’s a bad sign when it’s too bad for them to watch,” Duncan said. Without pulling over to scout the rapids for the best line, Ryan and I paddled headlong into the fray directly followed by Duncan and Elijah. The entrance to the rapid was over two hundred yards long. and our canoe took on water crossing the multiple ledgesbefore the main shoot. Our canoe was water heavy by the time we reached the main rapids and maneuvering the canoe to dodge rocks was difficult. The bow plowed into a wave, and it was all she could take. The canoe submerged, but Ryan and I remained seated, our heads and shoulders being all that was out of the water as we steered and balanced with the paddles. The canoe was lined up as it entered the falls, and Ryan and I were booted from our seats.
We floated in the water, and I turned around to see Duncan and Elijah make the drop and knowing that they were about to flip, made landfall before tipping over. Ryan and I floated beside the canoe as it drifted. We could not touch the bottom nor could we swim the boat to land and so we calmly floated beside the boat. The helplessness would have been cause for many to panic, but we waited until our feet could touch rocks and slid over the rocks until we could find one to grip. From there, we regained control and took the boat to land. Our gear was tied down and our loss is were minimal. We lost most of the water, Elijah’s paddle, my sunglasses, and shoes, and Duncan’s thermos (which was later recovered down stream).
We passed two more ridge breaks and several more rapids on our way North and the goal was to stop in Pembroke, Virginia to eat lunch, restock on lost supplies, and to recruit a shuttle service for Bluestone Lake.
We were so far from home with no connections and could only hope that someone would be willing to help as Bluestone Dam was truly an impassable obstacle. It was pouring rain and thunder rolled in the distance.
We hugged the riverbank often paddling underneath the treelimbs to find some mediocre shelter from the rain. The rock cliffs on either side of the river were hundreds of feet high and captivated our attention attention as we paddled through the canyons towards Pembroke, VA.
Will the New River Expedition find help in the town of Pembroke, VA to shuttle them around the Bluestone Dam? Find out next, only in The Dillon Herald.