Mayor Todd Davis proclaimed May 17 as Diffuse Intrinsic Pontine Glioma (DIPG) Awareness Day in the City of Dillon. He was accompanied by Kendal Brown at the signing. 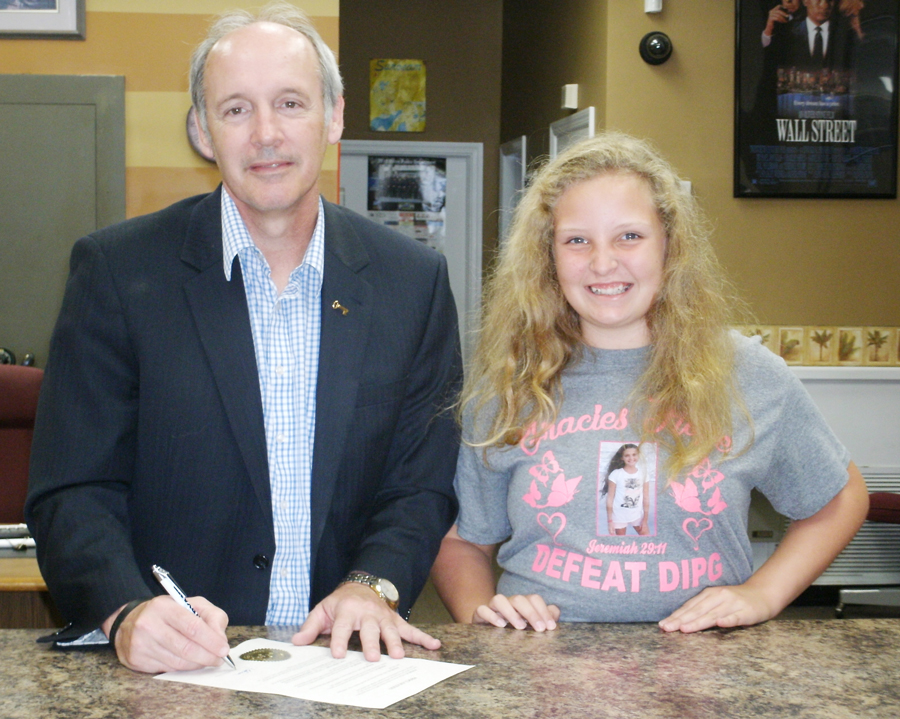 The proclamation reads as follows:

PROCLAMATION
WHEREAS, Diffuse Intrinsic Pontine Glioma (DIPG) is a brain tumor that is found in a part of the brain stem that controls essential bodily functions, such as heartbeat, breathing, swallowing, eye movement, eyesight, and balance; and
WHEREAS, DIPG affects between 200 and 400 children in the United States each year; and
WHEREAS, brain tumors are the second most common type of cancer in children, and are the leading case of cancer-related deaths in children; and
WHEREAS, DIPG is the leading cause of childhood death pediatric brain tumors; and
WHEREAS, prognosis has not improved for children with DIPG in more than 30 years, but new medical technology and research finally offer hope for treatments for children afflicted with this disease; and
NOW THEREFORE, I, Todd Davis, Mayor of the City of Dillon, South Carolina, do hereby proclaim May 17, 2019 as DIFFUSE INTRINSIC PONTINE GLIOMA (DIPG) AWARENESS DAY, and I call this observance to the attention of all citizens.
IN WITNESS WHEREOF, I have hereunto set my hand and caused the official seal of the City of Dillon, South Carolina to be affixed at Dillon County on this 17th day of May in the year Two Thousand and Nineteen.

Humility is not thinking less of yourself, it's thinking of yourself less.
C.S. Lewis
True friendship can afford true knowledge. It does not depend on darkness and ignorance.
Henry David Thoreau
+81
°
F
H: +81°
L: +58°
Dillon
See 7-Day Forecast