The Yellow Jessamine Garden Club attended the 2019 Coastal District Spring meeting at the beautiful Wild Wing Plantation in Conway, S.C on Thursday, March 14, 2019. The theme of the meeting was “Hats of to Gardeners.” Ten members attended.

The Wild Wing Plantation Banquet facility was charmingly decorated. Each table centerpiece was decorated with a vividly colored hat on a wooden display and greenery centered around it. Each seating was given an Itinerary along with silverware and decorative linens. Each seating also was given a pinecone bird feeder as a welcoming gift.
The attendees were greeted with an elaborate spring entrance at registration. Then everyone gathered in the banquet hall for a breakfast of delicious fresh fruit and sausage quiche with a choice of orange juice or coffee. As the guests mingled and explored, vendors were placed throughout the banquet hall to browse and shop.
At approximately 10 am, the meeting was called to order by Coastal District Director Allyson Hirsh. She welcomed all visitors and guests. The attendees recited the Pledge of Allegiance and Pat Taylor read a welcoming poem, written by Carolyn Floyd and edited by Sims Gasque. The Honorable Barbara Blain-Bellamy, Mayor of Conway, gave the greeting for the day as she presented Coastal Director Allyson Hirsh and President Donna Donnelly keys to the City of Conway.
Allyson Hirsh then gave the presentation of the table, which included President Donna Donnelly, President-Elect Trish Bender, the Honorable Bellamy, Coastal Co-Director Susan Carter, Coastal Director Allyson Hirsh, among several others. Allyson also gave the recognition of honored guests, such as past presidents and members. 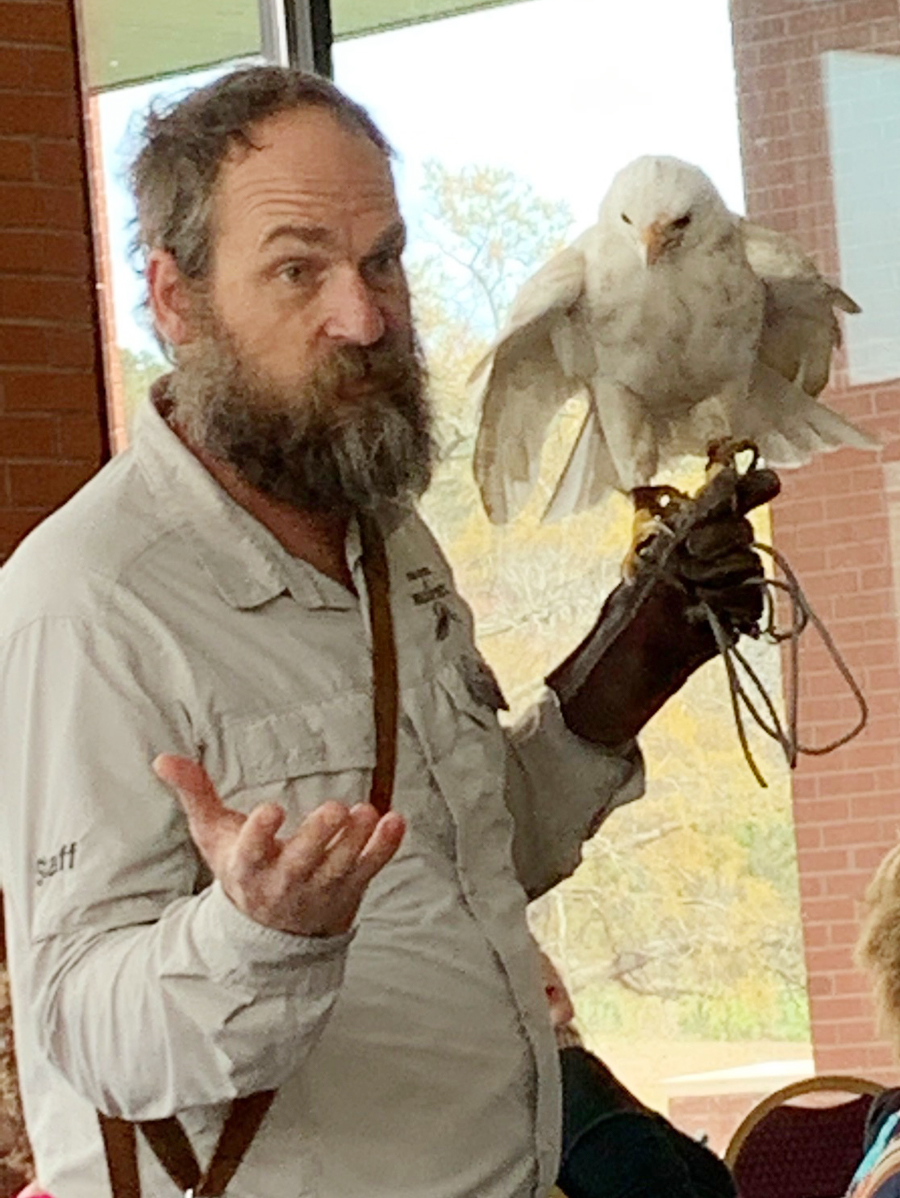 President Donna Donnelly gave the President’s Message as she enters the end of her presidency. She spoke on how grateful she was for the wonderful two years of service. She will be presenting the new President next month at the GCSC State meeting in Beaufort.
Coastal District Co-Director Susan Carter presented the Coastal District awards as The Yellow Jessamine Garden Club won 9 awards including First place in the yearbook.
The report of the Coastal District Nominating Committee was given by Allyson Hirsh and Emily Stephens presented the Design Program.
Next on the itinerary was the Invitation to Lunch by Pat Taylor and the blessing of food by Dr. Kim Strong. The delicious meal prepared was a fresh croissant with juicy grilled chicken, on top of crisp romaine lettuce, cranberries, mandarin oranges, and shaved mozzarella cheese. For dessert, a chocolate peanut mousse was served.
After lunch, Janice Cutts introduced the guest speaker. Mr. Stephen Schabel is the Director of Education at The Center for Birds of Prey in Awendaw, S.C. and he presented an educational program on birds of prey.
The Center provides medical, education, response and research, and ongoing studies of endangered and threatened species in South Carolina. It also provides tours, flight demonstrations and special programs for the public. Donations and volunteers are welcome.
As part of the program, Mr. Stephen Schabel brought two birds with him, Albino Red Tailed Hawk and a Spectacled Owl. Mr. Schabel walked the Albino RTH throughout the room and gave his story on how he received this beautiful animal. This amazing animal was victim to a fight with two other birds. Therefore, this is how the RTH came to the Center in Awendaw.
The other bird, a Spectacled Owl, was allowed to flight demonstrate for the attendees. This was so exhilarating! Mr. Schabel would hold a piece of food and whistle. Then the food would be placed on a post and the owl would fly to his post. The owl was allowed to show his natural flying technique throughout the room. The guests could not touch the birds due to the bird’s instinct, but both birds were absolutely stunning and fascinating to watch. There was also a question an answer segment.
The meeting was adjourned as Allyson Hirsh gave the invitation to the 2020 Spring District meeting. She also recommended attending the GCSC 89th Convention in Beaufort, S.C. The new officers will be installed at this meeting.