Skyler McCoy took the next step in her softball career as she signed with Queens University of Charlotte on Thursday, January 31, at the Dillon High School Athletic Office. 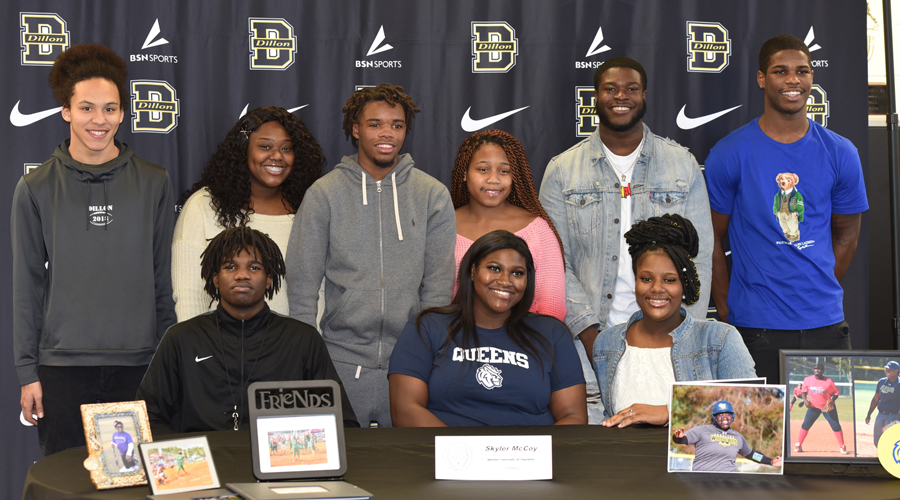 She was joined by Dillon High School Assistant Athletic Director Zach Hayes, coaches, family and friends to make this an extra special day in her life.
Hayes thanked her parents for allowing Skyler to participate in the sports program. He also thanked her parents for the time they spent with Skyler in the sports arena. Hayes extended best wishes to her in her future in softball at Queens University of Charlotte, N.C. Hayes thanked her for her contributions to the Dillon sports programs.
Hayes stated “If your parents don’t want you to do that, then don’t do it.”
Skyler was offered by other colleges and universities such as Erskine College and Allen University. However, she accepted Queens University of Charlotte, N.C., as she felt comfortable in the atmosphere there.
Not only is the atmosphere comfortable there, the coaches and everyone else were very open and welcomed her to the University.
Playing softball has given Skyler a very unique opportunity of meeting and the challenge of playing against diverse sections in the country. She has managed to travel the softball circuit and play at different levels.
Skyler has instilled in herself the right attitude for excelling in her sport because she is aware that everything does not always go o her way and that she must never give up if she wants to succeed.
Not only does Skyler play positions in the outfield, she also plays first and third base. She also plays volleyball and is a cheerleader for Dillon, and she loves to draw.
While playing softball at Dillon, she was named All Region and All-Rookie.
As Skyler pursues her continuing education at the university, she will major in Biology and Pre-med.
Skyler’s parents, Chris and Tonja McCoy are very proud of their daughter. They have enjoyed watching her grow in her sport and looks forward to being there while she continues her pursuit of the game of softball.

Life is what happens to you while you’re busy making other plans.
John Lennon
Give a girl the right shoes, and she can conquer the world.
Marilyn Monroe
+81
°
F
H: +81°
L: +58°
Dillon
See 7-Day Forecast