Since our first striper fishing expedition launched back in December ’15, we have seldom encountered schooling striper on Lake Moultrie. After hearing reports of schools coming from an old legend of the lake, Daniel Coleman, Dawson Jordan, Ryan Stephens, and I answered the call and loaded the boat. 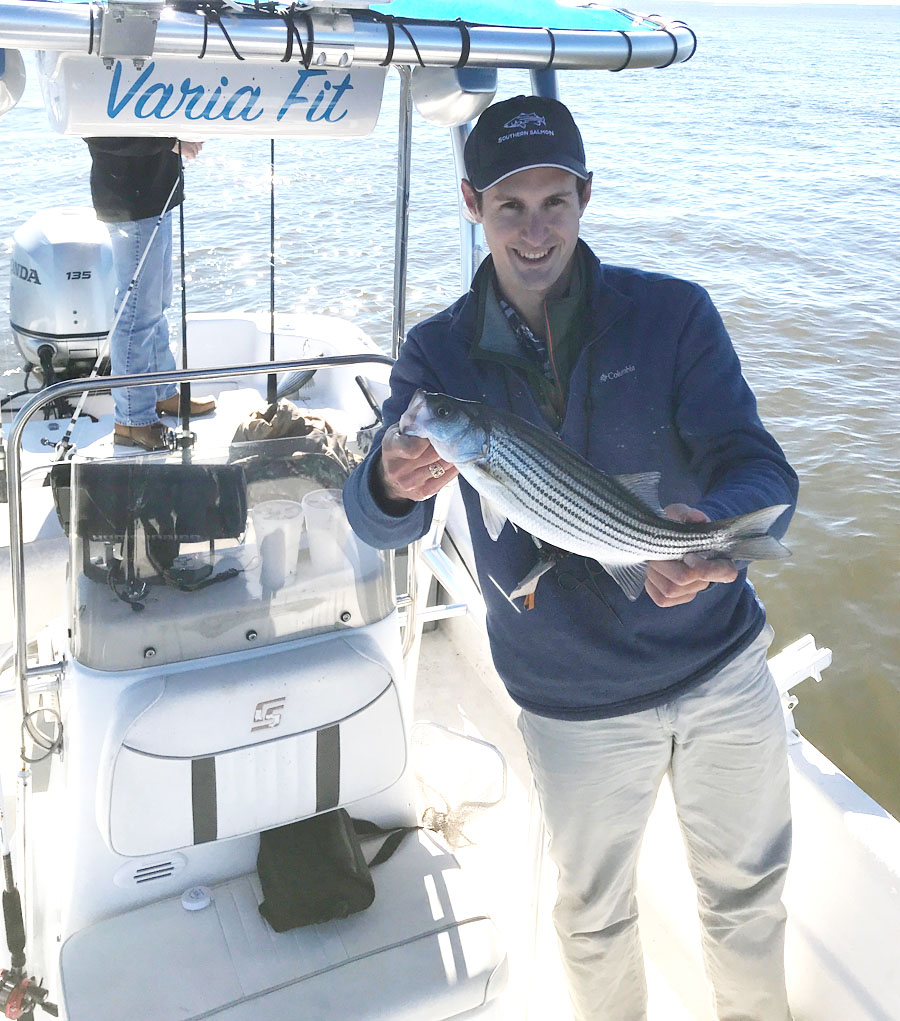 Time was limited due to prior commitments and we had to be off the water by noon so we met early in Dillon, made coffee, and hit the road. This trip was going to be a fast dash to the lake and back home, our success hanging in the balance of finding a school of striper. Of course, we would never exert the effort of an entire trip with only one plan of attack and so we had backup rods rigged for trolling and live bait fishing, nineteen rods in all. The anticipation mounted as we drew near the launch point and I heard a squeaking sound behind me. I turned around and saw Dawson and Ryan calculating our percentages of success on the fogged window. I was surprised that they rated our chances to be so low.
We launched the skiff at Blacks Camp and made way into Lake Moultrie. Dawson let the striper flag fly and I peered through my telescope to find the birds. A school was already present and we raced full speed into the vicinity. Stories of schooling striper can raise up quite the crowd and boats were tightly packed between the rocks of the canal.
We started casting artificial lures, rattle traps, and plastic swim baits with little success. Ryan landed a 23″ keeper on his first cast but the action ceased. Plan B was to try trolling with umbrella rigs, 2 large metal umbrellas pulling 16 lures each, to imitate schools of bait. We worked our way through the choppy water in Lake Moultrie until we got tired of the splashing and so we reeled up the rigs and motored back to the canal. Ryan sat beside me at the consol to seek refuge from the splashing. We took a wave over the port bow and I had enough time to duck out of the way. Ryan screamed with the shock of cold water but the boat kept on fighting the waves.
We finally made it back to the west side of the lake and into the lee of the trees where the water was calm. The birds and boats were still congregated around the rocks but we had to run back up the canal for hot chocolate. We docked at Blacks Camp so that Dawson could buy live herring and Ryan ordered hot chocolate for the crew. “This was two hours of my summer that I’m giving y’all!” Ryan said as he passed the much needed hot chocolate to the crew.
We embarked back to the rocks with a new wind of optimism, and we were catching fish before we could bait all four hooks! I fought the first fish and he measured to be a whopping 26″. We dropped him in the cooler and with our 2 keepers, officially had enough for a cookout.
There was no time to celebrate. Dawson and Daniel were both fighting fish and Ryan and I scrambled to the stern. For the next hour, we fought fish and baited hooks.
By the time our 24 herring were gone, we had caught 18 striper! Only two were keepers but the fast action was hard to beat. We continued to cast artificial lures but with less success. It was time to return to the ramp and the boat was trailered by 11:30. We celebrated our successful day of fishing with catfish sandwiches before driving home. We were crunched for time as Dawson had his own engagement party to attend and there was concern among ship and crew that his fiancé who was waiting for him in Dillon might be frustrated with his absence.
Luckily for Dawson, we did make it back home in time and the stripers that we kept were cleaned for dinner the next day.

END_OF_DOCUMENT_TOKEN_TO_BE_REPLACED

Make everything as simple as possible, but not simpler.
Albert Einstein
What you don't know can't hurt you.
Japanese Proverb