By Betsy Finklea
The honor, service, and dedication of the Station Nine (Oak Grove) Fire Department members was recognized at the department’s annual Christmas Party at Shuler’s Barbecue on Saturday night.
Assistant Chief Chip Rogers said every year is different and that 2018 had been an odd and very busy year. The department had close to 400 calls with still of the portion of the year remaining.
The year began with icy, cold weather followed by a hurricane and a drought which caused an array of issues throughout the year.
A video, which captured the essence of the what the fire department did during the year, was shown.
After the video, Rogers said that the fire department is now doing more than it ever has done as an organization. He thanked Larry Cox, a member of the Station Nine, for the time and effort he put into the fire service.
Aileen Cox. member, recognized Carolyn Hartley, who serves as treasurer of the organization.
Firefighters were presented a gift from various businesses who donated items.
Terry Weichel, member, presented service pins to Damon Carter, who received a one-year pin, and to Aileen Cox, who received a 30-year pin.
Sheila and Robbie McDaniel were recognized. Also recognized were Laverne Brigman and Danny Webster, who are life members; Dillon County Councilman Buzzy Finklea; The Dillon Herald; Larry Legette; Jim Leslie of the American Red Cross; Linda Hayes of Oak Grove; and their many hometown supporters.
Awards were presented to Chip Rogers, who was named First Responder of the Year, and to Taylor Jackson, who was named Firefighter of the Year. 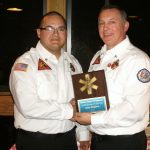 First Responder of the Year 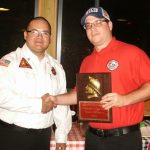 Fireman of the Year 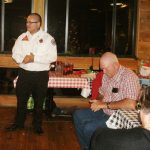 There are no shortcuts to any place worth going.
Beverly Sills
Our greatest glory is not in never falling, but in rising every time we fall.
Confucius
+81
°
F
H: +81°
L: +58°
Dillon
See 7-Day Forecast