The 4-Runner was stuffed with a week’s supply of gear and only the dog had space to relax. Our destination, the Alaskan Kenai peninsula in search of steelhead. At 3:30 a.m., we made our final stop for coffee and gas in Fairbanks before venturing off into the wilderness. It would be 3 hours before we would pass the next man made structure. 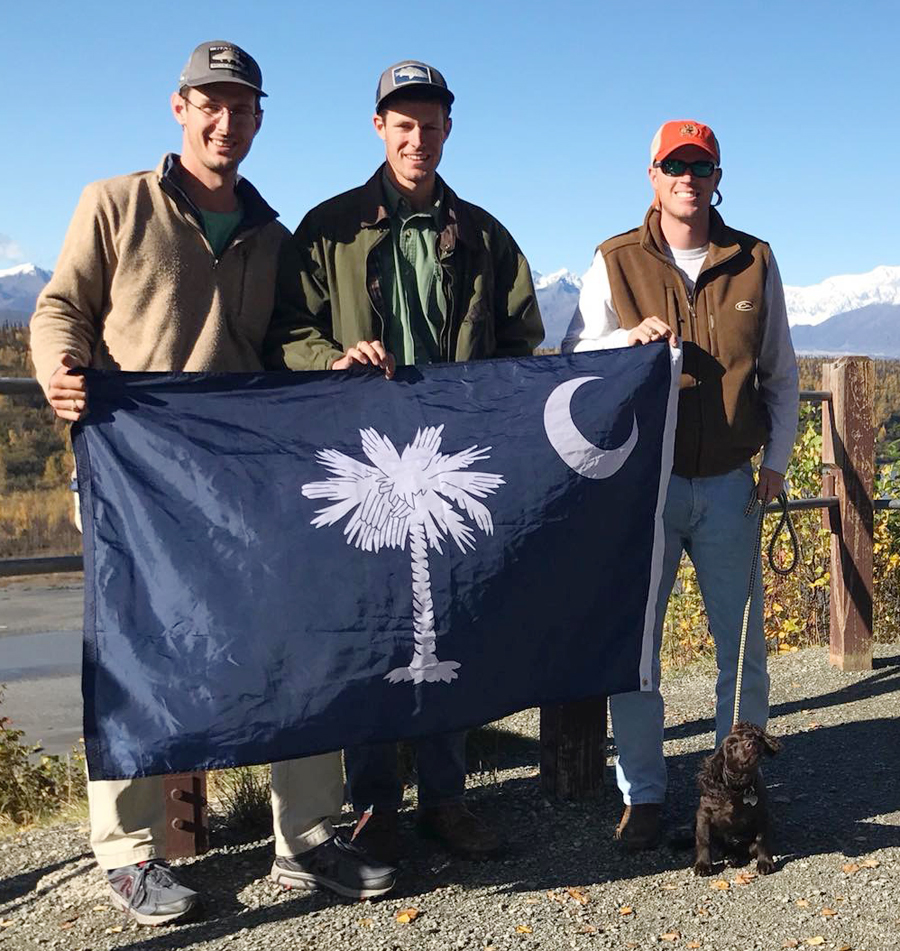 The first landmark was the Alaskan pipeline where we pulled over to walk and have a look. We drove on, and it was still dark when we came into the mountains of the Alaska Range. Here we pulled over where the Delta River flows from a giant glacier. The mountains to our back were over 14,000 feet tall and the spruce forest on the other side of the road was as large as North and South Carolina combined. Not one light was visible all the way. The wind and sleet that we felt at the moment would have to be too harsh for most animals and even the trees were worn, leaning, and brittle under the constant wind. We continued farther and found a spring in Black Rapids where we emptied the water bottles to refill with this spring water. Andrew said its the best water we will ever taste, next only to Herald Water. 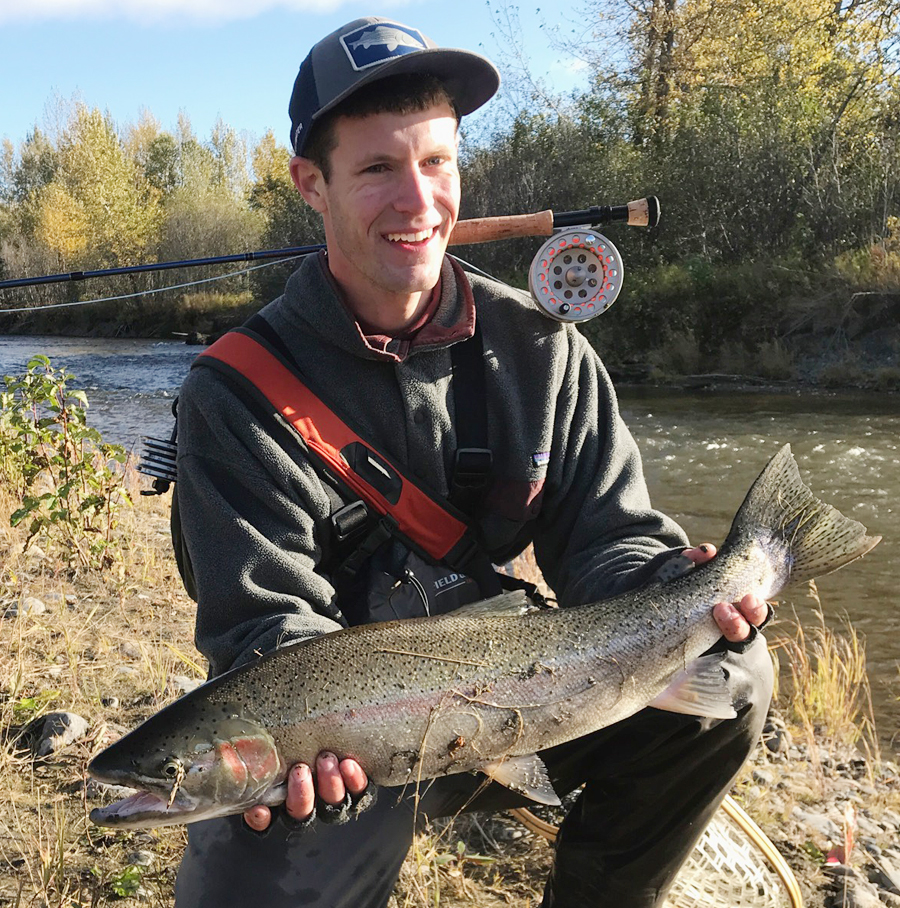 The mountains changed to forests and the forests to mountains again. The trees were looking healthier and fuller so we knew we were making it closer to the coast and leaving the harsh climate of the interior. The Kenai peninsula started with the Chugach Mountains, then we passed the aqua blue waters of the Kenai River, and soon we were driving along the cliffs of Ninilchik by the Pacific Ocean. 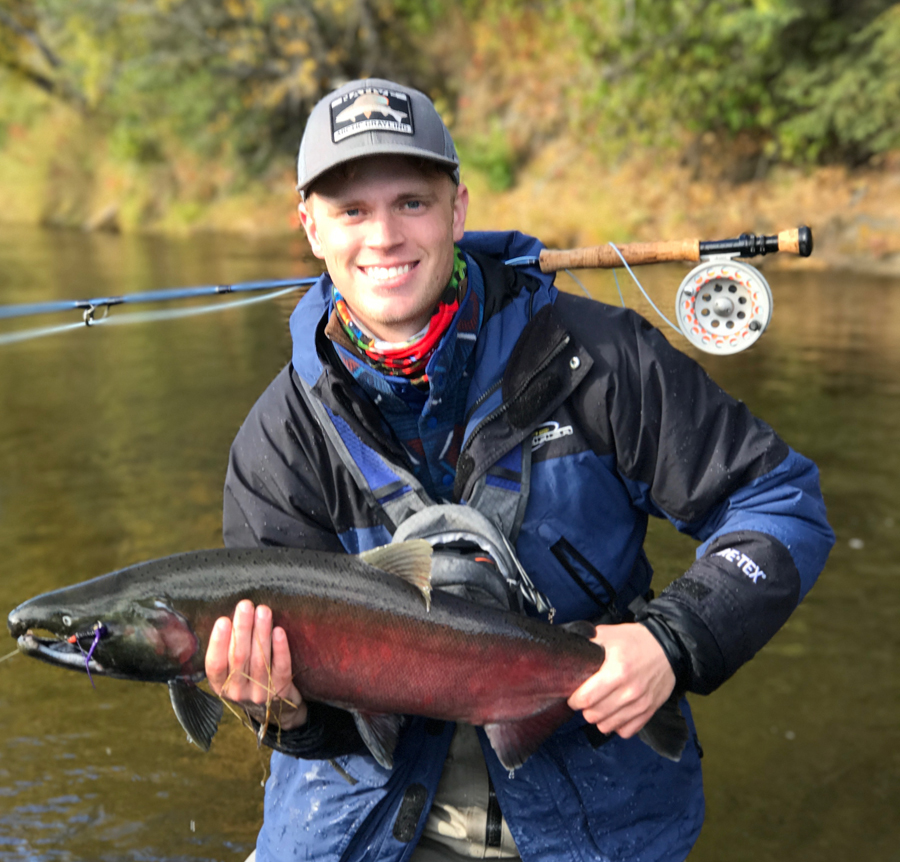 The next day was going to be dedicated to the pursuit of steelhead, the apex of all the salmonoids. Steelhead are a rainbow trout, born in the rivers, who swim to live their lives in the open ocean before returning to spawn. The steelhead is a perplexing beast who is classified as a trout but lives the life of a salmon. Unlike the salmon who all die, steelhead survive spawning and return for years down the road. The ocean bleaches their colors to chrome and their rainbow color returns when they swim into fresh water. We paused at a local fly shop to ask advice. The shop was no larger than the average bathroom, and located on the edge of the cliff, the owner had an unbeatable view. Dawson, Andrew, and I gave him the third degree in questioning until we were confident in our knowledge. We crossed the 3 steelhead rivers that we would be fishing the next few days, (Deep Creek, Ninilchik River, and Anchor River) and the thought that we were passing a place where the steelhead travel was an exciting yet daunting feeling. That night in the cabin, we prepared our heavy 8 weight fly rods for the next day. We spoke highly of our chances of success but we knew that the steelhead is not one to bite freely, and that a single steelhead would justify the trip. 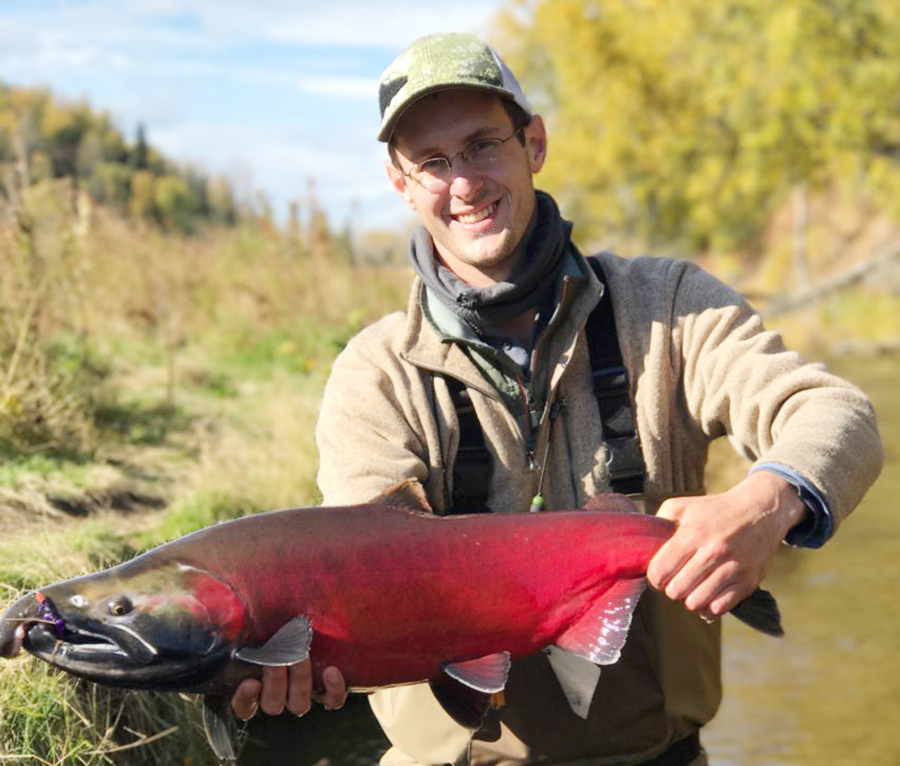 The alarm clock sounded early and we packed, determined to be first to reach the river. Others were in the parking lot getting ready as we walked by, and we selected our spot before twilight. Starting with an egg pattern, I cast and drifted my egg through the current into the tail of the run. Dawson, Andrew, and I were lined up and focused only on our bait.
With so slight a bump, I set the rod and there was a shaking pressure. Not the pressure from being snagged on a rock or limb, but something with life! In an instant the steelhead shot across the river making tremendous surges to buy himself some time. It was early in the day and I knew to play carefully because this may be my only chance. The steelhead was finally near the rocky shore and his chrome color indicated that he recently arrived from the ocean. I was about to net the fish when all tension was lost and my Anglers Image Leader connector had slipped off for no reason. I jumped in the water and caught the coiled leader to continue the fight by hand. With a flick of his tail, the line snapped, leaving me cold, wet, and without a fish.
It’s not everyday that I’m in Alaska fishing a steelhead river and so there was no time to loose being bitter. I rigged up with a streamer and continued. Dawson was next to hook up and landed a silver salmon, an excellent meal. He walked the fish to the cooler and with the next cast, landed another salmon! I picked a rock to knock the fish out and as I approached the fish, it shot out from under Dawson’s legs. I continued for the steelhead and got another hook up. I thought at first that it could be a silver salmon based on how many Dawson caught.
The fish fought like a beast and shot down the next rapid. I followed and as I stepped around some rocks waist deep in the river, I heard Dawson yell from below, “It’s a steelhead!” Both my hands gripped the rod now as I followed the steelhead down stream. Other anglers backed away to let my fish pass and understood that it was an unstoppable force. I called to Dawson to net the fish but our nets were too small. Dawson jumped around the fish trying to get the right angel while I yelled at him not to mess this up. I couldn’t rest until the steelhead was in my hands. By Dawson netting the head and Andrew netting the tail, we were able to gain possession of the steelhead and measured him to be 30″ in length and weighing 10 pounds. His dark green back and bright pink line along his side showed that this fish has been in fresh water for several days. After pictures, I released the fish to continue towards the spawning grounds.
The most puzzling aspect of this geography is that these mountainous streams that we fished, with Rapids, gorges, and fresh water, feed into the Pacific Ocean only 4 bends down stream. The steelhead took me around 2 bends and we fought halfway from the mountains to the ocean. From that point, nothing could hurt my mood, and Dawson too was in high spirits after his exciting salmon action. Andrew Case on the other hand, who had still caught nothing, was letting desperation get the better of him. We all have our off days in fishing and it often bleeds into everything we do. Andrew’s reel broke, he temporarily misplaced his citadel ring, and locked his keys in his car. We needed a reset and so we took a break for lunch.
We returned to Deep Creek and I caught another steelhead, this one was smaller and had the chrome color of one who had swam from the ocean today. We advanced up stream and fished within sight of each other. The sun was waning behind the peaks and time was running out for the day. I looked up stream and saw Andrew’s rod bowed over by a powerful force. I knew what had happened and abandoned my spot to assist. Andrew was mid fight with a chrome steelhead and this late in the day, there was no margin for error. Our nets were too small, and I found a fisherman sleeping on the bank. I woke him up so we could use his net and returned to land the fish. The one steelhead justified Andrew’s trip and as a lifelong fly fisherman from the SC upstate, he knew while he held it that this was his most proud fish to-date!
That night we explored the town of Homer and ate salmon for dinner. Sitting in the cabin, I wrote in the cabin guest journal about our day and Andrew wrote in his Alaska fishing/exploration journal-
“As kids, we loved and adored the South Carolina wilderness. From the Blue Ridge mountains to the low-country swamps, we cut our teeth on the great outdoors. Growing up, we dreamed of the west and how it seemed larger than life. Now we southern boys get to experience Alaska and all it’s beauty — the epitome of what defines the west.”—Andrew Case

END_OF_DOCUMENT_TOKEN_TO_BE_REPLACED

Make everything as simple as possible, but not simpler.
Albert Einstein
Painting's not important. The important thing is keeping busy.
Grandma Moses