The Yellow Jessamine Garden Club held a Blue Star Memorial Service on Saturday, November 10, at 10:00 a.m. at the National Guard Armory in Dillon.
Miss Barbara Causey opened the service with the reason for the Star Spangled Banner before she sang it that was followed by President Mary Ricks who welcomed everyone to the service and stated that it was a honor to place the marker.
Pastor Scott Moody had the invocation and expressed that we have freedom because of the veterans who have served in the past and in the present and that we will continue to have freedom because of those who will serve in the future.
Everyone in attendance had the Pledge of Allegiance to the United States flag.
Melissa Moody introduced the guest speaker, Sergeant Ronnie Stone who served in the Marines in the past. He recounted that he and a friend, Bill Hyatt, went to the draft board office in Dillon. Stone enlisted in 1967 instead of being drafted. He signed up for the machine gun and was in the infantry. He was stationed in North Carolina after enlisting. He received his basic training there and was sent to California where he was shipped to Vietnam. While in Vietnam, he volunteered to be a “Rat” before even knowing what a “Rat’s” was to do. A “Rat” was a person who went into the enemy’s tunnels to check for the enemy. He was given a 45 as protection as there was not much space in the tunnels. Of course, like most people serving, he was scared but he was also “pumped” at the same time.
After about 9 months of active war duty, his time was “short”. While there he was shot four times and was placed into rehab for nine months.
After leaving Vietnam, he was transferred to Germany then Alaska then Florida and finally to Fort Jackson, South Carolina.
He completed his time in service in Hawaii and became a driver. While there he learned to surf.
He enjoyed some good times and some bad times while in service. In Stone’s earlier years he was a little “rowdy”.
He returned home and married, had two children, and now has grandchildren.
Sergeant Stone captivated those in attendance with his remarks about his time in military service.
SFC Russell Williams had the history of the Blue Star Memorial.
President Mary Ricks and Mildred Mishue unveiled the marker. Afterwards Melissa Moody had the dedication of the marker.
Master Sergeant Retired Leon Terry Morris accepted the marker on behalf of all those who have served, are serving, and will serve in the future.
The wreath at the event was placed by the Yellow Jessamine Garden Club.
At the event was Allison Hurst of Myrtle Beach, Director of Coastal District of South Carolina.
President Mary Ricks thanked all for being present at the Blue Star Memorial event.
Miss Barbara Causey led those present in “God Bless America”. The benediction was by Pastor Scott Moody.
At the conclusion of the event, everyone went inside for refreshments. 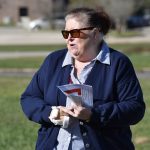 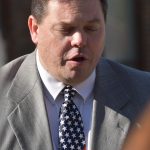 Pastor Scott Moody with the invocation 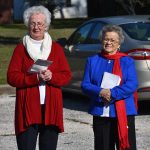 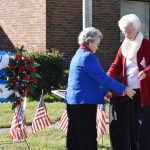 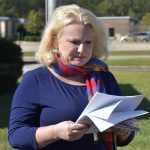 Melissa Moody with the dedication of the Blue Star marker 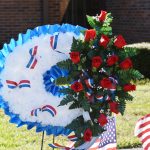 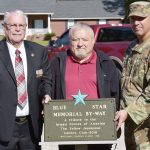 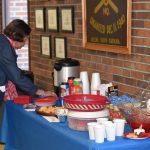 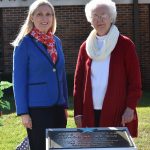 Mary Ricks and a special guest 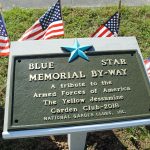 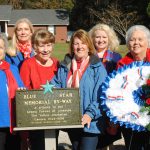