The Yellow Jessamine Garden Club met on Tuesday, October 2, 2018 at the residence of Cathy McDaniel. Ten members were present. 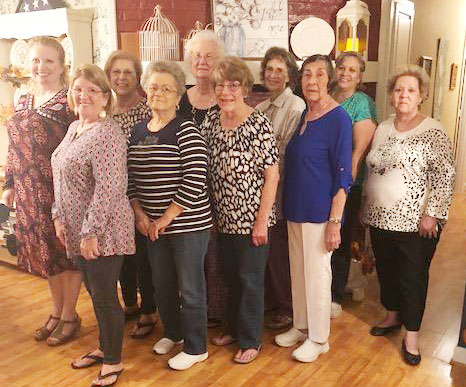 The meeting began with President Ricks welcoming all members and graciously thanking Cathy McDaniel for being the hostess. The beautiful fall arrangement of mums, carnations, sunpatiens and lantana were exhibited on the kitchen counter for all to see.
Melissa Moody then gave the devotion and blessing upon the refreshments. Honey bun cake, ham subs, homemade cheese ball and vegetables were served.
Roll call was given by the answering of each member’s favorite pink flower.
After the delicious finger foods, the minutes were read by Melissa Moody and they stood approved.
The educational program was bestowed in honor of Breast Cancer Awareness. It was presented by President Mary Ricks. She explained that this disease can be diagnosed in men and women. Some of the signs include change in shape, draining of fluid, and red, patchy skin around the breast. Early detection through a mammogram along with exercise, eating healthy and regular checkups is the best weapon against this disease. (NGC objective and goal: Study environmental sciences)
The treasurer’s report was read and stated the membership fees are due.
Larue Bracey, Membership Chairman, mentioned there were no new members at this time but encouraged each member to seek new members to join. She was thrilled to have the 4 new members join last month!
Projects and Litter Chairman, Mary Ricks, set a workday for J.P. Camp Roadside Park to be Saturday, October 13 at 9am. This will include replacing pine straw and gathering limbs.
Publicity chairman, Melissa Moody then distributed the newsletter to the members. She also mentioned the October birthdays which included her birthday on October 27.
New business considered was the Holiday Goodness Bazaar at The City of Dillon Wellness Center on November 17. Each member is to bring baked goods to sell.
Birds chairman, Frances Tyler gave a report on the American Robin and there was no unfinished business to entertain.
The next meeting is Tuesday, November 6 at 6:30pm at the home of Mary Ricks. Larue Bracey is presenting the November program on the variety of Daylilies and the maintenance for this beautiful flower. The hostess for the evening will be Mildred Mishue.
The week before the October meeting, the YJGC gathered at the Roadside Park, in honor of breast Cancer Awareness month. The Yellow Jessamine Garden Club planted a pink rose at the park. The club also placed pink flower pots in the shape of a breast cancer awareness ribbon. Several pink balloons were displayed as they represented BCA survivors in our area.
The Yellow Jessamine Garden Club is a member of the National Garden Clubs, Inc., South Atlantic Region, The Garden Club of South Carolina, Inc., and the Coastal District of the Garden Club of South Carolina.