By Betsy Finklea
Congressman Tom Rice and the South Carolina Ports Authority hosted an Inland Port Dillon Day on Wednesday, August 22nd.
A group composed of local government officials, state legislators, pastors, community leaders, and business leaders rode PDRTA (Pee Dee Regional Transportation Authority) buses and went on a mobile tour of the inland port.
After touring the port, the group returned to the City of Dillon Wellness Center, which was provided courtesy of the City of Dillon, for remarks
Dillon County Council Vice-Chairman T. F. “Buzzy” Finklea, Jr., welcomed everyone to the meeting and thanked Congressman Rice and the S.C. Ports Authority for hosting the event. He said the inland port is a big asset to Dillon County and the entire Pee Dee area.
Rodney Berry, Economic Development Director for Congressman Tom Rice, also thanked everyone. He said those gathered in the room are “our team” and that the area possesses the critical components to put us at the front of the line. “It’s our turn,” said Berry, who said he wanted everyone there to be ambassadors of the port.
Congressman Rice said he was amazed by the turnout. He said the purpose of this event “is to let you know this is real.” He said Inland Port Dillon is “one of the biggest pieces of infrastructure created in this state in a decade.”
Rice said there were about 90,000 people in the Dillon-Marion-Marlboro County area, and about two-thirds or 60,000 people are in the workforce. He explained that when a company that brings in 600 jobs makes an impact of a one percent drop in unemployment. Rice said when unemployment goes down that crime goes down and drugs go down and prosperity and pride goes up and the community is lifted.
Before the inland port even opened, it had attracted 1,100 jobs and caused a drop in unemployment to last month’s figure of 4.7 percent.
Rice also pointed out that the inland port “is not a guarantee. It’s an opportunity.”
“If we don’t take it, shame on us,” Rice said.
Rice said the opportunity is on the ground, and we have got to help the young people take advantage of it. He said the statistics show that our communities have shrunk, and he attributes this to the lack of opportunity for the best and brightest young people leaving the community to find opportunity elsewhere.
“This is an incredible time,” said Rice. He said there was “such as incredible reason for optimism.”
Rice said some investments in the past that may have been controversial at the time are now paying off.
Rice said they need to get the young people plugged in.
“This is a generational opportunity,” said Rice. “It is up to us to take it.”
Michael Hoffman of the South Carolina Ports Authority said Dillon is the second inland port in the state having opened in April 2018. The Dillon Inland Port is 160 miles from Charleston.
Inland Port Dillon is completely owned and operated by the South Carolina Ports Authority. They partner with CSX for rail service and next day rail service is offered. It created a greener supply chain to reduce truck emissions.
Inland Port Dillon helps companies like Harbor Freight Tools shorten their logistics chain. Hoffman noted that land in this area is plentiful and fairly inexpensive. They are located in the middle of an agricultural area. There are many natural resources.
Hoffman spoke about the Port of Charleston and the harbor deepening. He said they were in a position to become one of the leading ports on the East Coast. He also spoke about Inland Port Greer and said it was a great success. He said he feels Dillon will have similar results.
Several companies are locating or are expected to locate in the area due to the inland port. He said they were excited about the growth among the area.
Bishop Michael Blue was the last speaker. He was reared in Sellers and is sincerely sensitive to the plight of the area and the state. Blue said one of the key challenges in the area is the hopelessness among the constituents. He spoke about IMPACT Marion County, which addresses empowering the workforce and shifting the mindset. He said we were a 20th century workforce with a 21st century opportunity facing us. “Our people lost hope,” said Blue, who said when people lose, they lose the vision.
Blue said one person’s vision can start a ripple effect. He asked that all embrace this great idea.
After Blue’s remarks, Bishop Joe Grice offered the blessing. Those in attendance enjoyed a meal catered by Shuler’s Barbecue. 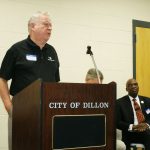 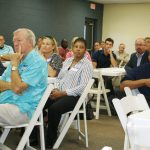 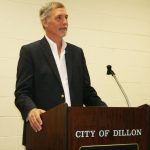 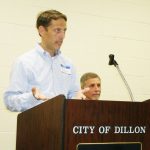 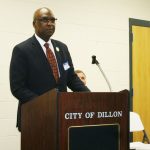 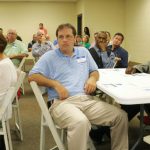 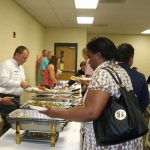 END_OF_DOCUMENT_TOKEN_TO_BE_REPLACED

Make everything as simple as possible, but not simpler.
Albert Einstein
The best way to cheer yourself up is to try to cheer somebody else up.
Mark Twain