By Betsy Finklea
A special session of the South Carolina Court of Appeals was held at the Dillon County Judicial Center on Thursday, June 14, for the presentation of a commissioned portrait of the Honorable James E. Lockemy, Chief Justice of the S.C. Court of Appeals.
The portrait artist is Jan Fleming Smith.
The presiding judges at the event were the Honorable Tom Huff, Senior Judge, South Carolina Court of Appeals; the Honorable Aphrodite K. Konduros, South Carolina Court of Appeals; and the Honorable Stephanie P. McDonald, South Carolina Court of Appeals.
Dillon County Clerk of Court Gwen T. Hyatt called the session to order.
The invocation was given by Bishop Michael Goings, pastor of Outreach Family Fellowship Church in Dillon. He noted that this was a special historic event and that this portrait would be the first to hang in the Judicial Center.
The welcome was given by Justice Kaye Hearn of the South Carolina Supreme Court. She described Lockemy as the “quintessential renaissance man.” She said he was a great patriot, a brilliant jurist, an accomplished actor, a coach, and a wine cellar connoisseur.
Hearn said Ralph Waldo Emerson said that “nothing great was ever achieved without enthusiasm.” She said Lockemy has enthusiasm.
Hearn recognized several judges, members of the General Assembly, and other officials and dignitaries who were in attendance.
Stevie Grice, chairman of the Dillon County Council, said it was appropriate to recognize Judge Lockemy on Flag Day. He spoke about Lockemy’s service in the S.C. House of Representatives, in the S.C. National Guard, as a Circuit Court Judge, and in the Court of Appeals. He said that it was with pleasure and pride that he was able to recognize Lockemy’s lifetime of service and expressed his deep appreciation for what Lockemy has meant to Dillon County and South Carolina.
Remarks were given by Alex Cash, Esq., Former President of the South Carolina Association for Justice, and George Jebaily, Esq., board member of the South Carolina Association for Justice. Jebaily said Lockemy was a “unique and special person.” He said “renaissance man” sums up Lockemy well.
Cash said they choose the portrait honoree based on their outstanding contributions to justice and their advocacy for fairness in the law. He said Lockemy exemplifies this, and they unanimously chose him as the portrait honoree. He applauded his public service.
W. Shipp Daniel, III, Esq., President of the Dillon County Bard Association, said this honor is just the next in Judge Lockemy’s long list of accomplishments. He said that the people of Dillon feel a sincere sense of pride because of who Lockemy is. He said Lockemy’s door and heart is always open. He said Lockemy always has been and always will be Dillon County. He said when the portrait was commissioned many thought that it would be hung in Columbia, but Lockemy was insistent that it be hung in Dillon County. He said Lockemy is in a word—”Dillon.”
Lockemy then made remarks. He recognized all who made this day a reality, his family, and several others who were in attendance.
He reflected on his childhood in Newtown and his life and career over the years. He spoke about his pride in Dillon County.
He then explained some of the significant things shown in the portrait. The flags represent his military service. His cuff links represent Dillon County. His robe shows his commitment to justice. The ring on his finger is a Citadel Ring. He forgot his ring for the portrait sitting and borrowed one from a friend, Bill Thomas, and that is the ring in the portrait.
Lockemy said he has 36 years of service and counting. He spoke of a column by the late Dolph Braddy which was called James Lockemy: A Public Servant. He spoke about his concern that Judge Lockemy was doing too much and that he needed to choose the important things and let go of the unimportant things. Lockemy said to him all things in Dillon County are important. “I am proud of Dillon County,” Lockemy said.
The ceremony moved to the lobby after Lockemy’s comments. The colors were posted by the Volunteer Veterans Honor Guard. The pledge of allegiance was led by Brigadier General Jim Green, JSO, SCMD. The grandchildren of Judge Lockemy and two of the justices unveiled the portrait, which had been hung by Tony Caulder.
Dr. Ricky Rogers of Open Door Community Church in Dillon gave the benediction.
After the portrait unveiling, guests enjoyed refreshments.

PHOTO GALLERY
Photos by Johnnie Daniels and Betsy Finklea/The Dillon Herald
Click once on a photo to bring it into a single screen and then again to enlarge. 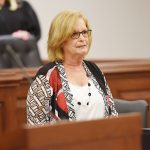 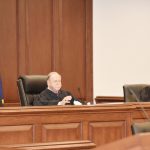 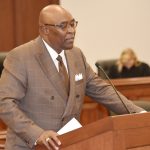 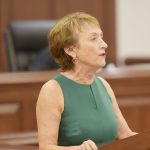 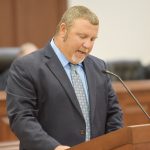 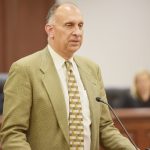 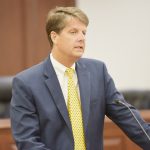 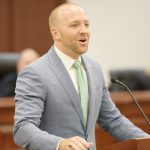 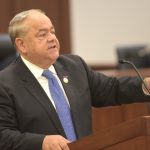 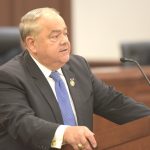 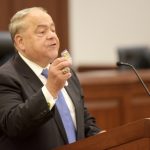 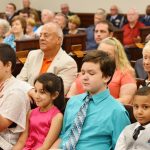 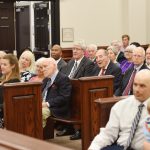 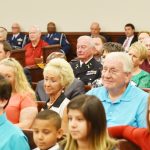 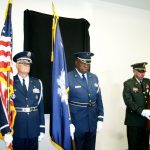 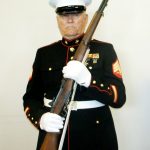 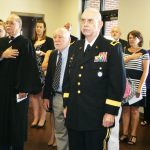 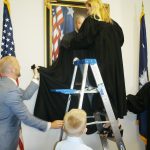 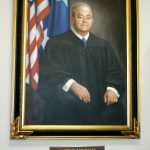 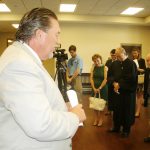 There are no shortcuts to any place worth going.
Beverly Sills
Life would be infinitely happier if we could only be born at the age of eighty and gradually approach eighteen.
Mark Twain
+81
°
F
H: +81°
L: +58°
Dillon
See 7-Day Forecast