Each year, IES Abroad, the leading not-for-profit study abroad organization, recognizes a study abroad professional with the Lifetime Achievement Award.
IES Abroad proudly presented this year’s award to Dr. Larry Jones, retired Director of the Office of Global Education at Sewanee: The University of the South, Sewanee, TN.
The Lifetime Achievement Award recognizes an individual who has served the study abroad field through significant professional and volunteer work. Recipients are leaders in the study abroad field whose careers have been distinguished by significant achievements and contributions. The awardee is chosen by IES Abroad’s Nominations Committee, composed of study abroad professionals from top tier colleges and universities across the United States.
Dr. Jones is a native of Latta, where he grew up and is a graduate of Latta High School. Dr. Jones is also a graduate of Wofford College, Dr. Jones earned his B.S. in Biology and was Phi Beta Kappa, graduating summa cum laude with high honors in biology. He also holds a Ph.D. from the University of North Carolina, Chapel Hill in Botany with a specialization in Plant Physiology.
The IES Abroad Lifetime Achievement Award is bestowed upon Dr. Jones for his dedication to the study abroad field— he has served on or chaired 57 college or national committees in addition to his extensive service to the field of study abroad.
Throughout his career he has taught at a range of institutions including Swarthmore and Reed colleges. He taught at Sewanee for 39 years where he also served as Associate Dean and Director of Study Abroad.
As a professor of biology, and having served as chair of the Department of Biology, Dr. Jones taught topics including genetics, plant physiology, botany, fungi, algae and bryophytes, plant growth and development, biology of lower plants, as well as introductory courses in cellular and molecular biology, population biology. Dr. Jones also taught current topics in biology, as well as a course entitled intercultural explorations in living abroad. He is equally productive as a researcher having published a 3,100 page 6-volume set of books entitled, “Fruit of the Pocosin.”
He is also listed in “Who’s Who in America,” “American Men and Women of Science,” “Who’s Who in the South and Southwest,” “Who’s Who in American Education,” “Who’s Who Among Emerging Leaders in America,” and “Who’s Who in Tennessee.”
Dr. Jones has also played a very active role in IES Abroad having served on the IES Abroad Annual Conference Planning Committee, the IES Abroad Nominations Committee, and as an institutional representative from the University of the South. He has also participated in 10 site visits all over the world for IES Abroad, and co-chaired the IES Abroad-sponsored Symposium on Science and Study Abroad at the University of Durham. He was also awarded the IES Abroad Volunteer of the Year Award in 2014.
“I have had the great honor of working with Dr. Jones for 20 years, and I have found him to be a gentleman, a scholar, and a renaissance man in the truest sense of those terms,” said Dr. Mary M. Dwyer, President and CEO of IES Abroad. “He is warm, gracious, generous of spirit, very bright and giving of his time to students and fellow colleagues and has mentored so many professionals in the field during his 23 years within the field.”
Founded in 1950, IES Abroad is a global, not-for-profit academic consortium of more than 240+ top-tier American colleges and universities that provides premier study abroad and internship programs around the world. With more than 120 study abroad programs in 35 locations worldwide, the organization creates authentic global education opportunities for more than 6,300 students annually. IES Abroad has more than 110,000+ alumni who have benefited from studying in IES Abroad programs since its inception. 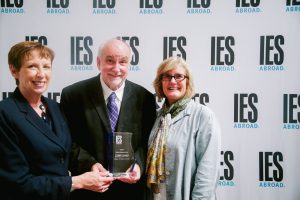 Humility is not thinking less of yourself, it's thinking of yourself less.
C.S. Lewis
The function of education is to teach one to think intensively and to think critically. Intelligence plus character - that is the goal of true education.
Martin Luther King, Jr.
+81
°
F
H: +81°
L: +58°
Dillon
See 7-Day Forecast